Urban Sketching in Enniskerry Village: A Trip Down Memory Lane 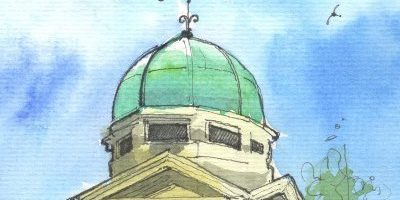 Urban Sketching in Enniskerry Village: A Trip Down Memory Lane
‘
By Róisín Curé

[twitter-follow username=”roisincure” scheme=”dark” count=”yes”] If you like this please +1 it!
Thirty five years ago, I spent far too many cold winter nights standing at the Clocktower in the village of Enniskerry, Co. Wicklow, waiting for a lift home. The Powerscourt Arms Hotel is just inside the village proper, and it had a payphone in the foyer. If I had change for it, I could make a call home to ask for a lift, and although my parents usually dropped everything to come and get me, a lift was often unforthcoming. Perhaps no one was available, or not for a long while. I never arranged things in advance as I wanted the illusion of being my own boss (!) so I had a choice either to wait in the dark, deserted village in the cold (it never occurred to me to wait indoors somewhere), or walk those three dark miles home. We’re talking the Wicklow Mountains, and that means lots of huge trees lining the narrow, twisting roads, making for pitch-black walking. Unfortunately, I have always been afraid of the dark. My father would try to allay my fears with a joke. “Do you really think some man is going to spend hours crouching in the dark, freezing his backside off, bored to death, on the off-chance you might pass?” he’d say. It wasn’t the crouching men I was worried about, but silent eyes, running hooves, evil…I had imagination issues. Sometimes it was so dark on that road I would have to run my hand along the wall next to the ditch to keep going in the right direction. Sometimes I fell into the ditch. Once I decided to wear my new Sony Walkman headphones to make it less scary, but it was much creepier with them on. Sometimes I hitched a lift, which was usually fine, but occasionally resulted in being in a confined space with a weirdo. When I turned eighteen I left home and those long walks home, and I have not spent more than a minute in Enniskerry in thirty years. This is a PREMIUM access article. We use a simple to use web wallet that can be filled up using a credit card, PayPal or with XLM using a secure payment system. Once you have paid, you will have ongoing access to the article from the device (tablet, phone, PC) that you used to pay for it. You can access the post by topping up your web wallet with 20 stellar lumen tokens (the price of a stellar lumen is currently [price id=”stellar” fiat=”usd”] ) if you haven’t already done so and then making a micropayment of 2 lumens to continue reading this post   Remember: NO subscription required, NO monthly fees, NO personal information, just a new secure micropayment mechanism for content you want to see. How it would have comforted me on those miserable nights to have had a vision of the future, even for a split-second. To see some future me with a handsome husband and lovely children, and wheels of my own! And to have seen myself in Enniskerry once again, sitting in the sunshine outside the Schoolhouse for Art in the heart of the village, sharing my passion for urban sketching with an audience of enthusiasts. Enniskerry is as pretty as they come and perfect for urban sketching. It’s tiny, and the buildings are Victorian and picture perfect. Steep roads lead up and out of the village on all sides, meeting in the middle at the Clocktower. I was so lucky to be there: it was by mere chance that I was going to be around. I wanted to meet Brenda Malley, a fantastic artist and one of the original Urban Sketchers (was anyone else urban sketching around Europe in 1974?). Brenda is a tutor in the Schoolhouse for Art. It’s a wonderful art school in the heart of Enniskerry Village, run by Neil Condron and Jenn Walsh, which teaches all kinds of visual art, from sculpture to painting, pottery and drawing. It was having a Spring ArtFest open weekend and was offering all sorts of drawing activities to the public, as well as an exhibition of the work of some of its tutors and students, all free of charge, in conjunction with the National Gallery of Ireland and National Drawing Day 2016. Brenda suggested that I might drop in and share a few words about urban sketching with the visitors and I jumped at the chance. And so, on Saturday afternoon I chatted to a group of sketchers, from the beginner to the experienced, all about urban sketching: its definition and aims, the highs and lows, the kit and caboodle. I was in my element: I love to be in the spotlight, talking for Ireland about my passion, and then talking my way through a sketch, describing what I’m doing as I go. On Saturday afternoon, after the visitors had begun to disperse, I did a quick sketch of the Schoolhouse:

Jenn is the blonde lady on the left, the one who makes everything happen in the Schoolhouse, and she works hand in hand with Neil. The lady opposite her with the long dark hair moved away before I’d finished her, but Jenn was still there, so I gave her Jenn’s skirt and legs. That’s urban sketching in practice! The gent in the foreground is James Joyce, in the form of a wooden cut out. The cut out figure was what attracted me to the scene in the first place, so I gave it centre stage. Some folk are attracted by beauty, or action, as sketchers: for me, it’s quirky things like that always attract me as an urban sketcher. Early on Sunday morning, I put thoughts of Enniskerry to the back of my mind and made my way to Howth for a painting commission. I have no sense of direction – by which I mean I have none at all. When I leave a shop I’ve just been in, I often don’t know where I am. And after 25 years in Galway I can still get lost – and we’re talking miniscule town. So I got to Howth, but I’d never been before, and it took me rather longer than it might have. But I enjoyed the sketch I made there and will go back to finish it soon.

Later on Sunday afternoon, I returned to Enniskerry Village, as I’d promised to do another demo. Here are some of the sketchers who joined us. Although a thunderstorm threatened, it held off, and it was really hot…bliss.

That’s me in the stripy grey teeshirt, chatting to Anna, an artist who has recently started sketching after a long absence. She’s getting all addicted again. “I bring my sketching stuff up to bed,” she said. I know, Anna, I know. Ciarán is on the right. He was one of the lucky group of artists who accompanied Brenda on the recent sketching trip she led to the South of France, which you can read about on her blog (brendamalley.com). How I wish I could have been there. Ciarán is intrigued by the possibilities of urban sketching, and is hoping to join us on June 12th in north Galway for the next Urban Sketchers Galway meet-up: there’s a vintage car rally on in Castlehackett, near Tuam, so if you’re around, please join us. I made this sketch of the Clocktower in the hot sun, while fabulous jazz numbers played over the air, courtesy of Neil’s vinyl collection. I talked the audience through it: how I eyeball the initial shapes as I make them, making sure they aren’t wildly incorrect. They saw how I keep checking my proportions, and when I make lines with a pen, I don’t panic too much if they are wrong. If I draw the initial lines with a very fine pen, then I can pick out the ones I like in a heavier line, and the thin lines won’t be noticed at all.

I put in my little green car at the bottom: the car that means I won’t be walking alone in the dark anymore, the same car that my teenagers ask me to park at some distance from the school, because it’s so embarrassing – apparently it has no bonnet. I bought the car from my mother a while ago, and it’s made all the difference to my life, to my independence. My kids will appreciate that independence someday, bonnet or no bonnet… The little boy standing at the foot of the Tower made a nice addition for scale. He was holding a fake gun and taking aim at anyone who crossed his path. For the painting, I left lots of it uncoloured. This was more because the sky looked like it was going to burst any second, so I wrapped it up, but it didn’t in the end. As usual I used lots of indigo for my shadows and tried to keep the whole light and fresh with the loose application of different shades of watercolour, allowing water to blend the colours with ease. Meanwhile, Brenda was sketching away. She gave an urban sketching demo on Sunday too, and produced a beautiful sketch of the Clocktower, with the hot early summer sun making the east face glow.

Neil and Jenn are very keen on the ethos of urban sketching. They weren’t surprised to see an enthusiastic response from the public who visited the Schoolhouse over the course of the two days. “Where is the urban sketching happening?” was a question they heard over and over again. Brenda Malley, as well as being a natural urban sketcher, is a lifelong one. Now she intends to start a new chapter: Urban Sketchers Leinster. With someone as active, generous and enthusiastic as Brenda at the helm, it promises to be an exciting group for anyone in the East of Ireland. And what a wealth of subjects they’ll have at their fingertips! Glorious Dublin City, the religious buildings and monuments of the Ancient East…they’ll be spoiled for choice. Here’s another of Brenda’s sketches, showing her loose, expressive drawing style:

Brenda is a professional oil painter. I saw some of her stunning seascapes in the exhibition, and they left me longing to try it for myself. But Brenda adores the immediacy and ease of urban sketching. She is also a fine writer, so she’s found a natural outlet in urban sketching, which is always enhanced by a few words. I was thrilled to meet her over the weekend, and now I want to get her to share some of her tips on oil painting! You can read her beautiful description of the weekend in Enniskerry on her blog, brendamalley.com. If all of this sounded like fun, it was. If you are a sketcher in the Leinster area, then give yourself a really huge gift and join Urban Skecthers Leinster! Watch this space, or subscribe to Brenda’s blog, for more details!