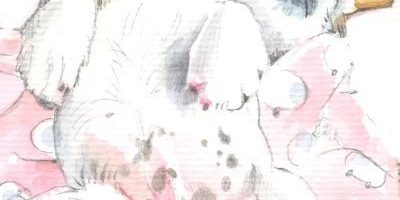 Sketching A Puppy: A Furry Artist’s Model
‘
By Róisín Curé

[twitter-follow username=”roisincure” scheme=”dark” count=”yes”] If you like this please +1 it!
“It should be banned,” said my husband Marcel. “What should?” I asked. “Bringing puppies into the school yard.” This is a PREMIUM access article. We use a simple to use web wallet that can be filled up using a credit card, PayPal or with XLM using a secure payment system. Once you have paid, you will have ongoing access to the article from the device (tablet, phone, PC) that you used to pay for it. You can access the post by topping up your web wallet with 20 stellar lumen tokens (the price of a stellar lumen is currently [price id=”stellar” fiat=”usd”] ) if you haven’t already done so and then making a micropayment of 2 lumens to continue reading this post   He had a point. Our younger daughter Liv, who is 11, had been begging for a dog for the guts of two years. The wailing, weeping and berating was driving us both nuts. The torture would start most days the second she arrived in the door from school, before her schoolbag had even hit the floor. “Well? Have you thought about getting me a dog?” she would demand. Marcel would give the reasons why we weren’t getting a dog, then he’d go back to his office, and I would have to listen to the usual stuff while I made her a sandwich. “It’s not faaaiiirr!” she’d wail. “Why is my life so miserable!! Why don’t I have a dog!!! ALL my friends have a dog!” (Weeping, head on arms, slumped on table.) Things would then get worse, and culminate in her stamping up the stairs so loudly that one would fear for their survival. The begging would ebb and flow. Some days it would appear that Liv was accepting the reasons we weren’t getting a dog, but then someone would bring a puppy into school, and the whole thing would once again rise to a crescendo. There would be tears, shouting and stamping, and disappearing into offices, and the whole shooting match. The reasons why we were so against it could all be boiled down into one thing: Marcel and I wanted to be able to go to Paris for a weekend, say, or Mauritius for six months, You know, dreaming. A dog would put the kibosh on all of that. Liv didn’t care one whit about weekends in Paris: life was divided into today, and some dreamy future where she was baking all the time and running a café. Eventually it all became too much. I came around, and suggested to Marcel that we should get a dog after all. (I thought that sketching a puppy would come in useful, too.) He was dead against it. “So let me get this straight,” I said. “Because you don’t want a dog, I have to not have one for the rest of my life?” “Yes, unless we get divorced,” he said (he’s a great advocate of bringing in the D word right at the start). “If you wanted an elephant, would that mean we had to get one?” What could I say to that? But Liv kept it up, day after day. One morning, just after she had slammed the door behind her in yet another enormous strop, Marcel turned to me and said his piece. “I’ll agree to a dog,” he said. “On three conditions. One, is has to be small. In fact it has to be a Jack Russell to catch the rats. Two, I have to not know a single thing about where it goes to the toilet. And three, it can only happen after August. I want a few more months of freedom.” “Fantastic. You can tell Liv,” I said.

Liv went very quiet when her daddy told her she was getting a dog after all. She explained to me over the ensuing days that she was in shock, and she couldn’t take it in. “Mum, you know the way I’m an atheist,” she said. “Well, earlier the same day Dad that told me I was getting a dog, I prayed to God that Mum and Dad would launch it on me after school that they’d decided to get me a dog after all.” “Well then,” I said. “Maybe that should make you rethink things.” After that, I started to look for a dog the modern way – on the internet. After a few days I had decided it was either going to be a poodle or a Jack Russell. I read that poodles are very sensitive, and that they pick up any upset in the family. I thought that might persuade everyone to keep the screaming and shouting at each other to a minimum. Then I read that even two weeks away from your poodle without grooming would mean mats everywhere. I can’t be doing with that, so it was back to Plan A, a Jack Russell terrier. I wanted a smooth one to make drawing her easier (for Liv insisted she would only get a girl dog) and the search was on. I would have gone as far as Belfast or Cork – the UK was a bit too far, even for the perfect dog, because the expense would be silly. I got in touch with the rescue organisations and awaited a home check, called into a neighbour who knows people who breed very nice Jack Russells and trawled the internet. We had had lots of dogs over the years, with greater and lesser degrees of success, and I wanted to try and get it right this time. (I wrote a short graphic memoir in 2012 called Four Legs Bad, about the perils of pet ownership. It was sort of lament in comic strip form.) Then I got lucky – I found a wonderful breeder. And she lived in Galway! At most that would mean two hours’ drive through Connemara. But my luck was in – Annie Taylor only lives ten minutes away. We went to visit her, just to see her dogs, see what she was planning in terms of breeding from her pack. “Would you consider a boy pup?” I asked Liv on the way down to Annie’s. “No!” she said. “Only a girl can understand what I go through!” But there in Annie’s garden was a tiny little fella with grass-stained paws. Liv fell immediately and heartily in love. I spoke to Annie about the possibility of needing long-term kennelling – no problem. “Any pup of mine is welcome back,” she said. “He’d fit right in and he’d be no trouble at all.” That arranged, I rang Marcel. “What about August?” he said. “And we were getting a female? And a smooth-haired pup?” “Those things don’t matter,” I said. “It’s much more important to get the right dog, and the right dog doesn’t materialise on command.” The day after the puppy came to live with us, Liv asked me to bring him into school, so that she could introduce him to all her friends. “It’s payback time,” said Marcel. The puppy has been a wonderful addition to the family. Thanks to Dr. Ian Dunbar’s work of pure genius, After You Get Your Puppy, training has been a doddle, from toilet stuff to fetch and sit and all that kind of thing. The only drawback has been the early rises for me, but it’s beautiful in my garden at that time of the morning at this time of year, with sheep bleating and birds singing, and new leaves on the trees, and the (unmown) lawn covered in wildflowers. And of course now I have a furry artist’s model: so far, I have been enjoying myself immensely.

I used white gouache and a white gel pen on tinted paper for this sketch, which made drawing all that white hair much easier. Meanwhile, Annie, our breeder par excellence, has also had a new arrival. Her last litter came along just a week ago, and there won’t be any more babies for the next year or two. She kindly allowed me to draw Nina, her border terrier, and her beautiful babies.

The babies look like miniature seals, with black and tan glossy fur. They still have their eyes firmly shut against the scary world, and make adorable squeaks when thet sense their mummy isn’t nearby. “When they’re a little older,” said Annie, “their tails stick up when they start to feed. As they fill up, their tails drop, until by the time they are full they have dropped fully. Like a tiny milk gauge!” I loved the atmosphere in Annie’s kitchen as I sketched. We chatted about our days with babies on the boob and how beautiful those days were. It’s just one of the most special things a woman can experience, and we were very privileged to have been able to enjoy such a natural, human – and animal – thing. Annie told me stories about the dog breeding and showing world, some of which made me laugh so much that tears rolled down my cheeks. “Please, please write a blog about it,” I said. “I can’t,” she said. I understood. Maybe I’ll find someone else who’s doing it – but they won’t be as funny as Annie’s blog would be. Since our hairy baby came to live with us, the vibe in the house has changed. Now it’s not unusual to see me on the sofa, each of my arms wrapped around one of my daughters, the pup draped across us, so that all three can have a bit of him to stroke. And even when teenage – and adult – tempers are frayed, scooping up the puppy, who is very obliging, calms the nerves wonderfully. Happy days.