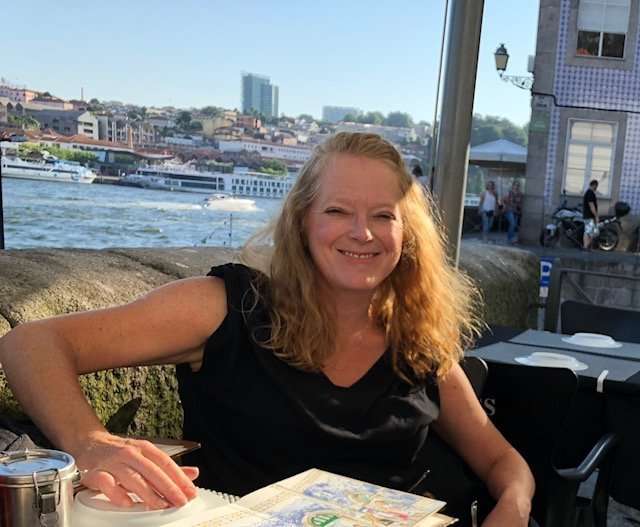 Hello! I’m Róisín Curé. I live in the county of Galway, on the west coast of Ireland. It is wild and natural over here, and in summer the country roads feel like a timeless paradise. In winter it’s a paradise too, except the fact that you have to be in your car or in a building because the weather is so crazy kind of dispels the illusion.

You’ll have figured out by now that I sketch a lot. I write as much as I draw, but I consider myself neither writer nor artist. I can’t figure that one out. I would think that the fact that I sold my first paintings – four little gouaches of flowers – at the age of fourteen, and that I have thought mainly about art since I was about 7, would have convinced me, but no. And I was always the one to write the longest letters, make the homemade comics, turn in the craziest essays…not to mention publishing three books in the last three years – but the word “writer” still doesn’t fit.

I didn’t take the normal route to get to where I am now., but the truth is there isn’t any normal route to becoming an artist. If there were a route, it would be known, and artists create something that has never been done before. (If you think all of art has been done before, all music, all fashion, if you think there is nothing new under the sun, then you are not an artist.)

I didn’t go to art college, other than a year when I was 17. My late teens and twenties were a whirlwind, following my latest whim, my latest crush, my latest dream. It was all part of the journey, and it led me to a science degree and then a Master’s (in geology) along the way. Following an urge to travel, I picked up French and Spanish, in which I am completely fluent. I now teach in both languages as well as my my mother tongue.

The other part of the story is that I knew I was destined to be a famous artist from the time I was a tiny girl. But knowing something is your destiny, and it actually coming to pass, aren’t the same thing. What is certain is that if you know something is your destiny, but it refuses to actually happen, your mind isn’t going to be a happy place. The years I spent from the time I left school, travelling around Europe and attending university, all the way up until my children arrived, were marred by a general mental anguish, interspersed with lots of euphoric points. Undiagnosed bipolar disease? An artist’s mind? Just general disappointment in the way life had turned out? Who can say?

The malaise got worse as the dream seemed to drift ever-further into the mist. I am sure the fact that I was rearing three children in a two-room hovel while our house was being built, hundreds of miles from my parents and siblings, with no job, financial freedom or any release whatsoever from caring for three little ones was a large part of the problem. That went on for six years and there were many times when I thought I had gone over the edge, that there was no way back to sanity. To make matters worse, I was diagnosed with an autoimmune disease in 2006, and for many years I was convinced my children were going to be motherless. The fact that my condition is extremely rare meant there were very few people I could talk about it with. My medical appointments were invariably with doctors, new arrivals to Ireland, whose English wasn’t great and whose bedside manner was nearly always pretty terrible, so I had no idea whether I would last until my kids were independent: only recently did a doctor actually say “you’re not going to die from this”. The uncertainty led to an unshakeable melancholy. (Good news: there’s almost nothing noticeably wrong with my health sixteen years later.)

In 2009 we moved into a half-built house, seven years after we received planning permission. It was very much unfinished and remains so to this day, although it’s looking better all the time, and, dare I say it, beautiful. I was still at the mercy of melancholic spells. I was sending work out to agents and publishers, which I had been doing since 2006 (when my youngest was 2), with no success. There were rivers of tears, of frustration, of sheer despair.

In 2012 it all changed. My husband, who is as whimsical and as impetuous as I am (a disastrous combination) decided he’d love to live in Mauritius, where his father was from, for a year. It turned out the most we could stay on a tourist visa was six months. After just a few weeks there, I discovered sketching from life, through a book my mum had sent to Mauritius with me for my birthday. That book was called Everyday Matters and the author is Danny Gregory. My 44th birthday was the day that changed my life. I was sitting in the relentless heat, by the tiny pool in our villa, halfway through the book. I looked up and said aloud, “Why am I not sketching?”

That was the start. I began to sketch anything at all in the vicinity. The pool, the palm trees, my birthday gifts, my glasses…after a few days of this I left the house. I was terrified but I was a woman posessed and had to go where my legs took me, with my cheap little paint set and paper that wasn’t suitable for watercolour. Soon it was wherever the huge, ancient Mauritian buses took me, or our little hire car. I entered a dreamy state where my mind’s only concern was to capture whetever was in front of me: the beach and its turquoise lagoons, the crazy hindu temples, the mosques, the tropical gardens. I wrote about the adventures that came with sitting around sketching, and maybe one day it’ll be published. I fell in love with writing.

Upon my return home to Ireland I joined the worldwide urban sketching organisation, which I discovered through Gabi Campanario’s “The Art of Urban Sketching”. I began to post my work in Facebook and Instagram. I wrote a little to go with each sketch. I started a blog. It took a few years to get anywhere – Irish stay-at-home mothers living in the middle of nowhere aren’t generally known on the art scene, or on any scene – but by 2016 I was leading my first international urban sketching workshop. To my satisfaction and delight, I made the students laugh, and they seemed pleased with the sketching tips I showed them. After that I taught in Ireland, the UK and Portugal. A few years later I taught in the 2018 USk Symposium in Porto, Portugal, then in 2019 in USk Amsterdam. I worked for the Irish, Spanish and Portuguese governments, showing off their countries through on-location sketches. In 2019, 2020 and 2021 I published three books on urban sketching, with three different publishers; the first contract I begged for, the second of my three publishers made the initial contact and the third was through a colleague of my brother’s. All three books did well and brought me new fans and followers. Then I started teaching online, and podcasting…

My podcast is called Sketch Therapist, and it’s all about sketching, and the good stuff that flows from it. It comes out on a Sunday, unless I can’t get somewhere quiet to record it, in which case it comes out the following day.

And that, ladies and gentlemen, is how your heroine comes to you today. No more malaise. No more lows. Just joy from creativity, and the peace that comes from being actively engaged in constantly challenging my mind.

That joy and peace is why I do what I do. I want to share the same gift that’s been given to me with you, and that’s where my classes come in. Try one of the free ones if you’re not sure – either way I wish you…