You are here:
Daily LifeFeature Articles 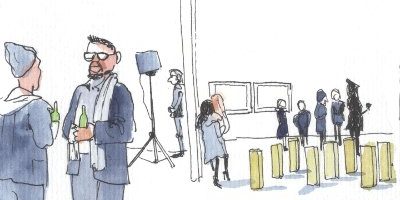 [twitter-follow username=”roisincure” scheme=”dark” count=”yes”] If you like this please +1 it!
The Tulca Festival of Visual Art takes place in Galway every November. It consists of two weeks of contemporary art exhibited in lots of venues throughout the city, from galleries to public buildings. You can find exhibits in UHG, and in the James Mitchell Geology Museum, as well as in more well-known gallery spaces around town like the Galway Arts Centre, Nuns’ Island Theatre and more. The old Connacht Tribune print works on Market Street is the main gallery of the festival and was where the opening of the exhibition was held. Last Friday I braved the cold, wind and rain to attend it, with the intention of sketching what I saw and soaking up the atmosphere. The exhibition is called Seachange, and aims to draw attention to climate change – and the concomitant disappearance of islands – using the mythological island of Hy-Brasil as a motif. So the exhibits all refer in some way to the sea or to the fragility of our existence on Earth. I had never heard of Hy-Brasil before Friday, but many people more learned than I know all about it. It’s a sort of make-believe, sunken island off the south-west coast of Ireland but if I say any more than that I’ll be out of my depth, so to speak.

You can access the post by topping up your web wallet with 20 stellar lumen tokens (the price of a stellar lumen is currently [price id=”stellar” fiat=”usd”] ) if you haven’t already done so and then making a micropayment of 2 lumens to continue reading this post   Remember: NO subscription required, NO monthly fees, NO personal information, just a new secure micropayment mechanism for content you want to see. The pile of limestone just in front of me was called Limestone Circle, by Richard Long. I didn’t understand what its message was. In the background you can see six rows of short beige pillars. These are made of compressed sand, which I thought was quite a neat trick. It is by Jason Deans and is called More Equal Than Others, a play on the theme of equality in George Orwell’s Animal Farm. Despite the sign on the wall which said Please Do Not Touch, some visitors were unable to resist doing so, and there were little finger-marks in the sand that put me in mind of those on a child’s sandcastle. Some of the pillars had ominous cracks near the base…all exactly as the artist intended, the idea being that each pillar of sand, while starting out equal, was vulnerable to interaction with whatever environment it found itself faced with…I think.

At first the crowd was quiet and somewhat subdued but I became conscious of the rise in volume as the complimentary wine and beer began to flow. The dress code was mostly black: floor-length black leather coats on some gentlemen, opaque black tights for many ladies, black jackets and black trousers and black beanies for nearly everyone. Scarves were worn with artistic aplomb. A man did impromptu yoga on the floor – you can just about see him behind the group on the left. Another man struck a funny pose and asked me to draw him, which I did, badly. Eventually a young lady approached. She had huge blue eyes and beautiful blonde curls. She was intrigued by the sketching, and was particularly impressed with my Field Easel Art Bag which allows me to draw and paint standing up. Usually it’s the tiny box of paints that gets onlookers excited. She gave me her contact details – fatal error! – so I aim to recruit her to Urban Sketchers Galway. Over the course of two days and in two venues, I drew some of the exhibits. I must ask for tolerance in my interpretation of them: although I looked up their meanings, as an artist I’m at the opposite end of the spectrum. I am literal in my approach and interpret nothing, whereas a contemporary artist takes a lateral approach and interprets everything. So the language of contemporary art is a bit complicated for me. I drew something that looked a bit like an umbrella printed with Euro symbols all over it. It was called The Mythology of the Tent and the two artists who made it are collectively known as Culturstruction. I asked the festival’s curator, Mary Cremin, to help me with my interpretation of it. “It’s a sort of superhero cape,” she said. “A place of shelter and protection. The Euro symbols refer to the collective assumption that the Euro would save us.” She did say more but I found it hard to follow. I did pick up that it is supposed to appear to levitate, a bit like a distant island, and indeed the suspension lines were so fine as to be invisible. I might add that the print job was much more skilfully executed than my drawing would suggest.

This next one is part of an installation and is called How Will I Know When To Go Indoors? by Dennis McNulty and Ros Kavanagh. It’s to do with a pamphlet that the Irish government issued in the 1960s on what to do in case of nuclear fallout. This part of it is made out of some sort of plastic bag with red tubes coming out of it and is hung at about a man’s height. I should have drawn a visitor to the gallery for scale. I didn’t find out what exactly it meant.

The next day I called into Galway Arts Centre on Dominick Street to see what was on offer there. I saw a rather attractive piece and immediately wanted to draw it. It’s exactly what you see in my sketch – a microphone poised to record the utterings of a rock – but what you can’t experience from my sketch is the recording in the background of basalt being spewed from a mid-ocean ridge. The sound of rumbling rocks was very soothing. The exhibit, along with its companion piece (a film of shadowy ocean images) referred to the demise of another imaginary island, but any more than that I can’t say as I got a bit confused, despite reading about it a bit. The artist is called Anaïs Tondeur and the soundtrack she made to go with it contained some lovely piano music – very French to my ears – and also very soothing.

The woman you can see reading in the background was manning the desk. I asked her if she could help me interpret the exhibition, and she was very helpful. She did her best, then pointed me towards something really special, something I’d missed at the Connacht Tribune print works. “It’s a glossary of Irish terms for water, and weather,” she said. “The idea is that language is intimately connected with climate and pysche.” She was speaking my language, as I have all kinds of strong opinions on that kind of thing. It got better. “It takes the form of a booklet. It’s displayed in the gallery, and there’s a bench next to it – you can sit and read the booklet,” she said. “At least I think you can – or why would there be a bench? And you can buy a copy too.” On my return to the gallery on Market Street I sat on the aforementioned bench and read The Water Glossary. Then I bought the booklet – the best €8 you’ll spend this week. I was enchanted. Here are some of the terms I read: fiachaire: raven-watcher, weather forecaster lá idir dhá shíon: a day of unseasonably dry, warm and bright weather. In the middle of the wet harsh days of Irish winter, meaning day in between two weathers. salachar baistí: drizzling mist or rain síor-usice: constant rain maidhm baistí: cloudburst scim: veil of haze or mist criathróir: animal surefooted on boggy ground slograch: sink hole, or a wet boggy corner of a field I was so enthralled by the effect of these lovely phrases that I wrote to the artist, Carol-Anne Connolly, to tell her how I felt. She sent me a most gracious reply. “It was fascinating searching, finding and looking through old dictionaries,” she told me. “Travelling to meet native Irish speakers was equally so, having great conversations about the nature of language. The project took me to woods, fishing ports, retired fishermen’s houses and radio stations.” These descriptive words about weather and rain and clouds conjure up so many snippets of my life, from early childhood onwards. Our climate stamps us with an indelible mark and it’s one of the things we long for when we’re longing for home – at least, I do. I’ll always remember my first night back home after a few weeks in the desert of Los Angeles. I wonder is there a word for the gentle hiss of rain at night accompanied by the distant bleating of sheep, with the smell of honeysuckle on the air…? I didn’t know what to expect from Tulca 2015. I do know that I’ve lost some of my prejudices about contemporary art. I neither wish to beat nor join them: I’m still going to get my kicks from recording everyday life in my sketchbooks – but discovering that little book by Carol-Anne Connolly was like stumbling across a beautiful poem. That piece has single-handedly made me broaden my definition of what constitutes art, something I had not predicted. I recommend a visit: you never know what you might find, and how your thoughts may change. Tulca Festival of Visual Arts takes place in various venues across Galway from 14th-29th November. All details can be found online under tulca.ie. [crypto-donation-box]
Categories: Daily Life, Feature ArticlesBy Roisín CuréNovember 20, 20158 Comments
Tags: art review