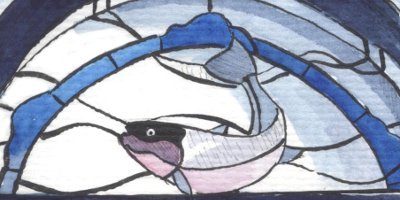 Discovering a Treasure: The Fishery Watchtower, Galway
By Róisín Curé

[twitter-follow username=”roisincure” scheme=”dark” count=”yes”] If you like this please +1 it!
I’ve lived in Galway for nearly 25 years, and in that time the most wonderful gems have passed me by, barely noticed in the hustle and bustle of everyday life. It has taken my urban sketching hobby to open my eyes to the glory that’s all around me, right here where I live. The Fishery Watchtower, Galway, is – or was – just such an unexplored treat. Walk down Quay Street in Galway City, through the throng of visitors, buskers, workers, students and the occasional vagabond and you come to Wolfe Tone Bridge, which crosses the rushing, racing River Corrib. After the intensity of Galway, your immediate sense is one of relief, as the wide open space of Galway Bay appears up to your left. At the foot of Wolfe Tone Bridge there’s a little walkway, spanning a few quieter metres of the River Corrib. The walkway leads to the Fishery Watchtower, a very pretty yellow building, designed in an Italian style that was popular when it was built in 1853.

You can access the post by topping up your web wallet with 20 stellar lumen tokens (the price of a stellar lumen is currently [price id=”stellar” fiat=”usd”] ) if you haven’t already done so and then making a micropayment of 2 lumens to continue reading this post   Two brothers by the name of Ashworth, Quakers from Lancashire bought the rights to the stretch of river which the Watchtower overlooks. The river was rich in salmon, trout and eels, and the brothers built the Watchtower to monitor stock levels, poaching activity and even to hang nets out to dry. They were not synthetic then and could rot – the Watchtower has doors or windows on all four sides, allowing for a current of air to pass through. I’d never darkened the door of the Fishery Watchtower until a few weeks ago. Driving past, I noticed that the door was open, and I had two hours before an appointment. As any urban sketcher will tell you…this is an excellent state of affairs! I crossed the little bridge and went inside. Two friendly guides greeted me, and explained that the Watchtower is now a museum dedicated to Galway’s fishy past. There are nets and rods of all types, a model of the Fisheries and photos of Galway in times gone by. My favourite was one taken in about 1913 of a proud-looking young woman dressed in a bright red cloak, covering every bit of her save her face. The photo was taken by two Frenchwomen who were travelling photographers, and I doubt that the open, relaxed expression in the face of the subject would have been there if the photographer had been a man. I only think that because her expression was so noticeably different to most of those I’ve seen from the early days of photography. The two guides were really helpful and didn’t mind me getting out my folding stool and sketching for a while. You can see from the picture of the tower above that the building is tiny. It seems even tinier on the inside, so it was very accommodating of the guides to budge over a little for me to draw. As soon as I looked up at the entrance door from within, I wanted to sketch the skylight above the door. I loved the stained glass, through which the morning sun streamed, illuminating a salmon and making it glow.

I returned a few days later with the intention of painting the beautiful view of the Claddagh and Galway Bay from the top floor window. It being Galway, however, and winter at that, my plans were thwarted – it rained heavily all day, so that the view from the window was just a grey haze, the pedestrians crossing Wolfe Tone Bridge mostly invisible under huge umbrellas from my position far above them. So I looked around at the understated taste of the top floor display, and found my vantage point easily.

The long brown tube in the centre of the sketch is an eel-fishing net. Many years ago, when my husband Marcel and I were newly married, Marcel did a stint fishing for eels along the Corrib. It was a night-time job, and Marcel said the eels were awful creatures – little red mouths, he said, with sharp little teeth. I believe they’re very popular in the Low Countries, where the catch was exported to. I mentioned this fact, my eel pedigree, to the guide. “I’ve seen cormorants catching eels just there at the bottom of the tower,” he said. “They throw the eels up in the air to get them in the right position to go down their throats in a line.” “Amazing!” I said. “Do they kill them first?” “Yes,” said the guide, “they stab them or whatever.” I said this to another guide on a subsequent visit. “Sometimes they’re not quite dead,” he said. “You can sometimes see the cormorants’ throats moving about with the eel wriggling around. They must have some stomach acid to deal with that.” “Surely,” I agreed. The fork on the wall to the right was our answer in times gone by to the cormorants’ elegant way to catch eels. (A New Zealander visited the Museum while I was sketching. “Friends of mine were watching ducks on a lake once with their children,” he told us, “two parents, followed by a row of ducklings. It was all very lovely and then a cormorant appeared behind the last duckling, and gobbled them up, one by one.”) On the ground floor, there’s a really spectacular window overlooking the River Corrib. It’s in full spate at the moment, a raging torrent hurtling its way from Lough Corrib where it rises. We’ve had heavy rainfall lately, and to see such an uncontrollable deluge thundering alongside the civilised banks of a modern city seems incongruous…as if we are only fooling ourselves that we’re in charge. Walking past it last night with my fourteen-year-old son Paddy was almost shocking. We looked over the bridge and peered at the boiling rapids in the dark, a few feet from where we stood. “It looks…so inviting,” said Paddy. I know what he meant. It’s that crazy half-feeling you get of throwing yourself in that you sometimes get looking over the edge of a ferry. “You’d last about three seconds, you know that,” I said to him. There is no way you’d get out alive the way it is at the moment – and to think that in my youth I kayaked down the Corrib, past the Spanish Arch into Galway Bay, just the once, under no supervision whatsoever. I was a novice, and an experienced kayaking friend told me it was madness. Back to the tower: I very much wanted to sketch the beautiful stained-glass window that overlooks the rushing water. The window is original, although a couple of the pink panes had to be replaced. You can tell which are the original panes – they are the ones with the more delicate, paler shade.

One of the very wonderful group of sketchers from around the world, with whom I’m in touch via Facebook and so on, astounded me with a comment. “Is that Opera Pink by Daniel Smith?” she asked. I had to fetch my tube and check – indeed it was. I was amazed that someone could know their colours so intimately. Furthermore, she finds it hard to get the colour where she lives, making it even more impressive. I should send her a tube just for her cleverness. Or Daniel Smith should. A strong sense of time surrounded me during my visit to the Fishery Watchtower. It’s wonderful to see oneself as a small, insignificant being on a long, long thread of history. I look forward to discovering more hitherto-unknown wonders that have been part of the fabric of Galway for centuries…and sharing them in words and pictures with you. Entrance to the Fishery Watchtower is free and well worth a visit. Make sure to check the winter opening hours, as they’re a little sporadic at the moment. [crypto-donation-box]
Categories: Feature Articles, Painting in IrelandBy Roisín CuréDecember 14, 2015Leave a comment
Tags: Galwayhistoric buildinghistorywest of Ireland