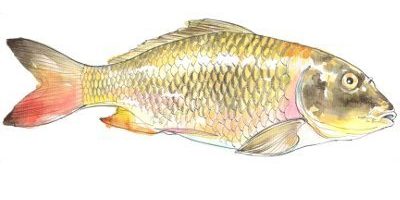 In my garden is a pond. There are two levels, and there was supposed to be a waterfall connecting the two. We got as far as buying a pump and installing the metal plate with the curved lip over which the water would flow in a sleek and contemporary style, but the theme of our garden is more “relaxed”, which is to say that the lawn is always unkempt, there are weeds everywhere and I don’t sweep up what few weeds I do pull out as often as I should. So I feel a sleek, contemporary waterfall would have looked absurd, as if a passing gardener with a penchant for modern designs suddenly decided to try out an idea on this clearly abandoned garden.

But the upper pond held a secret. There were five beautiful koi carp in the pond, pale gold, orange, red and white. They could never be seen because the water was opaque, but apparently this was how the fish liked it, which they proved by producing a family of baby koi. Living in opaque water also meant the fish were safe from the many herons flying overhead. The fish were happy in the pond for years and years, even during three hard winters, during which there was a thick layer of ice on the pond.
“Won’t they suffocate?” I asked my husband Marcel.
“No,” he said, “cold water holds lots of oxygen.”
Sure enough, they were fine, and come the spring and resumption of feeding, thrashed around happily.
I loved to feed the fish, then lay on the stone flags around the pond that had been warmed by the sun, and listen to the unfeasibly loud “plops” as the fish took the food. I usually dozed off but every now and then I would see a flash of an orange tail seemingly much too far out of the water for an aquatic creature. If you caught the eye of one of them, it would hurriedly disappear, with an expression that clearly said “Shit! It’s her!” We tamed them a bit by shaking the box of fish food as we approached, so that they’d all swarm to the surface.

One morning recently Marcel came in from the garden and said something I didn’t catch, but I knew from the tone it was bad.
He repeated what he’d said. “The fish are dead.”
The water was too warm, too green, too depleted in oxygen, and they suffocated. Only an hour earlier I had seen one of them close to the surface and wondered to myself why, since they didn’t usually do that. I didn’t report it to Marcel, who would have known what the problem was, and fed bubbling, oxygen-rich water into the pond. When he went outside, three fish were floating in the pond. I took them out, laid them on the stone flags and painted them. When I was done, I put the three fish in a nice shoe box and wrapped the box in a length of white cotton, which I buried in the front garden. Two fish remained undiscovered, and Marcel and I aerated the water for hours in the hope that they would survive. One of the fish whose corpse we hadn’t seen was Toto, the shy one, the pretty one, who had big red splashes on a white body. He was always the last to eat. Later on in the afternoon, I heard a scream coming from the garden. Our youngest, Liv, had found Toto on the lawn, his body having been fished out by birds (only a beak can pluck eyes). I consoled myself with the thought that Toto was already dead when he was fished out, for the birds would never have seen him otherwise. I put his mutilated body in the shoe box with his friends, and re-wrapped the cotton shroud around it. It’s buried in the front garden, weighed down by stones, and I’ll plant something nice on top.
That night I began the blame game and it went back and forth between myself and the husband. We didn’t feel any better for it.

Then the last beautiful fish made its way to the surface. He was divine – the biggest of all, with the most delicate pale gold body with a hint of shell pink. He’s now with his friends in the shoe box.
I suppose life goes on. I mentioned that the fish had had babies over the years. A day or two after the sad discovery, we discovered two young fish huddled in the corner of the now-clear pond…probably very traumatised, but we are determined to take care of these little fellas. They take after their pale gold parents, so I guess at least one of the fish was a “she”.

We’ll get more koi carp, but next time we’ll take better care of them.