You are here:
Painting in Ireland 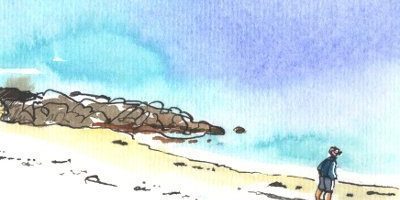 [twitter-follow username=”roisincure” scheme=”dark” count=”yes”] If you like this please +1 it!
My younger daughter Liv celebrates her birthday at the end of July. The downside of this is that her friends are often away on summer holidays. The upside is that the weather is usually good and she can do something cool outdoors. This year she turned twelve and decreed that we would celebrate her birthday with a camping trip: I love camping so that was fine with me. “We’re going for at least three nights,” she said. “That’s a lot,” said her dad. “If the weather isn’t great we should maybe consider cutting it a bit shorter.” Birthdays can turn the mildest of us into divas, and there followed much stamping, wailing and weeping. The camping trip approached and the logistics of keeping three teenage kids happy started to become troublesome. Paddy is nearly fifteen and will join in anything with great enthusiasm. Honor, the eldest, is sixteen, and has different priorities in her life right now. “There’s no way I’m going camping with you lot!” she said, except she didn’t say “you lot”. “Besides, I’m going camping with my friends on Sunday, so I can’t.” None of my pleading for reason made any difference, and it was all I could do to persuade her to join us for one night, never mind three. So I came up with a crazy plan – we’d drive west for an hour and a half to the beautiful Roundstone in Connemara the first night, then drive back south, past our house in Kilcolgan where I would drop her off, then motor on another hour down to Co. Clare, to the gorgeous Fanore beach, and spend a night or two there. I was banking on Roundstone to win her over. This is a PREMIUM access article. We use a simple to use web wallet that can be filled up using a credit card, PayPal or with XLM using a secure payment system. Once you have paid, you will have ongoing access to the article from the device (tablet, phone, PC) that you used to pay for it. You can access the post by topping up your web wallet with 20 stellar lumen tokens (the price of a stellar lumen is currently [price id=”stellar” fiat=”usd”] ) if you haven’t already done so and then making a micropayment of 2 lumens to continue reading this post   On the Saturday afternoon we drove through Connemara, and I was gratified to hear all three kids gasping at the beauty all around them. The lakes, the mountains, the mist…even the stone walls, which look very different to those of our home in Kilcolgan. They loved the hardy-looking horses and cows, lounging about in tiny fields full of exposed bedrock and wild flowers, fields so hilly that the beasts were lucky to find level areas big enough to lie down. The evening was beautiful and we headed down to the beach which fronts the campsite. It was heaven. Liv’s daddy, Marcel, gave her an early birthday present, a Kelly kettle which you stuff with twigs to boil water, and they went foraging happily for sticks together. We were already regretting that we’d have to leave the following day. There were countless small boys in the tent next to us. The woman in charge sauntered over. “I hope you don’t mind noise,” she said. “I’ve four boys and their cousin here…oh. hello! You can’t go anywhere without meeting someone you know!” It was a lady from Honor’s school. She was driving back home the following day and offered to bring Honor with her. Problem solved! Then we barbecued steaks on our little kerosene stove and drank wine from plastic tumblers, and got tipsy, being careful not to overdo it in case one of us should need to get up and go out into the dark during the night. The following morning it was raining, but it wasn’t cold or windy. I put on a raincoat and took the puppy, a Jack Russell called Reuben, to the beach. Even though I’ve visited Roundstone since I was about ten years old (it’s where my love affair with Galway began) I was astonished afresh at the beauty which greeted me as I rounded each rocky promontory along the pristine sand at the water’s edge. I was all alone. My feet sank into the damp white sand, leaving great clodhopping holes in my wake, and the puppy left tiny pawprints beside my track that didn’t sink at all. The water was unusually clear in the raindrops and is always turquoise in Connemara. I felt pure happiness. Back at the tent, the happy feeling quickly evaporated, as Honor was causing trouble, being mean to Liv. I needed to sketch but as it was raining my options were limited. The car offered shelter from the rain and a refuge from the bickering.

This didn’t go down too well. “You’re doing nothing to keep the peace,” said Marcel, and went back to his faggots and fire. Soon he brought me the fruits of his labour – a nice cup of tea. Eventually I decided enough was enough and suggested the girls did some sketching. Within a few minutes peace had descended and they were drawing each other happily in the tent, producing gorgeous work. Why can’t they do this of their own accord? Soon Honor had left us. “It’s not the same without her,” said Paddy. “She’s so funny.” The most tolerant brother in the universe. Later on that evening I sketched the beach. It was full of Dubliners from the sailing fraternity. Very tanned men yakked about sailing and their favourite restaurants, and beautiful blonde boys called Noah and Levi scampered about. Groups of kids played unsupervised, slightly violent games of tag. “So…if you’re touched, you’re on?” I overheard. “No, you have to thump the person on the arm three times and shout Tig Tag Tattle, then they’re on,” said the leader. They were clearly beyond excited to be allowed to play on the beach till the sun went down.

Next morning I sketched Reuben digging a hole. Just as I finished sketching him in action, he saw a little grey poodle and started playfully chasing her. She barrelled into me, covering my paintbox in sand. “Sorry!” said the owners. “She’s got cataracts and she’s blind!” “It’s fine!” I said. “Sure it was my lad’s fault!” But it wasn’t fine. The paints become encrusted with sand, and every time I used them the sand went a little deeper. In the end I scraped it off with a sharp blade but found that a thick mortar had developed on the inside of the box, which had to be virtually chipped off. I don’t mind when things like that happen, as it’s an excuse to fiddle with new paints and colours.

That afternoon, we drove further west to Clifden, where the sun beat down, having noticed that we were far from the beach. We decided we’d cook outside again when we got back to the tent, so needed to visit the supermarket. The family (that is to say, my husband) didn’t want to go into the supermarket without my direction but I had the puppy in a sling on my front. I figured I’d take him in like that, and just hide him under my sleeveless jacket if anyone looked at me strangely – he is very quiet in the sling, like a baby, and only his hairy little white head pokes out. This worked a treat. In the supermarket was a young mother wearing a proper human sling. An adorable baby with shocking red hair sticking straight up looked out, drinking in the exciting sights of tins on shelves and artificial lighting. “What a beautiful baby!” I said. “How old is he?” “Nine months,” she replied. “And yours?” “Five months,” I said, whipping off the jacket to reveal Reuben’s furry white muzzle. “OH!” she said. Little amuses the simple. The next morning was Liv’s birthday. Before she woke up I sketched the beach again.

I left it unpainted as I wanted to be back for my girl’s good morning “happy birthday”. Here is the remaining family, eating their brekkie in the tent.

By then, Liv was no longer insisting that we spend three nights camping, and was eager to get back home to open her birthday presents. This time our drive back through Connemara went unremarked by the birthday girl, who snoozed in the back.

So… Bugs in your sleeping bag or being at one with nature? Leaky inflatable mattress or gratitude for any mattress? Grass in your tea or pride that you’ve boiled water? Besieged by the rain or cosy in your tent? Squabbling kids or happy kids? Where do you stand on camping? [crypto-donation-box]
Category: Painting in IrelandBy Roisín CuréAugust 12, 2016Leave a comment
Tags: campingConnemarasketching