It’s A Knockout: Family Harmony on the East Coast of Ireland 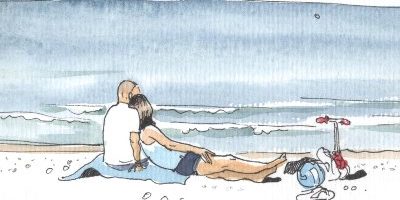 [twitter-follow username=”roisincure” scheme=”dark” count=”yes”] If you like this please +1 it!
My two younger children and I spent a few days on the east coast of Ireland last week. We were visiting my parents in Wicklow, whom some of you may remember in a typically snoozy-post-lunch pose I wrote about in a previous post. The kids and I were were delighted to be going to Bray, and there was much talk of the skateboard park on the Seafront and ice creams and that kind of thing. This is a PREMIUM access article. We use a simple to use web wallet that can be filled up using a credit card, PayPal or with XLM using a secure payment system. Once you have paid, you will have ongoing access to the article from the device (tablet, phone, PC) that you used to pay for it. You can access the post by topping up your web wallet with 20 stellar lumen tokens (the price of a stellar lumen is currently [price id=”stellar” fiat=”usd”] ) if you haven’t already done so and then making a micropayment of 2 lumens to continue reading this post   Remember: NO subscription required, NO monthly fees, NO personal information, just a new secure micropayment mechanism for content you want to see. We caught a Citylink bus from Galway and it is the most hassle-free and comfortable trip you can imagine, and they really should give me a free ticket for that, even though it’s already cheap as chips to cross the country with them. I looked at the two kids as they read their books and Kindle, played games and generally made me proud, and decided to draw them. Here they are, but you can’t see much of my daughter.

They get on like a house on fire 99% of the time. But then after a few minutes the peaceful scene changed. A sudden fight broke out between them and there was a flurry of limbs, bending fingers back, whacking…well, it’s all written there. The entire thing took place in silence (thank heavens) and lasted about two minutes. Obviously I tried to break it up but they were temporarily deaf, so I decided to try and draw them instead. Okay, maybe it went on a bit longer than two minutes.

The next day the first trip to the skate park took place. Oh, happy days – after an utterly miserable summer, the sun gods decided to shine on us in Bray and it was perfect weather. The kids skated happily and I drew one of the beautiful striped kiosks along the Victorian esplanade that line Bray Seafront (again, I’ve posted it here before). My aim is to draw them all – there are about six or so, in lovely seaside colours, and they have the wonderfully garish embellishments of bouncy balls and inflatable Minions.

We had a super couple of hours, and after another lazy lunch in my parents’ beautiful garden I grabbed a quick snooze in the sun while my daughter filled jars with pond water and my son tried to improve the performance of his skateboard. This involved sanding down his shoes but they’re on the way out so I didn’t mind that so much as the sanding noise invading my afternoon nap. Then my father suggested we all go for a swim, so after a while we found ourselves at the far end of Bray Seafront trying to summon the courage to brave the icy water of the Irish Sea. It was torture for the first few seconds but not too bad after that. My parents and I have become a bit soft when it comes to cold water but not so the kids, who are tough as old boots. My sketch was enjoyable but it’s incomplete, as my father was impatient to leave: he wanted to eat dinner before the sun left the garden. The man wading out on the right of the picture was the colour of a bottle of milk – I don’t know what came over me with the yellow ochre paint. I think it’s because the lady beside him was covered in the ubiquitous fake tan and there was yellow ochre on my brush.

Next day we visited Powerscourt Waterfall in the Wicklow Mountains, beside which I grew up. I’ve always wanted to sketch it but never managed to capture it as I’d like. I think this is because I am very used to drawing the mostly horizontal landscape of Galway, and the busy cityscapes of anywhere, but the thoroughly vertical and sylvian landscape of the Wicklow Mountains is something that I am not used to drawing, despite the fact that they are pretty much in my DNA. Here’s a sketch of the Waterfall I did two years ago:

This time I tried again, and I struggled with a sketch of the waterfall using masking fluid and all kinds of things, but failed. Next time I’ll try it with tinted paper so that I can hurl on the flowing water to my heart’s content. If you nip between the two trees on the far left of the above image and scramble down the bank to the river, you’re at the spot where we settled down. My mother painted and the kids made a dam (of course). In the sketch below you can see a poor attempt at the waterfall on the top left, where people stand in the spray on giant boulders and shout to be heard over the roar of water. I drew Mum and she drew me and the children. She broke her back last December and while she’s fully healed, her artistic mojo has yet to return, but I love what she did. She paints completely differently to me, with a very impressionistic style: in fact, she puts the water into watercolour, splashing everything in sight with every colour of the rainbow.

Here are the two children building their dam. It looks very harmonious and indeed it was, until a sudden fight broke out which I struggled to break up. It was short-lived but involved a lot of water. I’m starting to wonder if sketching my kids puts a curse of disunity upon them. My son looks much younger than he is in this but never mind.

My last sketch of the holiday was this one of a couple relaxing on Bray beach later that afternoon. They were very affectionate, and I was touched to see that they had a little guy in a baseball cap with them. That’s his scooter beside the couple. I could have sworn the horizon was drawn straight but I guess not.

I chanced another sketch on the bus on the way home the next morning. This time my daughter was beside me, reading a book of vintage Beano and Dandy comics a friend of my brother’s, a comic nut, gave the kids, who are fellow comic nuts.

She doesn’t keep still but it’s good practice for sketching rapidly. Back in Galway I had an hour or so to spare in the evening after dropping in a painting to a client in Salthill, close to the Promenade, which is on the far side of Galway from me. I love funfairs but they always seem beyond my ability – too much detail. Drawing this ferris wheel silhouetted against the sun made it a whole lot easier and reminded me that you don’t have to always paint detail, something I have to remind myself all the time. See if you can make out the flying elephant roundabout – it was so cute I couldn’t resist it, and it was the source of the screams of tiny terrified children that I could hear over the evening air.

Later on that evening my asked me, “When are we going up to Granny and Grandad’s again?” Tomorrow, as it happens…lucky boy. [crypto-donation-box]
Categories: Daily Life, Painting in IrelandBy Roisín CuréAugust 16, 20154 Comments
Tags: urban sketching