A Week in the Summer, Galway Style 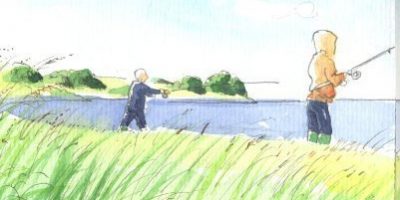 A Week in the Summer, Galway Style
By Róisín Curé

[twitter-follow username=”roisincure” scheme=”dark” count=”yes”] If you like this please +1 it!
My mother-in-law Erika visited Mauritius many times after her marriage, as her husband Serge was a native of that tropical island. During one such visit she had some furniture made for her by a Mauritian-Chinese craftsman, the community of whom were well-known on the island as skilled carpenters. The main pieces included a carved mahjong table and a matching drinks cabinet, the latter of which is a sort of James Bond version, with side flaps and bits that lift up and so on. Since my first visit to Erika’s home in London, when I sat at the little table with a prawn sandwich and a cup of tea – the first example of her warm hospitality towards me – I loved her exotic furniture. Many years have passed since then and my mother-in-law has moved to a smaller apartment, and she has passed on some of her furniture. My husband Marcel and I are the lucky recipients of the mahjong table and drinks cabinet, but we were faced with the problem of how to get it over to Ireland. The problem was solved by Marcel’s big brother Ian, who hired a van and brought the furniture over to us, having a week’s holiday in Ireland with us to sweeten the deal. This is a PREMIUM access article. We use a simple to use web wallet that can be filled up using a credit card, PayPal or with XLM using a secure payment system. Once you have paid, you will have ongoing access to the article from the device (tablet, phone, PC) that you used to pay for it. You can access the post by topping up your web wallet with 20 stellar lumen tokens (the price of a stellar lumen is currently [price id=”stellar” fiat=”usd”] ) if you haven’t already done so and then making a micropayment of 2 lumens to continue reading this post   Here’s my tonal sketch of the furniture. The room was very empty indeed before it arrived, but already there have been games of Scrabble and chess on it, and lots of shouts of “get away from the good table!” – my teenagers are very frisky and have very little respect for their mother.

My brother-in-law Ian is a great lover of nature. He sees things in the garden that no one else does. On his first morning, on his early-morning stroll around our garden, he spotted a little wasp backing into a tiny hole that had been drilled into a metal surface, in which it had made its home. “By tomorrow, it will have papered over the opening,” said Ian, “it’s making a nest.” It was very cute, but what was less cute was a daddy long-legs spider staggering around, its body covered in bright orange parasitic mites. Ian isn’t so keen on nature that he objects to catching fish for supper, so we spent the first evening casting off the pier at Trácht, near Kinvara in south Co. Galway. We had no luck with our lines, but we didn’t go home empty-handed: there was a beautiful converted Galway Hooker moored on the quay, where two men sat on deck and ate crab claws and drank wine. They had been on a special mission, spreading the ashes of a close friend on the water all along the coast. I imagine it was a journey they had taken together when their friend was alive, but that’s just a guess. They very kindly offered us some crab claws , which we accepted with delight – and then held out their bucket of freshly-caught mackerel, imploring us to help ourselves. We took six and tottered happily home. “Now, that’s how you catch fish,” said Marcel. Ian was thrilled – it was lovely to experience the Irish spirit of generosity so soon after his arrival. We went home and stuck the fish on the barbecue, filled with walnut shavings at the bottom (there always seems to be carpentry of some kind or another going on in my house), and ate the smoked mackerel alongside the crab claws. Delicious. I thought I’d better take Ian fishing myself, so we gave it a try just after dawn a day or two later. It started to rain as we stood on the river bank. I had my sketching stuff with me and started to draw. Then the heavens opened up and the hiss of rain was all around us on the long grass. I put my sketchbook away, which almost immediately had rain running in a stream down the gutter, I pulled my down coat over my head like a tent, and I was perfectly snug as the rain pattered on my makeshift shelter. Rain on a roof is pretty much my favourite sound in the world and I was as happy as could be. A curlew suddenly broke cover and flew just over my head, making its distinctive cry, and herons stood motionless at the water’s edge, suggesting that there were fish under there somewhere. It stopped raining and I resumed my sketch, and then fish started jumping at Ian’s feet, giving him the boost he needed to keep going. In the end we were out of luck, and the paper of my sketchbook was completely sodden, so we went home, feeling as smug as only those getting home for breakfast at 8am can be.

I managed to get my son to join us a few days later, and although the sun shone this time, the fish continued to elude us. I sat on my little portable stool, half hidden by long summer grass, trying not to think too much of ticks and Lyme’s disease, which is quite common in these parts.

On the whole, we were lucky with the weather, and made the most of the sunshine we did have. One fine day we climbed to the top of Abbey Hill in the Burren. Needless to say, Ian was in his element. The Burren is famous for its amazing flora and unique ecosystem. Among other curiosities, Ian found a lime-green crab spider under a flower, a colony of ants and a grub living in a cow pat, tiny spleenwort ferns in the clints and grykes gaps in the limestone pavement, beautiful and varied orchids and sphagnum moss growing through the branches of a stunted wild rose. At the top the wind was strong but the sun continued to shine. I was given very rare permission to sketch Marcel, and I’m very happy to have this sketch of the two brothers and two of our children all together. Ian had given his extremely expensive camera to our youngest to do as she would with, and she clicked away with abandon, sometimes without even bothering to point it at anything.

On our way down we took a wrong turn and ended up walking though a meadow of wildflowers, growing as high as our knees and higher, of every colour imaginable. Afterwards we went for a pint of Guinness and a bowl of seafood chowder at Linnane’s pub and restaurant in Newquay, where the sun CONTINUED to shine (it just hasn’t been a good summer!) and bought live crab from a row of tanks at the back pf the restaurant. There’s nothing like having a visitor to make you enjoy your own place like a tourist. We’re hoping to persuade Ian to visit next year. [crypto-donation-box]
Categories: Daily Life, Painting in IrelandBy Roisín CuréAugust 10, 2015Leave a comment
Tags: west of Ireland