You are here:
BlogFeature Articles 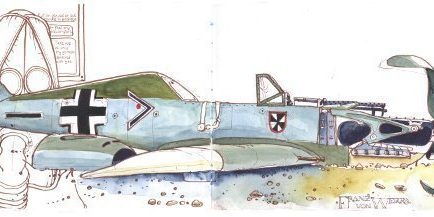 In September I took a party of students to the Battle of Britain Museum in Kent, as part of a four-day workshop I was conducting. When I did my recce of the museum to check it out for my people, I was completely blown away. In fact, there just aren’t words to describe how it made me feel, but I will do my best.

When I was growing up in the Wicklow Mountains back in the Seventies, my parents used to buy us comics every week. I got Bunty or Judy, then moved up to Jackie. I don’t remember much about any of those (apart from an obsession with T-Rex in Jackie, and some pretty dire photo love stories with captions). My brother Malachy got Victor comic. You wouldn’t get away with it nowadays (which is to say that it was deeply racist in tone): the Germans all shouted (yes, in block capitals) “ACHTUNG!” and “SCHNELL!” and “GOT IN HIMMEL!”, which remain pretty much my only words in German, and the Japanese just said “Aiiieeee!”, because there was probably no one in the Victor office who spoke any Japanese. So I got a very British viewpoint of the Second World War; written from the victor’s point of view – literally – without a trace of subtlety, or any humanity ascribed to the other side.

Now I see it differently. Life teaches us that things aren’t always black and white, not even the Nazis. That for even the worst outrages, there were reasons – even if sometimes those reasons were that the bad guys were just bad. When I met my Londoner husband, whose mother is Austrian and was 11 and living in Vienna when the war broke out, I heard how she lost her father in the war, a gentle botanist who worked in the Botanic Gardens and was conscripted. He wrote to say he was making his way home when the war ended, and that was the last anything was heard from him. His wife, my husband’s grandmother, waited for him for the rest of her life, always hoping he would walk through the door.

In the museum, I walked through the vast hangar with my sister-in-law Monique and tried to take it in. Everything was beautiful, everything was moving. My own childhood leapt up back at me in smells, sights and sounds: smells and sights of my own English grandmother’s house, which was frozen in the 1940s (weirdly, since she moved into it in the 60s), and sounds, because the museum pipes wartime music throughout, tinny music and that mad jolly English upbeat vibe all around you. One of the things that really stood out was a newspaper article stuck to a wall. “Mr Hitler And Mr Chamberlain To Have Man-To-Man Talks In Mr Hitler’s Private Rooms” – I immediately thought of Trump and the North Korean dictator – and how that Hitler-Chamberlain man-to-man talk didn’t get anyone anywhere. (“Man-to-man” – sorry, what?)

Three or four days later, I was there again with my students. I was excited for them to see the wonder of the place, with its great spaces littered with downed planes. There was the Red Baron. There were some beautiful Spitfires hanging at a lifelike angle from the ceiling. And there, majestic and still in the middle of a large room, on a bed of sandy soil, was a Messerschmidt.

The theme of the morning’s lesson was how to make colours pop. I had explained how this could be done in a morning debriefing and in a handout, but nothing beats a demo, so I set about drawing and painting this magnificent plane. It was special to sit there with the heavy rain making an unbelievable din on the aluminium roof of the hangar, that marvellous tinny music defiantly singing “Run Adolf, Run Adolf, Run Run Run,” and then I heard two gents behind me talking about the story of the plane. It seems the pilot of the plane, Franz von Werra, was shot down and captured, but just couldn’t be kept under guard. No matter how many times he was captured and imprisoned, he escaped, sometimes against all the odds. His tales of escape were so exciting and improbable that they made a movie about him, called The One That Got Away.
Here’s a timeline of his exploits:

5th Sep 1940; shot down, lands in a field, is captured by an unarmed cook from a nearby unit (“ah, but did he have a wooden spoon?” said my husband.) Put to work digging, he tried to escape, and was faced down by a military policeman, who had a truncheon to von Werra’s pickaxe. Moved to another camp.

7th October: during a walk with other prisoners, he ducks behind a fruit cart while the others created a diversion and slips over a dry-stone wall into a field.

10th October: discovered three days later at about 11pm hiding in a sheep-fodder hut. Upon re-arrest there, he knocks the lamp the pursuers are carrying and flees in the ensuing darkness.

17th December: completes digging an escape tunnel with fellow prisoners. Five prisoners escape with forged papers (done by fellow inmates) under the cover of anti-aircraft fire and the singing of the camp choir. Only von Werra makes it away from the camp. He has brought along his flying suit and masquerades as a Dutch pilot, telling a friendly train driver that he is a downed bomber pilot trying to reach his unit, and asks to be taken to the nearest RAF base. He gets as far as an airfield: a squadron leader is suspicious, and goes to check his story. Meanwhile, von Werra runs to the nearest hangar, tells a mechanic he is cleared for a test flight and hops in a plane. He is sitting in the cockpit, trying to figure out the controls, when the pesky squadron leader returns and spoils the fun. Von Werra is sent back to the prison camp.

21st January: along with some other prisoners von Werra jumps from a window of a prison train from Montreal. The others are recaptured, but no one notices von Werra’s absence until the next day (sillies!)

22nd January: crosses the frozen St Laurence river and turns himself over to the authorities in New York (the US was still neutral).

He is charged with entering the country illegally, but is helped by the German consul, who pay his bail. While the US and Canada are negotiating his extradition, von Werra makes his way to Mexico

18th April: arrives back in Germany via Brazil, Spain and Italy.

I read all this to myself and then sidled up to sister-in-law Monique. “I don’t care what he looks like,” I said, ” I fancy him.” Then I saw a photo and he was extremely cool and dashing, slicked-back hair full of Brylcreem and a ciggie dangling from his lips – neither of which is remotely attractive but this guy could wear his granny’s pyjamas and still be sexy.

After that, von Werra became a hero and an adviser to the German military authorities, giving them tips on how to treat prisoners a bit better (although, one imagines, clearly not very securely). Then he hopped right back in a plane and took off again, creating yet more havoc in the skies. Meanwhile he married a nice Dutch girl.

25th October: his plane suffers complete engine failure and he falls out of the sky, his body never to be found. He was 27.

After reading the short and exciting life of von Werra (did I mention that he had a pet lion in his airbase before the start of the war?) I looked around the museum and read some of the other stories. I realised that all the men who died were full of life and vitality, most of them very young. Despite the excitement of von Werra’s story, most of them are like my husband’s Viennese grandfather – just a colossal waste of life caused by the war, and untold sorrow to the many who were touched by it.

The painting of the plane is available as a print from me: please PM me for details (roisincurepictures (at) gmail.com).