Eat, Draw, Weep: The Emotion of the Gift of Food 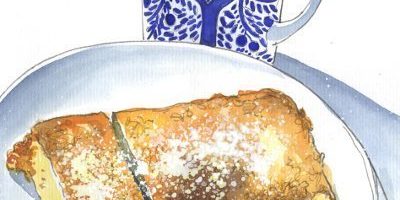 Eat, Draw, Weep: The Emotion of the Gift of Food
‘
By Róisín Curé

[twitter-follow username=”roisincure” scheme=”dark” count=”yes”] If you like this please +1 it!
I’ve always loved to sketch food. An illustration of something good to eat that’s been presented with care is an illustration of an act of generosity. But preparing food, and then presenting it as a gift to a loved one can often be fraught with emotion. To make matters even more complicated, the decision to sketch it afterwards can be seen as a judgment on the food… This is one of my favourite sketches. It’s a good few years old now, but time hasn’t diminished the warm sparkly feeling I get when I look at it.

This is a PREMIUM access article. We use a simple to use web wallet that can be filled up using a credit card, PayPal or with XLM using a secure payment system. Once you have paid, you will have ongoing access to the article from the device (tablet, phone, PC) that you used to pay for it. You can access the post by topping up your web wallet with 20 stellar lumen tokens (the price of a stellar lumen is currently [price id=”stellar” fiat=”usd”] ) if you haven’t already done so and then making a micropayment of 2 lumens to continue reading this post   Remember: NO subscription required, NO monthly fees, NO personal information, just a new secure micropayment mechanism for content you want to see. I drew it sitting at the table, getting progressively more tipsy on a lovely glass of Prosecco, while my husband Marcel prepared a Valentine’s Day meal for me. Cooking a Valentine’s Day meal for me was something that had never happened before. He had cooked for me, once or twice, but from an early stage in our relationship he said that I was such a good cook (I’m not really) that he couldn’t compete, and so didn’t try. In fact the only condition under which Marcel said he’d cook this particular Valentine’s Day meal was if I did not interfere at all. I was amazed that he should think I would want to do such a thing, but found myself needing to button my lip as he got stuck in. Then I copped myself on: I was drawing, with a candle in front of me, and a glass of something cold and white, while a Chinese meal was being prepared for me from start to finish. I shut up. It was Mothers’ Day on 6th March in Ireland. My younger daughter Liv is eleven, and informed me that she would be bringing me breakfast in bed. She presented me with a menu and instructed me to circle what I’d like, which I did, while listening to someone else being busy for a change – the boys of the family were getting ready to go sailing. The day was already shaping up to be a success. After a while Liv brought me a tray with my choices on it: chopped kiwi and pears, a glass of juice made to her own recipe, a nice cup of tea and a boiled egg with wholewheat toast soldiers. Everything was perfect. After the lovely breakfast, the house all quiet by now, I sketched the tray and the remains of the breakfast because I wanted to keep this memory forever.

But Liv’s big brother, my fourteen-year-old son Paddy, was not happy. “She’s showing us up,” he said. “It’s not fair.” “You have plenty of time to redeem yourself,” his dad told him. “You can make dinner if you like, or clean the kitchen afterwards.” “I’ll make a cake,” he said. Trouble was, he is a terrible procrastinator, and by 8pm on Sunday evening he still hadn’t started his homework, as usual. But he was determined to make a cake before he began his homework. He found a recipe from his very own cookbook for teenagers and off he went. Then Marcel told him to substitute coconut oil for olive oil, as he’s fallen in love with it since his newly-discovered health drive. Paddy said he wouldn’t. He’s the sort of person who follows a recipe to the letter. They argued back and forth. It got heated. I got fed up with the cake idea. It got more heated, and I told Marcel to let the lad do what he liked in the kitchen, for right or wrong, if we ever wanted him to learn, but I was too lazy to get up and intervene (the sofa was comfy and it WAS Mothers’ Day). Then the commotion got even louder. Marcel had put coconut oil into the bowl with eggs and sugar when Paddy’s back was turned. The proverbial really hit the fan then – I won’t say who was in tears – and I had to get up from the sofa anyway to sort the situation out. I told Paddy I could use the mixture with the coconut oil for the breakfast muffins in the morning and to start again. So he did. By about 11.30pm the cake was done (the homework took until 1.00am) and we all had a piece of cake and a nice cup of tea in front of American Hustle. The cake was lovely, warm and crumbly with a crunchy cinnamon and sugar topping.

I told my friend Lorraine about all the drama. Her son is great friends with my Paddy, and Mothers’ Day had been emotional in her house, too. “I think Mothers’ Day should be banned,” she said. “It’s too fraught with emotion. Trying to be good, and not fight – it’s just too stressful for the kids.” “Like a mini Christmas Day,” I said. “Just like a mini freaking Christmas Day,” she agreed. “Now you realise you have to sketch the cake, and put it on Facebook, too, like you did with the breakfast.” I said as much to Paddy, thinking he would forbid me from so doing. “Okay!” he said. He seemed enthusiastic. So I did, and lots of people said some wonderful things, which I read out to Paddy. He was thrilled with all the lovely comments. Luckily I love to sketch food so I was happy too. In the end the whole episode was a happy and positive, if somewhat emotional, experience. I’m writing it here because I believe that the small, domestic things that make up our life can be every bit as dramatic – and often very much more dramatic – than those which we encounter outside the home. While raising teenagers can be extremely exhausting and daunting, it can also be very funny, and full of nice surprises. Now for a nice calm sketch with no emotion to finish off this piece: