The Burren in Watercolour: The Chocolate Factory (Part 1) 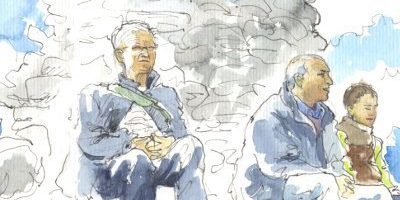 The Burren in Watercolour: The Chocolate Factory (Part 1)
‘
By Róisín Curé

[twitter-follow username=”roisincure” scheme=”dark” count=”yes”] If you like this please +1 it!
Leave the N18 at Kilcolgan and drive towards Kinvara on the N67, about an hour south of Galway City. After the village of Kinvara the landscape begins to change. Gently rounded blue-grey hills rise before you, their flanks a patchwork of green fields. You’re in the Burren National Park, one of those World Heritage places that blows you clean away. It’s a karstic limestone pavement and remains sub-horizontal, meaning the ravages of time never threw the bedrock on its side, as is the case with most of Ireland. That’s why the hills look like a pile of slumped pancakes in the thickening atmosphere. Turn left off the N67 to Abbey Hill, start to climb and you’re a child again, hopping from stone to stone, higher and higher, knowing that on the descent your knees will remind you childhood is a distant memory. The limestone pavement is broken and fractured into clints and grykes, some jagged, some flat, some rounded. Some are loose – an ill-judged step can mean a tumble. Peer down deep, dark cracks and you’ll see delicate ferns, their rocky shelters a private walled garden in miniature. Keep climbing Abbey Hill and you reach the cairn at the top of the hill; it’s got some sort of archaeological significance that I’m afraid I can’t tell you anything about. I made the sketch at the top of this page there. From left to right, that’s my brother-in-law, my husband and my son. Sketching the Burren in watercolour is a wonderful way to capture this magical, special place.

You can access the post by topping up your web wallet with 20 stellar lumen tokens (the price of a stellar lumen is currently [price id=”stellar” fiat=”usd”] ) if you haven’t already done so and then making a micropayment of 2 lumens to continue reading this post   Remember: NO subscription required, NO monthly fees, NO personal information, just a new secure micropayment mechanism for content you want to see. The Easter holidays are a great chance to take the kids for a walk, if you can prise them from their screens. They love Abbey Hill, and have climbed it since they were tiny. I can remember the older two aged 2 and 4 scampering up the rocks ahead of me as I lumbered and panted along behind them, carrying their baby sister in vitro, a month from birth. Now the children are big and needed a bribe before the walk, in the form of giant Snickers bars (no bribe could persuade the eldest to join us). I sketched the view from the side of the hill shortly before the cairn at the top, while the kids roamed around doing their thing near the summit, meaning I could get on with my sketch. When the younger of the two began to get a bit antsy, I sent them looking for fossils, mostly corals. “Corals?” said the younger. “Up here? How can that be?” “Well now,” I said. “That’s a very good question!” I told her that the entire area was a shallow tropical sea once upon a time – about 330 million years ago – but, geology being what it is, there we were, on a rainy limestone pavement in the decidedly less than tropical conditions of Western Ireland. The younger’s curiosity was piqued. I look forward to explaining how the Burren was formed. They brought me fragments of rock and I did my best to identify any fossil content. “Crack open that rock,” I said. “I will stake my reputation as a geologist on there being long lines inside, the coral stems.” (I’m not really a geologist, but I have a master’s degree in geology and was passionate about the subject for nearly a decade.) Imagine how delighted they were when there were no such marks. “Mum’s reputation as a geologist is ruined,” they said happily. I didn’t mind – I sent them to look for more, and I got on with my sketch, telling them that a good scientist is never afraid to admit they’re wrong. Well recovered, no? The Burren is a truly wild place. I’ve seen huge, hairy goats appear for a second on the horizon, swift little stoats scamper out of sight in the blink of an eye and brightly-coloured insects that I can’t identify buzzing over flowers. From late spring until the end of summer the Burren becomes a garden. When it blooms in a month’s time, I will sketch it, and tell you all about it. However, National Parks aren’t a hotbed of industry as a rule. You can’t eat scenery, as they say, which brings me onto the theme of this post, a real success story. My friend Lorraine treated me to lunch recently. She had a surprise up her sleeve: the restaurant at Hazel Mountain, just five minutes from Abbey Hill, further into the Burren. The restaurant is in a tiny, 1950s Irish bungalow, and offers an incredible gluten and dairy free menu. I had no idea this was the case until my second visit, and I have to admit I was surprised. I love all kinds of good stuff – vegan, raw, whatever – but the food in Hazel Mountain restaurant hits exactly the right note between healthy and indulgent. After our gorgeous lunch (I recommend the farmer’s salad and the hazelnut meringue), Lorraine and I weren’t in any particular hurry. “Let’s pop into the chocolate factory,” said Lorraine. Chocolate factory? Huh? Around the back, in three tiny rooms, was an actual chocolate factory. In an ante-room, behind a large window, a lovely young woman in white chef’s gear melted chocolate in vats and poured it into moulds to make truffles and bars. She is a chocolatier, which is different, I’m told, from a chocolate maker, the former being more of a chef, the latter working with the raw material. When we walked into the second room we saw sacks of cocoa beans stacked on the floor outside the Bean to Bar Shed and Tasting Room. A tall, rangy young man – the chocolate maker himself – told us what went on in there.

“We buy beans directly from the growers in Cuba, Costa Rica, Venezuela and Madagsacar,” he said, “and turn them directly into bars. We roast them, crack them and then the winnower removes the husks. Then we melt the cocoa and add sugar – and milk for the milk chocolate. And that’s it. It is a very different, and much simpler, process than the industrially-produced chocolate you are used to eating.” Yeah, I thought, sales patter, looks nice, very interesting, whatever. “Would you like to try a sample?” said the chocolate maker, who turned out to be called Darragh. He passed around a pretty white bowl. I only took it out of politeness – I had had my fill next door. But what I tried was a whole new taste sensation, to coin a phrase. The texture – smooth, yet with interest. The bite – an indescribably satisfying break in the mouth. The taste – smoky, warm, rich, sweet but not too sweet… I didn’t buy chocolate that day, but returned a week later with family visiting from abroad. I bought a bar or two, which is quite something since I am a bit of a tightwad and it’s jolly expensive (about the price of a pint of Guinness or a cheap bottle of wine, neither of which don’t come cheap in Ireland). “I assume you find it hard to eat any other type of chocolate now,” I said to John, who was on the (vintage, gold and heavily-embossed) till that day. “Yeah,” he said, which was a bit vague. I’m sure he fields comments like that all day, every day. There is a steady stream of visitors to the place and the vintage golden tills constantly ring with people buying chocolate. One nibble from that white bowl of chocolate samples and you’re under a spell – one taste and you’re theirs. Awards? They’ve had a few, and they’ve only been open since 2014. One of the bars – the Irish Milk Chocolate – has an old sepia photo of a family on the front. “Why do you have those people on the packet?” I asked. “Is that because they look nice?” “They are my grandparents,” said John. “This was their home. I spent much of my childhood here. The photo is about contributing to a sense of place.” That shut me up – no mean feat. For Easter I wanted to treat myself to the beautiful eggs from Hazel Mountain Chocolate, so I returned to the Burren and bought two, the idea being that the husband and I would snaffle them once the children had had their mass-produced eggs (note: I offered the kids the fancy artisan ones. The youngest said “I would prefer a mass-produced one please”, the middle one wavered, then opted for a Lion Bar one, and the eldest was probably asleep when I was asking). The crunchy stuff around the rim of the egg was puzzling. “Is it gravel?” asked the husband. Turned out to be crushed cocoa bean which I now know tastes amazing. As a couple, Marcel and I are usually quite “you have the last one” “no, YOU have the last one” but it fell to pieces in the face of the fabulousness of this chocolate. There we were, nice cup of coffee etc., but the Hazel Mountain Easter egg was so nice that all at once decorum disappeared. “You have more than me,” said Marcel, “AND you have more rubble” (crushed cocoa bean). “No way,” I said. “You have more!” “But you have the tail, and it’s thicker,” said the husband. “Yes but you have the beak,” I replied. It was all very unseemly and I suspect we came close to weighing each portion. I painted the second egg in its transparent packaging. I like the challenge of painting something that’s “not there”: like water, you must paint the reflections and shadows. It is tricky and you have to concentrate, but it’s fun, too. I used indigo in various dilutions for the bag. I know that dark brown always looks gorgeous with indigo so I was confident that the simple combination of dark chocolate chick, milk chocolate egg and the wrapper plus label would look nice. Of course, everything in Hazel Mountain is über-tasteful so I couldn’t go far wrong.

I’ll be sketching more of the Burren in watercolour. I’d like to draw the chocolatier and the pretty décor in the factory and showroom, if the staff are willing. Keep an eye on my blog and I hope there’ll be more chocolate fabulousness next week. [crypto-donation-box]
Category: Feature ArticlesBy Roisín CuréMarch 29, 20162 Comments
Tags: BurrenchocolateHazel Mountainwatercolour