My Sketching Week: Easter with the Family 16th-22nd April 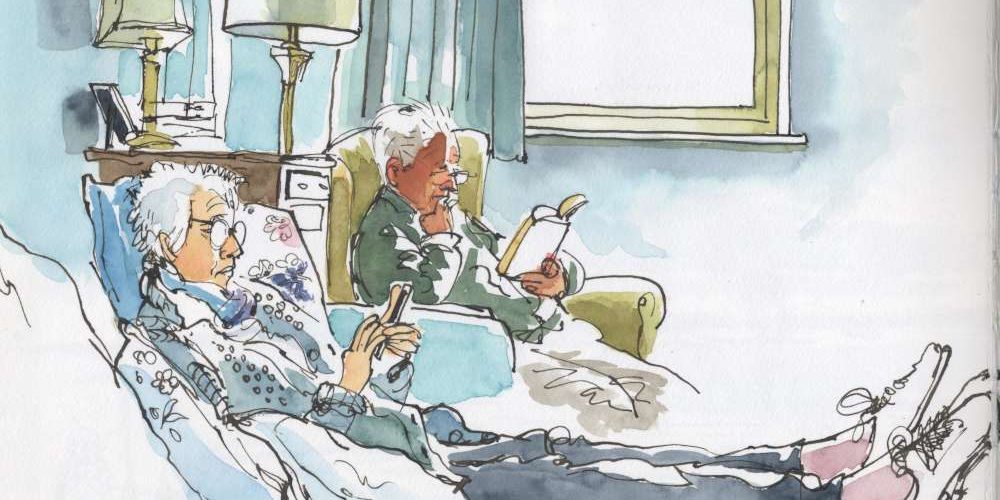 The subject for my sketchalong class is a well that my daughter stumbled upon in a field up the road from us in Kilcolgan. We get it all drawn, but have only got as far as the moss and reflections at the end of class, even though it’s gone over time by nearly half an hour, so I promise an Instagram Live session the following week where they (and anyone else) can finish it. But for now I have to fly, as we are driving across the country to my parents’ house in Bray on the east coast for the Easter weekend. It is so nice to jump into the car with a dog, a daughter and an overnight bag. We have got as far as the petrol station in the local village (3km away) when I realise that I have not bought any Easter eggs for the traditional Easter egg hunt in my mother’s beautiful garden. While Marcel is paying for petrol I make a dash for the shop to see if they have any left, but they are all sold out. I am caught in the act by Marcel (highly-strung). I am berated for insisting that everyone should be ready to hit the road when my class is over, yet am now hunting for Easter eggs for grown adult kids. Liv, our lovely daughter, says that while she may be ready to give up the Easter egg hunt, it won’t be because her father won’t stop at a shop to look for them. Turns out that may well turn out to be the case, and we zoom onto the motorway.

It is blissful to lie around and do nothing with my wonderful parents, but I feel unreasonably conscious of my podcast, normally broadcast on a Sunday, remaining unattended and unrecorded. I see something on Twitter about the work-life balance, and how it should be defined. I immediately feel bad, because I don’t have one, but a few of the answers talk about how the question is moot when your life is your work and your work is your life. That describes me well, and I feel better. Nevertheless, I decide to make a little reel for Instagram of painting these tiny chocolate eggs. I am impatient and the paint runs but I like the effect. The main difficulty I have is in stopping my family eating them before they’re painted. When I’m done, we head out for a walk along Bray beach: Marcel and me, Liv and my mother. The dogs have a ball. My parents have a hairy black terrier called Babette, and she and my dog Reuben get on very well, although Reuben is usually only in Babette’s house for an hour or two when he decides he’d like to go back to Galway, pointing towards the front door with his head in his paws. On the beach a tall dog cocks his leg on Babette, who happens to be standing under him at the time. I can’t stop laughing but the dog’s owner is clearly a bit awkward and tries to tell me his dog missed. That implies it was deliberate but I don’t think the man will feel better if I point this out.

We get back to the house and I check my watch, as I have to pick up our eldest, Honor, at work in the far west of Dublin, thousands of miles away, when she finishes work. To my horror it’s ten minutes to collecting time, and Marcel and I jump into the car and take to the motorway. We are there in 25 minutes and are only fifteen minutes late for her, but it’s a rough part of town. She is extremely gracious. We take a detour through Dun Laoighre to pick up our son Paddy, who is on a sailing course to train the next Irish Olympic team (yes!) – no guarantee that he’ll make the team – and Honor gives a running commentary on the beautiful houses we drive past in Dun Laoighre, and what type of person is likely to live inside. Honor has always had a gift for stream-of-consciousness wit, and I am greatly amused by her comments coming from the back of the car.

We arrive home to my older brother cooking up a storm in the kitchen. He is preparing squid and prawns for deep frying in a delicate beer batter. In the chaos and mess of the kitchen I see a little pink fish lying on a piece of kitchen paper on the kithcen island. It has been excised from the stomach of one of the squid, a sort of culinary Jonah and the Whale, if not one that inspires an appetite (does the other one?). I sketch the little guy, and am inspired to refer to the previous Friday’s unsuccessful fishing expedition with a few pretty words. Someone in the family says I am not affording the fish dignity in death (come ON) but someone else far more appreciative of my massive talent says it’s a lovely way to commemorate the fish. Sadly I cannot remember who said either of these things, and that was before dinner and drinking began. My mother has sent a photo of the fish to my sister in Jamaica, and unaware of this I send her my sketch. She says it’s far nicer than the photo, which, she says, is UGH.

As my brother cooks, three adult children search every square inch of my mother’s beautiful garden for the Easter eggs and chocolates she has hidden in it. They search under narcissi, tulips, grape hyacinth, around trees, up steps and along paths, in a perfect Spring paradise. My mother tells me afterwards that all she could hear for an hour was laughing and shrieking and accusations voiced about the truthfulness or otherwise of Granny’s bunny-sighting. Three big adult children, making their granny and their mummy very happy.

With my family all sitting around the table, I feel just so grateful. Dinner is a stupendous affair. My brother is one of those chefs whose only concern is that the food is properly prepared, and if that means every pot, pan and utensil in the house is used, so be it. We drink a wonderful Albariño white wine my father has brought. After the first course my mother offers water to each of us to cleanse the palate for the red wine that will go with the cheese. My father’s reaction is dramatic – the hovering jug of water offends him deeply, and while shielding his glass from its hideous fate he tells his lovely wife of nearly sixty years, in no uncertain terms, that his palette is perfectly cleansed, thank you.

My father, Marcel and I head out for a walk along the cliff path. My parents are so lucky where they live: they have Bray Seafront on their doorstep if they walk downhill, Bray Head if they walk up and the Cliff Walk, which they can walk along all the way to Greystones, the next town, if they just keep going. Rising to my right is a near-vertical wall of rock, with pretty wild flowers just bursting into bloom, and to my left stretches the blue-green water of the Irish Sea. I look over the barrier wall and see all kinds of seabirds far below me, some of them nesting somewhat precariously right over the train track. I have always been overexcited at the sight of any wildlife (other than rats and mice) and while I am disappointed not to see any of the apparently plentiful seals, I see shags, seagulls, cormorants and lots of other seabirds that I can’t identify living their best life on the jagged rocks of Bray Head. One small bird is black with white flashes in its wings, and red legs. It’s not an oyster catcher. I ask Dad what he thinks it is. “A gannet,” he says. “No, gannets are white,” I say. “It’s a black gannet then,” he says.

Back home, we have an hour before the lovely lunch my mother has prepared: the lamb is in the oven and the salads are all prepared. I tell my parents I will sketch them while we wait, and the drawing falls out of me without a hitch – I’m not usually that lucky, but the funny thing is, the more I practice, the luckier I get.

I take Liv to the gym, more than happy to sketch while she works out. Trouble is, I don’t take into account the time it takes to get to the shore from the gym, or the walk to and from the sketching location – all told they add up to forty-five minutes, leaving me the same amount of time for the sketch, which turns out not to be quite long enough. I end up being really late to collect her – there’s a pattern evolving here – and she is as gracious as our older daughter was a few days earlier.

I head to Mulroog to sketch, a beach much closer to home. The tide is too fast for my pen and paints and I have to give up…

…but the next morning the tides are more or less the same, except going in opposite directions, and I very much enjoy capturing the rocks in shallow water, despite freezing half to death in the sharp wind. I am wearing a fleece zip-up top, windproof jacket, hat and full-length down coat and am still barely able to unlock the car to drive home. I wonder what will happen if I literally can’t open the door, as there’s no one around, but manage it and arrive home to a cup of home-ground, freshly-brewed coffee and a delicious mini Easter egg from a packet which I have bought at the last minute in Lidl, and which is now nearly finished, eaten by the very person who took such exception to my attempt to look for some to buy. That’s marriage for you…as is the lovely cup of coffee made exactly as I like it. I find the second packet of mini eggs (white chocolate filled with a kind of smashed-up chocolate biscuit “milk crème”) and feel they’ll be safer in my studio.

Until next time – happy sketching!