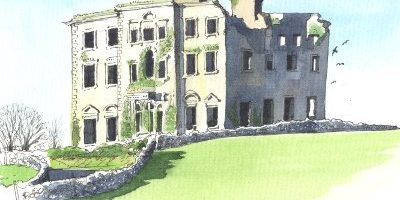 Up until a year or two ago, I brought my kids trick or treating for Hallowe’en along the dark country roads near my home in the deep Kilcolgan countryside. Those times are over now. My youngest is thirteen, my boy is sixteen and my eldest is seventeen (“nearly 18 and an adult, you know” as she likes to remind us). I’m glad those times are over. I have lovely memories of Hallowe’en but it was a lot of work for me. I am an intense person and go too far with most things, usually to my almost immediate regret: I always sewed elaborate costumes for the kids, which would cost a small fortune. Sure, they may have looked like they came out of a photoshoot, but they’d be worn once. No more fancy costumes!

Hallowe’en marks the end of the nice weather in Ireland. My good friend Lorraine abhors the start of winter, and she says that one needs a kind of strategy to get through it. In our case that involves lots of walks with our beloved dogs – and, in mine, sketching.

I used to say to my kids, “If I do something for you that you can do for yourself, I’m not doing you any favours.” It stemmed partly on my being overworked (yes, self-inflicted) and partly from being something I strongly believed. I usually caved in, but I don’t any more, or they won’t be able to fend for themselves in a few years. So when they wanted me to give them ideas for doing something fun for Hallowe’en, I had a ready answer: “Google it.”
They had a lot of fun. This is the product of my daughter Liv’s search. I thought it was great. When I gave permission for those jeans to be used, I wasn’t wearing my glasses, so I didn’t know they were mine. Never mind! I figured there was only so much damage rats, slugs and crows can do in one night.

My husband and I were fervently watching Breaking Bad in a desperate binge to get in Season Three before it was taken off Netfix. My husband is one of those people who doesn’t tolerate fidgeting or sounds while he’s watching something, but I had an overpowering urge to paint the pumpkin that my son Paddy had carved. Until then, I didn’t realise how noisy sketching can be. But try stopping a sketcher when the fever is upon them.

(Watercolour tip: always paint from light to dark. In this case I painted the entire thing, minus the flame, in the lightest yellow. Then I painted it in orange, avoiding the light yellow bits and the flame, then the darker bits, and so on. That way your colours pop and are good and intense.)

Two days later the weather was beautiful. Still, clear and almost warm. My daughter and I took the little dog Reuben for a walk up the road past my house, to the old ruin on the banks of the estuary that runs past the end of my field. If you walk down a bodhreen that leads from the house to the water, you are in a different world: the house was built in 1789 and burnt out in the 1920s. There are still walled gardens, cobbled walkways, turreted walls and a quay that never sees any boats pull in. It is utterly deserted but set in the most gentle, pristine countryside so has a magical feeling about it.
On one of the paths, a storm had brought down a tree and Liv clambered all over it. She was delighted with herself. “Why aren’t you anxious for me, Mum?” she kept calling. “I’m in danger here!” I was only dimly conscious of my duties as a mother and so I told her, with difficulty, that she didn’t have very far to fall, but that she was NOT to rip her new jeans. I couldn’t help thinking of the trees I climbed as a child. They weren’t very high – I’m scared of heights – but they were pointing upwards.

The next day Liv wanted to walk there again. I invited her big brother Paddy because (a) he’s marvellous company and (b) he would have been glued to his screen all day if I had not suggested something outdoorish to do. This is the corollary of accompanying the kids places: they are far less likely than I was at their age to head off on their own. Then again, since I was often up to no good when I went off on my own (smoking, fretting and feeling sorry for myself), maybe I should be glad.

The kids both “climbed” the fallen tree. Paddy started snapping off twigs and chucking them at Liv. The tide was unusually high and the water’s edge was now at the furthermost tips of the tree. I could see things escalating and someone landing in the drink (or ripping their jeans) so I figured it was time for a sketch. Paddy is always very obliging when I ask him to sit for me and he happily took up a place opposite the tree, on the edge of the quay.
You can see how high the tide was – we can often walk along the seaweed at the foot of the quay wall. The wall behind Paddy is one of the compounds belonging to the ruined manor house. It’s full of cows now.

So there you have it. Yes, summer is long gone, and now autumn is too, but I think we’ll survive another winter. It’s another glorious day out, and I’m off to bring the dog for a walk.

Update: This morning Lorraine and I walked our dogs in the woods that back onto her house. After a long while we noticed the occasional leaf falling silently past our heads, so softly and gently that we nearly didn’t notice. We looked up to the canopy where little round beech leaves on little skinny trees were orange, yellow, green and gold against the pale sky. “There’s not much wind,” I said. “They must suddenly have decided they can’t hang on any longer.” With that they started to fall in greater numbers, as if on cue. Lorraine stood motionless, contemplating the silent rain of leaves. They fell through the air all around us, delineating the three-dimensional space in every direction like snowflakes. “A forest bath,” I said to Lorraine. “What?” she said. “The Japanese. They talk about taking a forest bath. I think it means going to the forest and chilling…”