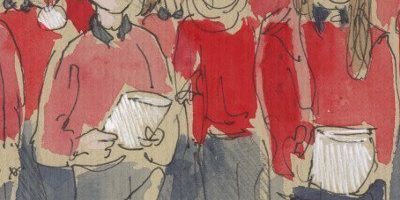 My heart is very low, as someone in our community died recently. He was a man I loved dearly, and it’s very hard to make sense of this dreadful business that dying is. I keep telling myself “People get sick, and they die,” but it sounds meaningless. So I haven’t felt like doing much since then, but life goes on, and there was my daughter and forty or fifty of her schoolmates to listen to yesterday evening as they raised their voices in song and performed Christmas carols in Orantown Shopping Centre in Oranmore, Co. Galway.

They sang Adeste Fideles and put their own interpretation into the Latin lyrics…complete with moose-antler hand gestures, but I wasn’t quick enough to draw those (one syllable’s worth of time won’t do it).

I loved their headgear. At the end of the recital they all threw their hats into the air and I saw a funny Grinchy one with broad red and white stripes, but my daughter tells me it was a floppy one and so it was lost in the sea of hats while I was drawing. But the pointy one under the word MOOSE is rigid – my daughter tells me it has a spring in it – and so it stood up proudly above the others.

Tommy is on the guitar. He is a living legend – my big sister, whose musical taste was so sophisticated that I could only look on in awe when I was a youngster, had a cassette of his that she used to play in the car – and that was twenty-five years ago. When I heard he was the music teacher in my kids’ school I was agog. He’s traditional music royalty and there’s nothing he won’t do for the kids. Fiddle, tin whistle, singing, guitar…the school and all the plays and dramas they do are always alive with music. And the lad on the right is Múinteoir Cormac. (Múinteoir is teacher in Irish). He’s my daughter’s teacher, and was my boy’s teacher last year in his final year of primary school. He loves music more than anything and will get the class to sing without notice. My daughter loves it and often stops her homework to sing the songs she’s learned that day, which can be extremely long, but she has a high, clear voice and I love to hear her. Such a beautiful lack of self-consciousness – long may it last. Apparently he often follows singing with maths, his second favourite thing in the world, so my daughter tells me there are often groans from her classmates when Cormac says they’re going to do some singing. The big kid at the back with the beard is Múinteoir Pádhraig. He’s a great fella for the music too and I believe his guitar is never far away during class.

Don’t miss the kid in the snowman suit at the back on the left. I didn’t do it much justice but that suit was wicked. It had big white googlie eyes and its own top hat.

I thought I’d have a captive audience with the singing but I forgot the thing about kids, which is that they are so fidgety, and there is always something interesting to stare at. So their heads twisted this way and that but on the whole it was fine and I was lucky.

I stood beside my friend Sarah and she told me a story of a Christmas present to a relative that wasn’t appreciated, and I told her one of a dreadful thing that had happened one Christmas Day many years ago. We felt hugely better for the outrage we expressed on each others’ behalfs, and the laughter that followed – she tells a good story, and I suspect I’m no slouch either, if her expression (all wide eyes and laughing mouth) was anything to go by. She kindly held my box of paints when she noticed that dilute watercolour was about to flow all over my coat. The box is too big to use while standing – I need to get a better system.

Looking at this picture makes me feel better.