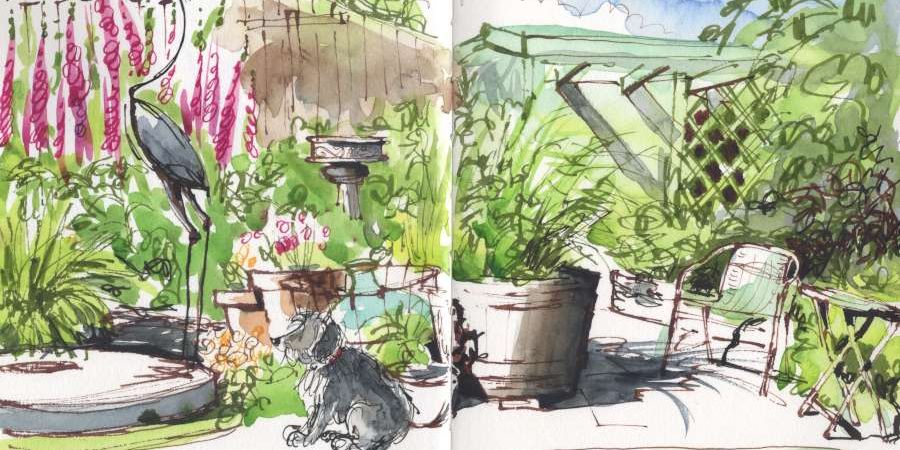 It’s a Bank Holiday in Ireland and there’s a talk on in the Burren Nature Sanctuary. A guy is coming to talk about barn owls. I ask my family if they would like to come along.

“We’re going to meet Erin the barn owl,” I say. My son Paddy (20) immediately agrees, and his dad a little while later. On the morning, his sister Liv (17) has to be dragged out of bed at the very last minute – after the very last minute – which means we leave later than I would have liked. This in turn means we are seated a few rows back from the front, a woman’s head blocks my view and there are some annoying children next to Liv who are old enough to stay quiet and respectful. One keeps taking on and off on of those plastic bracelets that make a loud snap around your wrist. The children, who have only been required to stay quiet for about half an hour, grumble and sigh and ask in loud voices if they can go yet. There is a beautiful owl right in front of them and I think she is sorely under-appreciated by these particular children, although the majority of the children present are good as gold and perfectly respectful. The mother of one of the little horrors has a baby on her lap and has been lumped with two kids who clearly aren’t hers. I hear her whisper “I’ve been up since five o’clock this morning and I am exhausted! Would you BEHAVE!” I feel maximum sympathy for her and make sure to aim my glares at the children themselves. They’re not easily frightened and meet my gaze with insolence. Liv says afterwards there is no way she’s ever having children. I feel a sense of panic that I may not have grandchildren just because I dragged her to this talk, then I remember that the urge to be a mother isn’t really affected by things like that. But maybe she’ll be a little more punctual in future.

The name of the man giving the talk is John Carrig, who set up The Barn Owl Project. John has been involved in wildlife rescue since forever. His job entails rescuing barn owls in dire straits, returning them to the wild when they’re well enough, educating the public as to how best to treat barn owls, and helping landowners to ensure the environment is as barn-owl-friendly as possible: using no rat poison and leaving nesting sites undisturbed. Rat and mouse poison leaves owls and other predators alive (mostly), but woozy and without the wits they need to get through their day in one piece. When they are suffering from secondary poisoning they can’t see or think straight (the poison reduces the oxygen available to them) and they fly into trees, get killed on the road or are unable to hunt, if they don’t just die from the poison. The alternative to keeping rats at bay – there are lots on my land – is to use mechanical traps. That involves emptying the traps. Ugh! But I’ll do it. I have put down my last rodenticide.

Soon, John opens a black cardboard box punched with holes and out comes Erin the barn owl. She was a chick when John took her in, and she lives with him and his family now, and his cat and dog, with whom she wants to play, but who are less keen. Erin is a beauty, with a white face and breast and dappled brown wings. John wears a leather glove to protect his hands and she is tethered to him by a line to stop her flying up into the rafters and beyond safety. I am enchanted with Erin and want to help, and I approach John afterwards to offer my services as a volunteer. Luckily, I have come along at the right time, and he needs help with some illustrations. I feel pleased and grateful that my online teaching business leaves me with enough free time to be able to help, and that it brings enough income not to have to fill that time in other revenue-generating enterprises.

I drive across the country to give a workshop for an Employees’ Day. A big American company, the name of which I am under contract not to mention, is treating its hard-working employees to a day out. The company has been extremely generous to its workers: many have been flown from across the globe to spend a few days in Ireland. They have hired a grand country manor for the day, and have laid on all kinds of fun activities for the entertainment of the workers. Workshops include: how to build a terrarium, how to grow your own vegetables, Clown Skills 101 – and during the day I see a group of beautiful young women wearing crowns of white wildflowers, so presumably a workshop for that is on offer too. I am to teach them how to capture light and shade in watercolour, and I have put together 100 sketching kits, complete with fantastic watercolour paints, the Van Gogh 12+3 set by Royal Talens (the same set I recommend for my Watercolour Sketching for Beginners online course, 4th-8th July, shocking value at €25 for five days). It rains all morning but by the time I drive through the entrance gates in early afternoon, the rain has stopped, and all is golden sunlight, blue sky and greenery in the magnificent setting of an 18th-century mansion.

I have been stationed in a circular amphitheatre-like space in the extensive grounds, surrounded by a tall hedge, with a canopy on top in case the rain returns. As I wait to greet my attendees, three young Mexican fellows arrive. I tell them that I presume more will join us any minute, but fill them in on what we’ll be doing anyway. They look at me rather blankly, so I switch to Spanish, but they still seem nonplussed. I put it down to their long flight, or maybe my bad Mexican accent. Then I look to my right and see hordes of people spilling over the prow of a grassy hill in the distance towards me. They’re slow, but steady.
“They remind me of The Walking Dead, but more colourful,” I remark to one of the wonderful organisers who are there to anticipate my every need. The three young Mexicans leave: it turns out they took a wrong turn, and are looking for Clown Skills 101.

My workshop gets underway. Soon all is peace and quiet in the hot sunshine. Laughter can be heard coming from behind a hedge not too far away, where Clown Skills 101 is being held, presumably with three happy and engaged Mexican guys in the crowd. Once, I mentioned to my husband Marcel that we sketchers often sit in silence when we’re sketching. “You lot are a barrel of laughs, aren’t you?” he said at the time, and every since then I am really self-conscious that we’re no craic. I joke about it now to the attendees. “Bet you wish you were there,” I say, tittering nervously, but they are engrossed in ink, paint and sunlight, and seem very peaceful. As the afternoon wears on, I see sketchers sitting under huge sweeping oak and yew trees, perched before classical statues casting shadows across their stone togas and lolling about on the grass capturing some tranquil bit of hedge or other. One beautiful young woman with black curls, dark skin and freckles is dressed head-to-toe in a dress of silver sequins and sits on the grass, sparkling and flashing in the bright sun.

“Sitting in the middle of the lawn like that, you look so beautiful,” I tell her. “Like an alien, here to share your magnificence.” I really like that girl, all smiles, wholly entering into the spirit of the afternoon as she attempts an impossible tree (I have suggested which subjects will be easier but you can’t force inspiration). In my job, I teach hundreds of people and I end up falling for many of them. Every now and then I am lucky, the stars align and I make a new friend.

I learn that I must remember to tell any novice group the following:

And of course the usual pitfalls tempt them –

All too soon it’s over and I must wish the employees farewell. They’ve been so gracious, so open to my ideas and instruction. I return to my father’s house, not too far away, and I am so tired I collapse after dinner. I apologise for not being of more use but my dear father, who is nearly ninety years old, insists that I just take it easy on the sofa while he clears up (having cooked). He puts on his beloved music over You Tube and I scroll away on my phone in exhaustion, searching unsuccessfully for something to read.

Next morning it’s sunny – for a while – and I sketch the beautiful garden that my parents created together.

Their beloved dog sits still in the sunlight long enough for me to capture her. The words “Frog (big)” refer to the frog I found hopping across the steps down to their tiny pond the week earlier, when I was at the family lunch, and which caused my mother to cry aloud in delight – she is nothing if not dramatic – and which she feared MIA.

I paint the flowers first in watercolour, then try to match the colours of each with scribbly ink. “Scribble” is just one of the many sketching-related words I don’t know how to say in French. I travel to France on Tuesday to teach at Clermont Dessine and I must learn them before I go.

I teach four workshops there:

I can’t even begin to think of the words in French I will be missing…I will report back next week and let you know how I get on!