Optimist Sailing in Kinsale, Co. Cork: My Kids Are Alone On The Ocean! 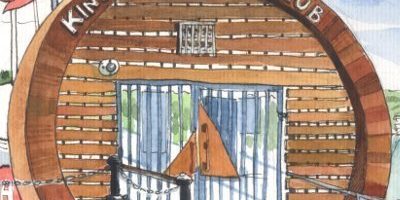 Optimist Sailing in Kinsale, Co. Cork: My Kids Are Alone On The Ocean!
By Róisín Curé

[twitter-follow username=”roisincure” scheme=”dark” count=”yes”] If you like this please +1 it!
It’s strange and somewhat uncomfortable to think about your ten-year-old child alone in the middle of the ocean, especially if you’re a mother inclined to think the worst. So maybe the fact that two of my children sail Optimist dinghies in the rough water off the west coast of Ireland is as good for me as it is for them. I don’t worry about the thirteen-year-old – he is a well-built fella and has been sailing for years, but I did when he started. Now, I dismiss bad thoughts of endless deep, dark, cold water underneath my little darlings (aaaarggh!) and think of the fact that they are being turned into confident and independent young people. You can access the post by topping up your web wallet with 20 stellar lumen tokens (the price of a stellar lumen is currently [price id=”stellar” fiat=”usd”] ) if you haven’t already done so and then making a micropayment of 2 lumens to continue reading this post   Remember: NO subscription required, NO monthly fees, NO personal information, just a new secure micropayment mechanism for content you want to see. I used to send my husband and son off on their own on their sailing trips. Now that the youngest sails too, I join them. The first such trip was in Baltimore, Co. Cork in February, and the weekend just gone was the second, the Munsters Optimist Championships in Kinsale, Co. Cork. I came fully prepared to sketch, knowing that I would have lots of free time. My first sketch was done as the sailors prepared to launch on the first morning.

The scale is a bit wonky, but no matter. A little blonde girl saw what I was doing. She’s a very lively, bubbly little thing. “That’s my Dad! You’ve drawn my Dad!” she kept saying, telling anyone she could. I love that aspect about live sketching – the simple joy you give to whomever has been captured in the sketch. I teased the two men (who are friends of mine) about the fact that they were easy to draw because they don’t move much. As the youngsters launched, I drew them on the slip. Now we’re talking seriously wonky scale, but I’m not proud! Well, I am, but I think it is good for one’s character to try to be less so.

That teeny-weeny Optimist on the right in the foreground? I could say that it was a special one for a very small person but the truth is much less interesting – it’s just wrong. The same goes for the two men walking up the slip in their waders – they needed to be further back to be the right size. Never mind – onwards and upwards. The sun came out and I drew the beautiful Kinsale Sailing Club clubhouse, a very impressive spot altogether. I knew I would have lots of time for the upper part of the sketch, so I spent a while on that. So long, in fact, that my eyes went all blurry. I carefully left the bottom part blank so that I could put the boats in when they returned.

They came back just as I was deciding that urban sketching is too hard on the eyes, leaving me no choice but to get back to my little folding stool and draw like a maniac. The first thing a returning sailor does is take down the sail, so I had to be fast – also, any Optimists that parked (or whatever they do) in the foreground would obscure the clubhouse I’d just drawn. The little blonde girl in the foreground is the one whose daddy I drew earlier. You can see lots of folk enjoying drinks and chats on the balcony. When I’d finished my sketch I joined them for a pint up there which was lovely but far too short-lived – no sooner had I sat down than it was time to gather the kids and go and find something to eat (Kinsale is known for its gastronomy, so we did eat very well). Next day, my daughter told me she and her friend (the little blonde one, again) had found the perfect spot for me to draw, just at the top of the steps.

That’s looking almost exactly in the opposite direction as my previous sketch. The man in the foreground, Brian, very kindly gave my husband a bottle of water to take out on the rib, as he would be out in the bay for many hours, and I had mislaid the one he’d bought somewhere. As a way of saying “thank you” I put him into the sketch. I hope he likes it. Kinsale is a very fancy town – as well as the superlative restaurants (with some pretty superlative prices to match) the town is full of yachting types. You can see some of the yachts moored in Kinsale Yacht Club at the top left. Kinsale town is very beautiful, full of exquisite buildings painting in vivid colours. I had to choose a subject for my last sketch of the weekend, and I did consider drawing one of the adorable colourful houses of the town itself – but even though they are really very beautiful, I was uninspired – not sure why, but it’s hard to fathom these things. I had passed the entrance to the yacht club the evening we arrived and thought it would make a lovely drawing, and chose to spend my last sketching hours drawing it. I sat on the side of the street opposite it and people were very friendly as they passed.

The kids returned and we prepared to leave. They had done very well in their races. My son had been doing better than he had ever done, but the sea was very rough and he capsized, losing his position. But he was sanguine – he nearly always is anyway – and both kids were very happy on the journey home. “There were loads of people going in and out of the gate,” I said to my husband as we drove past the entrance to the Yacht Club on the way home. “I have no idea why – there’s nothing there but boats.” “They are staying on the boats,” he said, “sleeping there and so on.” “Sounds amazing,” I said. Maybe I’ll find out one day: maybe my children will become so enamoured of sailing that by hook or by crook they’ll buy a swanky yacht someday. And I’ll sit on the deck and draw, and I’ll look into the deep, dark water underneath the boat, and it’ll be great.