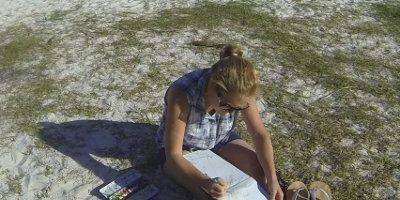 One morning I woke up to a call from my husband’s cousin Alix. “Come out,” she said. “They’re cutting coconuts.” I had always wanted to see a guy climb to the top of the impossibly slim trees that grew outside her house, so I went out to have a look. I asked one of the men if he would mind if I drew him and his colleague while they worked. “Not at all,” he said. Wearing a woolly hat pulled firmly down to his ears, he was obviously feeling the cold, as it was the dead of winter in Mauritius – that’s warm and sunny to you and me.

I looked into the top of the coconut palms. I saw no one, no matter how I peered. “There’s no one there,” I said to the warmly-dressed man. “Yes there is,” he said. Eventually I saw the leaves at the very top start to shake a bit, and down came a coconut. This was repeated a few times, and the man who had lopped them off came down, did something and went up again…very very slowly and carefully, with a rope tied to his feet which he had wrapped around the trunk of the tree, and a machete between his teeth. I began to sketch as fast as I could. The result isn’t any great masterpiece but it is just enough to remind me of those few minutes on the beach: it’s also particularly special, because my husband’s cousin’s house, which had been in the family for seventy years – and which my husband remembers as a lad of seven – is no longer there, having been sold and torn down not too long afterwards.

The pile of coconuts in the van grew steadily larger, and the man in the woollies, who was called Vikram, offered to open a coconut so that we could have a drink. It’s a bit alarming to watch him wield his machete so fast and so close to his hand, but I’m sure he’s been doing this for many years. The bit in the film where I am shaking my head is me expressing my delight in a very stupid way: I think it’s a family thing, the sort of thing you only notice when someone films you…I should add that I am mouthing the word “lovely”!