You are here:
LessonsPainting tips and techniques 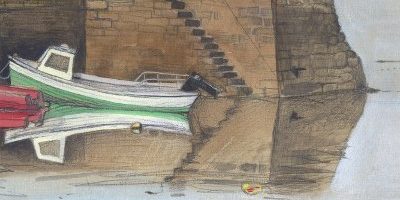 This lesson is aimed at my class of students, who know this quay well and will have a chance to draw it from the very same angle as I’ve chosen here, should they so wish.

In this lesson I aim to illustrate how using the elements in your scene as grid points can help you make an accurate drawing. Of course in order to do this you must be able to “see” well; you must also obey a few rules, such as not making up any lines! Only draw what you see.

After showing you how to get a proportionally accurate drawing, I’m going to finish off by colouring the drawing with one colour only, in order to get you thinking about using different strengths of the same colour to suggest all kinds of subtleties of light. I’ve chosen Payne’s Grey for the simple reason that I love its quiet softness, even when it’s ladelled on (I actually used Mountain Blue in the sky, as it just felt wrong to paint such a beautiful blue sky in Payne’s Grey!)

Here is the final sketch I did of the quay at Killeenaran.

How did I turn a blank page into a drawing?

This is a PREMIUM access article. We use a simple to use web wallet that can be filled up using a credit card, PayPal or with XLM using a secure payment system. Once you have paid, you will have ongoing access to the article from the device (tablet, phone, PC) that you used to pay for it.

Remember: NO subscription required, NO monthly fees, NO personal information, just a new secure micropayment mechanism for content you want to see.

I started with the big stone bollard in front of me, and slightly to my left. Now, I must point out that until about a third of the way through my drawing I used pencil first, and switched to pen after that, but for the purposes of a clear drawing that scanned well I’ve demonstrated the excercise in pen. It’s a Platinum Carbon pen in waterproof ink.

So now I have a few points, and I have to join the dots. Not too difficult, but I try to give my lines a little detail, by following the contours of the paving slabs as accurately as I can, and drawing the cracks between them.

Next, it’s time to put in the line of the grass on the far side of the quay, and the row of bollards receding into the distance. These are tricky! They get smaller as they get further away, so you’ll need to estimate their respective sizes carefully. Also: the line made by the tops of the bollards forms a shallow slope. Get this wrong and you’ll lose the sense of persepective.

Whew! What a busy drawing. I probably could have included an interim drawing but once you’ve got your main points, you have much more freedom to put in the details – just as the further along in a jigsaw you are, the faster it gets. You’ve simply got more points of reference to use as a guide to placing subsequent elements.

I’ve included specks for sand, rocks covered in seaweed to the left of the bollard, mooring lines with seaweed hanging off them, shadows under the row of bollards (and a massive one behind the big one in the foreground), a few fluffy clouds, the hedgerow opposite and lastly a few cobbles in the foreground. It’s important to draw your shadows all at the same time, as they move fast and you’ll lose the effect of a “snapshot” if they’re all pointing in different directions.

To paint, I have decided to stick with just one colour, Payne’s Grey. I paint a thin, even layer onto all the bits that look “dark” to me. I’m not too worried that some bits are very much darker than others – I know I can add a second layer as soon as the first one is dry.

When completely dry, I can pick out the areas that are slightly darker, and add another layer to those bits. For example, the red of the hull of the boat is very much darker in tone than the cabin above it, even though the latter is in shade. So it gets two extra layers (waiting for each layer to dry before another is added). I do the same with the row of stone bollards, and the hedgerow. I do add one more colour, putting Mountain Blue on the sky, because the sky just has to be a nice light blue!
The closest stone bollard gets its own special treatment: I add more layers as I wrap my way around the left-hand side. This is because I noticed that it was darker on the left, being in deeper shade. I also deepened the shadow of the bollard too, for the same reason. One or two cobbles inside the shadow were highlighted with a white gel pen, just because a rogue ray of light must have been catching it somehow.

I dot a bit of extra Payne’s Grey around the seaweed-covered rocks on the left – they were quite dark. If you’re attempting this in the flesh, add as much as you like – as long as you remember to apply the paint in thin layers, letting it dry in between.

The sky is treated a little differently: to add shape to a cloud – or rain, or whatever it is – it’s nice to add wet paint to wet paint. This makes it blend beautifully and looks very realistic! (See the painting on the bottom, as it was done on the spot, ans has a better feel.)

So there you are – drawing accurately, and understanding tonal values. It’s mush more intuitive and less “wordy” in the field – naturally – as you use thoughts rather than words to tell yourself what to do! The only way to learn is to get out there and try. I really hope this has been of some use. Do feel free to comment and ask questions on anything about which you are not clear.