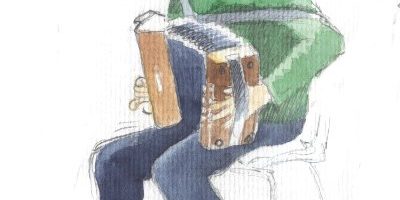 [twitter-follow username=”roisincure” scheme=”dark” count=”yes”] If you like this please +1 it!
People had been talking about Máirtín O’Connor, and how amazing he was, in the weeks leading up to his concert in Ballinderreen Community Centre last Saturday. That was all I knew – I had never heard him play. But when I was asked to come and sketch Máirtín and his friends as they played, I was delighted to accept. This is a PREMIUM access article. We use a simple to use web wallet that can be filled up using a credit card, PayPal or with XLM using a secure payment system. Once you have paid, you will have ongoing access to the article from the device (tablet, phone, PC) that you used to pay for it. You can access the post by topping up your web wallet with 20 stellar lumen tokens (the price of a stellar lumen is currently [price id=”stellar” fiat=”usd”] ) if you haven’t already done so and then making a micropayment of 2 lumens to continue reading this post   Remember: NO subscription required, NO monthly fees, NO personal information, just a new secure micropayment mechanism for content you want to see. The first group to play in this traditional music gig were members of Ceoltoirí an Doirín. What an ensemble. Their passion for their music was clear, and their skill for kids so young was impressive. I know one or two of the parents of the young musicians, so I shouldn’t have been too surprised at their dedication. One of the boys playing has an older brother, who at just eleven years old, his mother told me, felt he couldn’t get through the day without playing his uilleann pipes. That kind of dedication really showed in the kids: they were truly excellent. I decided that the next time I have a party I will hire them to come and play.

Then one of their number, a beautiful young redhead, sang a couple of solos. She was like a young songbird. My favourite was “Red is the Rose…”

When Máirtín O’Connor and Brendan O’Regan began to play, I decided to paint whatever I sketched. As always, I followed my rule of drawing and painting in full the figure I’ve painted, because it will probably have moved before I finish, even though it would be more convenient to paint all the green bits, all the blue bits, etc. So off I set, painting the figure of Brendan, on the far left. But the best laid plans…the two guys’ playing suddenly began to speed up, taking on a frantic pace that reminded me of a kind of trance Delta Blues with West of Ireland written all over it. I knew my sketch was in trouble – I had no choice but to jig, tap and jerk along with the beat, the accuracy of my pencil line taking a backseat to my compulsion to move. This isn’t going to work, I thought, but after that tune ended things calmed down a little and I pulled myself together.

Máirtín and Brendan were joined by Ciara and Sinéad, Máirtín’s two daughters. They were tall and slim, two visions of loveliness. It wasn’t just that they were beautiful – Ireland is full of natural beauties – but they radiated serenity as they took to the stage with their fiddles and sat next to their father. Every now and then, the girls would exchange a comment and a smile; and once they began to play, the language of music was one everyone on stage understood perfectly and the communication between father and daughters as they played was easy and sweet. Then Máirtín introduced another tune. ‘As a young fella,’ he said, ‘I used to love hearing my grandparents play together. There was one tune they particularly loved. “Play “The Blackbird” for me,” one would say to the other. “It’s too hard,” the other would say. “You do it.” Indeed, it can be a tricky tune to play. Now Ciara is going to play it for us, as a slow air…all on her own-io.’ That’s Ciara on the far right. Ciara took up her cello and soon, for the second time that evening, I had to stop sketching. The music rose and fell as her bow moved over the strings, the melody transporting us to a place of bliss. I was just in front of her, a place in the front row having being set aside for me to sketch. I’m sorry I didn’t draw Ciara playing the cello – I guess I have yet to master the art of professional detachment. (The day I lose my passion is the day I stop drawing.) Two days after the concert, I ran into Breandán. I told him how amazing I thought the younger musicians were. ‘They’re still on a high,’ he said. ‘I’d say a lot of them didn’t sleep that night.’ What a gift those kids have been given, and now they’re giving it back to us. The future of our glorious musical tradition is in safe – and talented – hands. (c) Róisín Curé 2014 all rights reserved
[crypto-donation-box]
Category: Feature ArticlesBy Roisín CuréOctober 7, 2014Leave a comment
Tags: music