Where Lobsters (Might) Do Yoga: Killeenaran Pier, Co. Galway 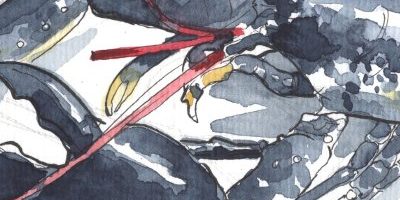 One of my aims in contributing to this blog is to introduce the reader to the area where I live, in south Co. Galway, on Ireland’s west coast. I especially like Killeenaran Quay, about two miles from my house. In summer, it’s the focus of village life, and at high tide it’s always thronged with people swimming and chatting. Throw in a bit of sunshine, and you can barely get to the water’s edge.

When I first came to this area seventeen years ago, it was January, and its charms were less than visible, blown into next week by the howling gales and freezing horizontal rain. During the time we built our house, I frequently reflected on the fact that no one had built there before: it was utterly wild and very inhospitable, and it would have taken a hardy soul to build there.

But we stuck with it, and as the years unfolded, the unique character of this place revealed itself to me, and now I cannot believe the good fortune I have to call it my home. Ask me again in November, and I’ll think I never said that.

This morning I called down to a client’s house to discuss a job, a wonderfully gregarious and open woman named Charlene.

While we were chatting, her neighbour Cyril called in, holding a beautiful dark blue (live) lobster. He had lent a neighbour his boat, and the lobster was a thank-you gift.

“Look,” said Cyril, “if I put it into this position, it will go to sleep.”
He put the lobster on its head, with its huge pincers resting on the ground, pointing backwards, and with its tail slightly curled, above its head:

“They sleep like this, you know,” he said, but Cyril is a very funny man and you can’t take anything he says without careful consideration.
“There’s no way that’s true,” I said. “Lobsters don’t sleep like that, like they’re doing yoga.”
“How do you know?” said Cyril. “Have you seen a lobster asleep in the sea?”
There was no answer for that, so I asked Cyril if he’d leave the lobster with me long enough to do a quick sketch.

Off he went, and I sketched the lobster, which didn’t so much as twitch for about twenty minutes, so it must have been asleep; and when Charlene’s foot caught it by accident afterwards, it was very cross and tried to nab her with its pincer.

Cyril said it was humane to send the lobster to sleep before he killed it, which he would do by putting it in the freezer for an hour to send it into a deep sleep, after which he would put a knife into its head, where its brain is (so I’m told).

If you walk from Charlene’s house for a couple of minutes, you come to Brandy Bay, where the road splits into two.

Take the road to the right of the bay and you come to the pier at Killeenaran, near which the lobster was caught. Although I draw the pier a lot, I don’t draw it as much as I’d like – I’ll explain why in a minute.

This is the pier at mid-tide:

If you stand at the top of the steps and look across the water, you can see a lovely little cottage with doors and windows picked out in blue and yellow. There’s a raft in the water in front of it, which, despite appearances, is very stable. Brandy Bay is just behind it, so the cottage has water in front and behind.

Here’s some more sketches of the pier, at low tide –

and later the same day, when the tide had filled in a bit, with villagers down for a splash:

All this week, it’s been really sunny weather, and when it’s hot and sunny in Ireland in June, everyone makes for the sea. The tide has been high in the evening all week, getting later each day. On Monday, Tuesday and Wednesday, my kids and I joined in the fun at the pier. The eldest was kayaking just next to the white cottage, and the tide wasn’t quite high yet, so I took a few minutes to sketch:

A swimmer is sitting on the raft in the water, which you can see in the earlier sketch of the white cottage. As you can see, I didn’t spend too much time on this sketch, and this brings me to the reason why I don’t draw down at the pier as much as I might like. It’s because you can’t resist joining in the fun. Shortly after I sketched this of my son and daughter, the tide was high enough to swim, we were joined by about sixty kids and adults, and we all leaped into the drink. I was a bit of a chicken, and kept my wetsuit on, unlike the rest of the hardy souls. Soon the water appeared to be boiling with a writhing mass of bodies, a bit like monster eels in a horror movie.

Saturday is the longest day of the year. I’ve just suggested to my son, who is twelve, that we head down around midnight, when it will barely be dark, and the tide will still be quite high.

I shall report back!

I use various types of watercolour paper, but one I come back to a lot is by Langton, available here from Dick Blick :-