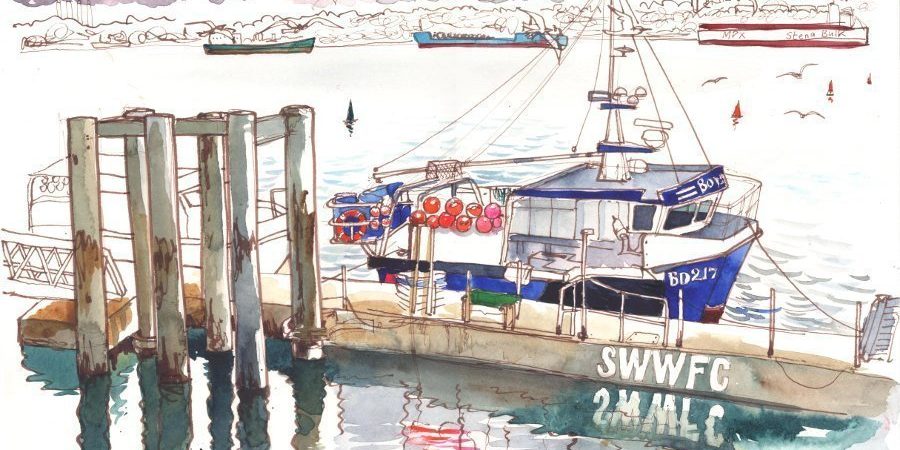 As a sketching artist, I’ve had some amazing jobs. One of the best assignments I’ve had was sketching for Bluefish, when I travelled all around the Irish and Welsh coasts with the fabulous Sharon Sugrue, who co-ordinated the project. We were hired by the Marine Institute in south Co. Galway. The Bluefish project is an EU initiative designed to increase knowledge and understanding on coastal communities in Ireland and Wales.

I’ve written elsewhere about the project ( https://roisincure.com/wp/the-bluefish-project-sketching-the-irish-and-welsh-coasts-part-1/ ), but here’s a quick recap. The idea was to combine art and science to bring home to people the reality of what it means to make a living on the coast, especially in the face of climate change. Sharon interviewed the people we met and their words were included as quotes, displayed with the artwork. You can see so many scientific headlines and the mind can boggle a bit, but on-location sketches, together with first-hand quotes, would make a much bigger impact – that was the thinking anyway.

The project was the brainchild of Paul Connolly of the Marine Institute. It’s not often that someone has a vision to marry two disciplines, and the wherewithal to execute it.

(I’ve used some of my favourite sketches to illustrate this article – they’ll give you a better idea than words of what it was all about.)

The collection of sketches were exhibited in the foyer of the Marine Institute, attached to velcro display boards. Seen in their entirety they looked rather magnificent (if I say so myself).

Some of the people we interviewed were concerned about climate change. Some were baffled; some said it’s all made up; some couldn’t have cared less. Many of the workers had noticed adverse effects of climate change on their businesses already. A surfing instructor said the warm sunny weather was bad for surf and bad for wearing wetsuits. A mussel fisherman said he had seen increased acidification in the water which was having a negative effect on his stock. A worker on a ferry said earlier storms than usual had meant cancellations at times of the year when that normally doesn’t happen, and that they had run out of drinking water.

A crab fisherman said he’d never thought about it.

A young man working in his parents’ marine supply shop said he didn’t think it would affect him in his lifetime.

Sharon was a great choice to lead the project, as she grew up on the shore in Co. Kerry, where her father and brother run an oyster and mussel fishing business. Quite apart from that, she is a marine scientist with lots of sea-time experience, and just knows a lot of things about the ocean and all that sail on her. In that way I came away from the project much the wiser about all things fishing. I didn’t know, for example, that you can get an app that provides a map in real time of every single ship sailing anywhere in the world.

The trip was wonderful, and deeply satisfying for me as an artist: I got to do what I do best – drawing and painting what’s in front of me.

I got to know parts of the Irish and Welsh coasts that I would not have visited otherwise. I also saw at first hand what climate change is doing, in a real way. It is a worry, but I try not to dwell on it, like most of us, and try to emphasise the positive.

A Couple With A Conscience

But back to the Royal Visit.

“Are you excited?” asked the receptionist at the front desk of the Marine Institute.

“Are you nervous?” she asked. I thought about it. I said that I was not in any way nervous. I think I was supposed to be.

In due course the royal party arrived with a great cohort of security men with coiled wires coming out of their ears and heavily-medalled generals clanking through the main entrance in pristine uniforms. King Carl Gustaf and Queen Silvia were gracious, meeting our eyes with a warm gaze and a smile as they shook our hands.

The King and Queen were introduced to some of the work carried out by the Marine Institute, and Paul Connolly spoke with eloquence. Then the royal couple did their tour of our display, and Sharon told them about our work on Bluefish. King Carl Gustaf looked closely at the paintings, and I told him some of the stories behind the sketches.

King Carl Gustaf was intrigued. Then he looked a bit confused.

“But what…” he started, looking perturbed, “what is being done with all this art to publicise this project?” He gestured to the display. “Where else is this artwork being shown?” He didn’t look happy.

Sharon told him that the exhibition is travelling to SeaFest in Co. Cork in June. He still wasn’t fully happy, so I told him that 40,000 postcards have been printed for distribution with the entire collection of artwork on them, along with the quotes we gathered from the stakeholders, on the reverse. He seemed reassured by that.

Then we spoke with Queen Silvia, who was also studying the art. I told her that I admire Greta Thunberg very much, and that it has taken a child to wake people up to what is going to happen to the next generation.

“I have four children, my Queen,” said her aide-de-camp. “I am worried for them.”

I was proud to be part of it.