The party refuses to end in the City of the Tribes

You are here:
-TravelPainting in Ireland 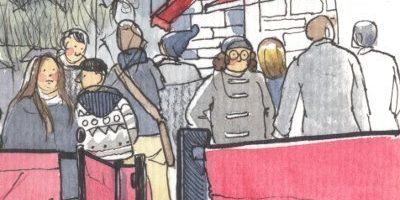 Grafton Street is one of the posher shopping streets in Dublin City. It’s nice any time of year, but every December in the run-up to Christmas the atmosphere on the street changes. Perhaps it’s an imaginary hangover from childhood, but in my memory, the street starts to sparkle around Christmas and there’s a buzz in the air.

I felt the same atmosphere back in 1991 when I hopped off a bus on my arrival in Galway City, the City of the Tribes for the first time, but it was a Tuesday afternoon in October. There was no festival or holiday to explain the atmosphere – and I quickly learned that’s just the way it is in Galway. I was there to start a university degree, and I never left. All these years later, that atmosphere is never very far away. True, there are days when no amount of the legendary Galway vibe can overcome the grey, cold and drizzle. But I haven’t experienced such a day in Galway for a long time – I must be due one. In January, no doubt.

Yesterday I had to hang around in town for a few hours while my daughter went to the cinema with a friend, so that I could pick her up later and not have to make the trip twice. I took my opportunity to find a nice spot to draw. Far from the town starting to quieten down – it is November, after all – it was so lively that I felt just the smallest bit left out (although I don’t know of many activities other than sketching where you can sit on your own very happily for hours). The people who passed me were typical Galwegians: a guy in a Nordic pattern knit jumper, lots of fellas in beanies with man-bags worn crossways over their shoulders, Brits over on drinking weekends, pretty girls talking animatedly in Spanish, French and Italian and older, somewhat dishevelled men with dogs who knew which pub to turn into without indication from their masters.

I drew this from the outside bit of Fat Freddy’s, a restaurant that has been in Galway since I first arrived 23 years ago, looking down towards the Claddagh. The management had kindly draped blankets in cherry pink and red tartan on the backs of chairs, so that if you did feel like soaking up the atmosphere outside, you could do it in comfort. But I was dressed in my winter sketching outfit, and had no need of such pampering.
You can see McDonagh’s fish restaurant on the right – that’s been there for decades, and the fish and chips they do in the take away part are always super-fresh. Over the Claddagh I could see a classic late-afternoon winter sky, a watery blue with purplish-blue clouds stealing across it.
The stonework building to the right of the sky is medieval and beautifully restored but I don’t know what it is…I will find out.

Two days earlier I had found myself in similar circumstances, with an hour to kill before a meeting. I wanted to draw outdoors, but the rain was pelting down so hard that all the PVC tablecloths under the awnings had pools of water on them. I floundered about pathetically for a bit on the near-deserted street, wondering what to draw, then I headed into Neachtain’s pub on the corner of Quay Street and Cross Street, which is a few doors up from McDonagh’s fish restaurant, on the same side of the street.
Many moons ago, back in my university days in the early nineties, I was a regular in Neachtain’s. What a toxic way to enjoy ourselves: as if the over-indulgence in Guinness wasn’t enough, it was in the days before the smoking ban, and you could barely see across the room for the thick grey haze, to which I willingly contributed. But you were guaranteed the craic in Neachtain’s on such a night – you probably still are, but I wouldn’t know, as I lead a different sort of life now. I don’t even know how much a pint of Guinness costs, and as for cigarettes – I have the classic reformed-smoker puritanical zeal. But last Thursday afternoon, there were no revellers in Neachtain’s, just a few well-behaved types having lunch or a quiet drink. The crackling fire in one of the many alcoves and snugs made it most inviting. I ignored the memories that threatened to creep in and distract me, settled down at a tiny table in a corner and took out my drawing stuff.

I was unnoticed, other than by the beautiful waitress who brought my soup, and I couldn’t believe that I got to draw a person from this close remove without interruption. If he did notice me, he let it go. Maybe he was too distracted by memories.

I’m going to try and capture Galway’s atmosphere this winter – from both indoors and out. I’ll stop when the magical vibe fades and the town goes to sleep for the winter. But I’m kind of thinking it could be a marathon…