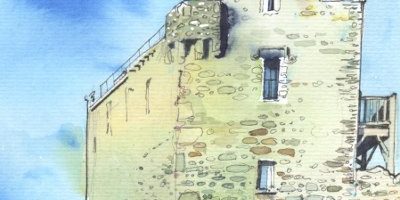 [twitter-follow username=”roisincure” scheme=”dark” count=”yes”] If you like this please +1 it!
It’s February and that means the annual Optimist Sailing Week in Baltimore, Co. Cork, when kids from all over Ireland pack their boats, their rugby balls and their hover boards and descend on this small fishing village on the southernmost tip of Ireland. Their mums and dads don their striped Breton tops, their Helly Hansen and Musto gear, regardless of how close they get to the actual water, and we all have a jolly time in this rocky little spot which sticks out into the Atlantic Ocean. It was time to start sketching Optimists again, but this year we had just one sailor in the family, her brother having moved on to a bigger craft last year. She was dreading the week, and it wasn’t too surprising – the prospect of sailing in the open Atlantic in February with nothing but a tiny dinghy between her and the cold, greeny-blue water, a dinghy of which she and she alone was captain and crew, wasn’t one that inspired enthusiasm. (I soon discovered that many other children felt the same way.) Our eleven-year-old sailor made it perfectly clear that this week would be her last to sail, forever…unless we got her a dog, something which won’t be happening. You can access the post by topping up your web wallet with 20 stellar lumen tokens (the price of a stellar lumen is currently [price id=”stellar” fiat=”usd”] ) if you haven’t already done so and then making a micropayment of 2 lumens to continue reading this post   Remember: NO subscription required, NO monthly fees, NO personal information, just a new secure micropayment mechanism for content you want to see. The week started on Sunday with the children’s first day out on the bay nestled between Baltimore and Sherkin Island, which is the ideal place to get youngsters sailing, as it’s sheltered. After weeks and weeks of storms the weather gods decided to give us a break, and Sunday was lovely. But the gods surpassed themselves on Monday and we had one of those rare days when the sun shone with real warmth, not a cloud in the sky. My husband and I and our non-Optimist-sailing son went to Lough Ine, not far from Baltimore, a salt water lake connected to the sea by the narrowest of gullies. The lake was the most incredible colour – not quite jade, not quite turquoise, but something akin to both, and so still that staring into the water you couldn’t say where the air ended and the lake began. A local man with about three teeth stood smiling at the water’s edge. “Any eggs?” he said. I bought six beautiful duck eggs from him: I had a birthday cake to make, as our older daughter was turning sixteen the following day, and I’d heard duck eggs were great for making a Victoria sponge. (In the event, my sponge wasn’t great, despite the wonderful eggs.) This is me with my friend Lorraine sitting in the sunshine at Lough Ine a couple of days later. I’m on the left. It wasn’t as incredible a day by any means as the one we’d had on Monday but it was still lovely.

When we returned I drew Baltimore Castle, which dates back to the 13th century. Baltimore Castle towers over the harbour and is a majestic and romantic presence. It was built in 1215 by Norman settlers. Then clans rose up against them and the castle was inhabited by the O’Driscoll family for four hundred years. The castle fell into ruin in the seventeenth century; restoration was carried out from the late 902 until 2005, when it was once again opened to the public…in the summer months. One day I’ll be in Baltimore in the summer, and I’ll sketch it from the inside.

Lads sat outside Bushes Bar in the sunshine and chatted as they drank. You can see some of them in the sketch. The rich tan of the fellow with the cigarette wasn’t generated that day in Baltimore, alas: the sun, although the best of the year so far, was deceptive and I got very cold. Dogs were tied up outside the pub, barking for their pint-drinking masters inside. A dog in the care of a lady at a nearby table beat them all, with an ear-splitting, high-pitched bark. “What are you trying to tell us?” said the lady. To hurry up and finish your drink. Clearly. It was so cold that the paint simply wouldn’t dry on the page and my colours kept bleeding into each other. Ah well – good for a control freak. It rained without a single moment’s respite all day Tuesday, but by Wednesday all was sunshine again. My son and I climbed to the Beacon, a tall concrete structure built to mark the entrance to the bay, like a lighthouse without any light or personnel. It’s very much an icon of Baltimore.

There is a sheer drop just to the right of the sketch, the grass giving way to thin air. You wouldn’t want to be scared of heights when you peer over, which I am, so I only took a quick glance. The jagged cliffs are ominous and the sea is treacherous so one must take care. I started to sketch a tourist in a yellow anorak at the base of the Beacon but he nipped around the other side. You can see his ghostly outline at the base, giving you an idea of the scale of the thing. Thursday morning I drew the view from Bushes Bar, where it was warm and cosy. The week is really social and many friends drifted in and out, drinking coffee and eating scones and generally shooting the breeze. I contributed in no small measure to the chatter, which is why a quick sketch took at least two hours.

I enjoyed sketching Optimists in the bay – they made a lovely sight in the morning sun. Dogs greeted each other, both on a lead held by an owner, but I wasn’t quick enough to get them in too, so the dogs look as free as the birds. The barrel with the red hoops and the red stools are the very ones that the tanned man and his friend in the top sketch were sitting at. That’s Sherkin Island in the distance, and gives you an idea of the bay, and how perfect it is for the children. The kids were shepherded around in groups of about eight, each under the care of an instructor. Our daughter’s instructor was fantastic, and although our girl was beaming from ear to ear every time we saw her, she was still insisting that Friday was the last day she would ever sail, unless she got a dog. With no such dog on the horizon, I though I’d better get to sketching Optimists on the slip, where she would be launching her boat. That’s her in the pink hat with the orange bobble. Only trouble was, I must have been concentrating hard, as I missed her launching, even though I had been watching out for her from the very first boat. So I put her in after she’d returned to shore, figuring she’d never notice. She did. “That’s not how it was. The sea wasn’t that nice-looking,” she said. “And I wasn’t launched by that guy in the yellow sleeves, I was launched by Conor, on the other side of the slip. Definitely not that guy.”

The other two lads are from our club, Galway Bay Sailing Club, too – I could have sketched any one of the 135-odd sailors, so I thought I’d draw our own. We travel all over the country with the other parents from the club, so they’ve become our good friends. My husband Marcel was on slip duty on Thursday, helping the kids in and out of the water, so I drew him too. That’s him on the right in the blue trousers. A few sailing children in drysuits watched me sketch. “Did you sketch here last year?” said one young girl. “And did you write something on some website about it?” “That’s me,” I said. “My mum read that,” she said, “and that’s why she decided to come down here this year.” I don’t know whether that’s true or not, but her comment will stay in my heart forever. Friday was a good day for a race, apparently – a fair bit of wind, which would provide the poor young sailors with a “challenge”. Rather them than me, but that’s the beauty of Sailing Week and Optimist dinghies in general – get the kids into it young enough and it is incredible what they can and do achieve. They spend five hours or more out there, with their lunch in little waterproof containers. I think they are most impressive, but the driving force in our family when it comes to sailing is my husband and not me, and I’m so grateful for what he’s done, even if our youngest felt otherwise in the days leading up to the race on Friday. Prize giving took place later that night. I choked up when a young girl was awarded a prize for going back and helping another sailor who had fallen into the water, despite being in the middle of a race. It’s by no means the first time I’ve heard that kind of act of kindness (the sailing kids are wonderful little creatures) so I should have remained unmoved but it’s not possible. Our daughter, who had just sailed her last ever race, was awarded the prize in her group for Best Improver. Later that evening I received some sad news about an unwell and far-away relative. A gloom descended on me and my husband and I repaired to Bushes for a pint, as our children were with friends. I wondered if I could lose myself in a sketch if I gave it a go, choosing the very busy wall opposite me. Sure enough, i was soon lost in lines and shapes and was only dimly aware of a very tiny girl watching me sketch. After a while I got up to leave, but a hand on my arm stopped me. “Thank you,” said a man. “For what?” I asked. “My daughter very much enjoyed watching you sketch,” he said. “That’s her granddad in the photo on the piano, and he was sitting there in the corner, just over there. She said you were drawing everything – she loved it all.” Well. All I did was make a sketch. So lovely to make a little girl happy while I was about it. Out we went into the still night air, rugby balls flying everywhere, hover boards weaving through Baltimore’s single (empty) street. Not for the first time I wished I could stay indefinitely, but we were leaving in the morning.

Back in Galway on Saturday evening, my husband was trying to tell our younger daughter where she’d gone wrong in her race (although she did very well, better than she’d done all week). I wasn’t really listening but I heard her say something about the Optimist races she’d be attending during the summer. That was a surprise, coming from someone who was so determined to quit just a day earlier. There’s still an outside chance I’ll be sketching Optimists again next year, with a still-enthusiastic sailor. But I wonder if we’ll have a dog with us? [crypto-donation-box]
Categories: Feature Articles, Painting in IrelandBy Roisín CuréFebruary 22, 20162 Comments
Tags: Baltimoreboat sketchesdinghy sailing