Painting in Jamaica: A Tropical Odyssey with Fiona Godfrey

You are here:
-TravelFeature Articles 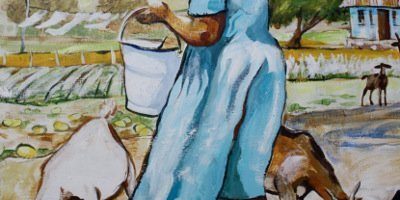 Painting in Jamaica: A Tropical Odyssey with Fiona Godfrey
By Róisín Curé
[twitter-follow username=”roisincure” scheme=”dark” count=”yes”] If you like this please +1 it!

When we think of painting in the tropics, we imagine palm trees, perfect sandy beaches and turquoise sea. Jamaica offers all of this and much more, but the practicalities of living and painting in Jamaica are not always what you might expect. On the one hand, there is inspiration at every pass: the lush vegetation, the magnificently beautiful people and their colourful outdoor life, the stunning land and seascapes. On the other hand, life on a developing tropical island can present challenges to a painter. The suffocating heat, for one thing – it’s often too uncomfortable to paint outdoors or in. For another, it’s not really possible to set up an easel in the street without attracting attention of the wrong sort – and the struggling economy makes art a long way down the priority list for the powers that be. So how do you make a living as an artist in Jamaica, whilst still being true to your ideals? This is a PREMIUM article. You can access the post by topping up your web wallet with 20 stellar lumen tokens (the price of a stellar lumen is currently [price id=”stellar” fiat=”usd”] ) if you haven’t already done so and then making a micropayment of 2 lumens to continue reading this post   Remember: NO subscription required, NO monthly fees, NO personal information, just a new secure micropayment mechanism for content you want to see. Fiona Godfrey is regarded as one of Jamaica’s foremost artists. Originally from Ireland, she’s lived and worked as an artist in Jamaica for 25 years. A few years ago she won an international competition to produce a super-sized mural for the Donald Sangster International Airport in Montego Bay, which welcomes thousands of visitors to the island every year. The scale of the project is quite staggering, and the individual panels of the mural come to over 72′ (22m) when hung. The idea was to welcome visitors to Jamaica with a portrayal of the distinct life and culture of Jamaica – to give them a taste of the island. Here’s what visitors to the airport see:

and the mural in its entirety, shown split in two…

Carrying out the commission was far from easy. “The job came with lots of difficulties,” says Fiona. “To begin with, I had no experience of working at such a large scale – but then I rather imagine very few people have painted a 72′ mural! The first problem I had was trying to find a space large enough to accommodate the panels. I eventually acquired a space in downtown Kingston, which is very hot, and the warehouse had a zinc roof, which meant it was like a furnace inside – it was so hot that I could only work for a few hours at a time before heat exhaustion set in. I had huge fans on all the time which blew dust into the paintwork and shortened drying time, which I didn’t want. That and other factors resulted in a very textured surface which I came to love after a while, despite being unplanned. The next problem arose from the fact that I work in a very loose way, allowing the image to develop as I go. Because the warehouse space was narrow, I couldn’t stand back and see the panels at the distance at which they would be hung, so it was hard to assess the way forward. If I was doing it again, I would make a scale drawing and work from that. The drawings were made from sketches and photos I took as I travelled all over the island of Jamaica, and the idea is that they represent the life and culture of our beautiful island.” Here’s a peek of the work in progress in the Kingston warehouse –

It’s ironic that such beautiful images of warm sunshine and a gentle pace of life were produced in such a trying environment, but other jobs have proven more pleasant. This is a mosaic that Fiona designed and produced for a garden in Kingston. It covered a wall which had a fountain as its centrepiece, and was shaded by a glorious mango tree.

The mosaic expresses the light, heat and colour of Jamaica, a recurring theme in Fiona’s work. “I’m inspired by the flowers, land- and seascapes of Jamaica,” she told me. A recent exhibition was a big success, and contained some evocative, powerful oils. Here are some of Fiona’s oils, inspired by the magnificent flora of the island…

I find the combination of hot colours and strong shapes very appealing – the images are arresting and soothing at once. Fiona told me what brought her to Jamaica all those years ago. “I initially came to Jamaica to teach literacy to abandoned and abused boys,” she told me. “But I quickly realised that something much more direct was required. I began to use art as a means to educate them – it was art therapy, in fact, but I didn’t know it as such at the time. From that I began to teach kids on a more extensive basis, and the educational aspect of my artistic career began to grow. Now I teach about 30 adults per week, and they’ve been coming to me for years. I derive great inspiration through interacting with my students, and during preparation of the classes.” I wondered what effect the economy of a small, developing nation has had on Fiona’s art. “You can’t live here and not be affected by the plight of many of its inhabitants,” she told me. “My students and I have contributed to various charities over the years. The one we are currently involved with is an excellent organisation called Food for the Poor: we’ve produced a calendar to raise funds for it for the last two years. It’s sold out every year, and our work for the charity is growing.” I put it to Fiona that it must be wonderfully inspiring to see her students flourish under her guidance, but I wondered what sort of challenges she faces in her own work. “Unfortunately it’s hard to get out and paint in the open in Jamaica. I do some plein air work but most of my work is in the studio as it’s too hot outside and also unsafe in certain places. But my students are a wonderful community, and we have lots of fun – and there’s always a lot of laughter in our classes. I love what I do, and I love sharing my passion with others.” The fact that Fiona is from Ireland, where I live and work, may have given you a hint that she and I know each other personally. Fiona is my sister. She and I are part of an unbroken line of painters which dates back to the 19th century or earlier, via Madeira, England, Ireland and the tropical islands of Mauritius and Jamaica. Our own children are budding artists too, and will one day form the fifth generation of painters in the family. To finish, a watercolour dedicated to peace in a turbulent world…

Long may her life in Jamaica continue to bear fruit in beautiful canvases and a growing band of passionate artists.