Next Year in Paradise? A Sandy Beach in Mauritius

You are here:
-TravelPainting in Mauritius 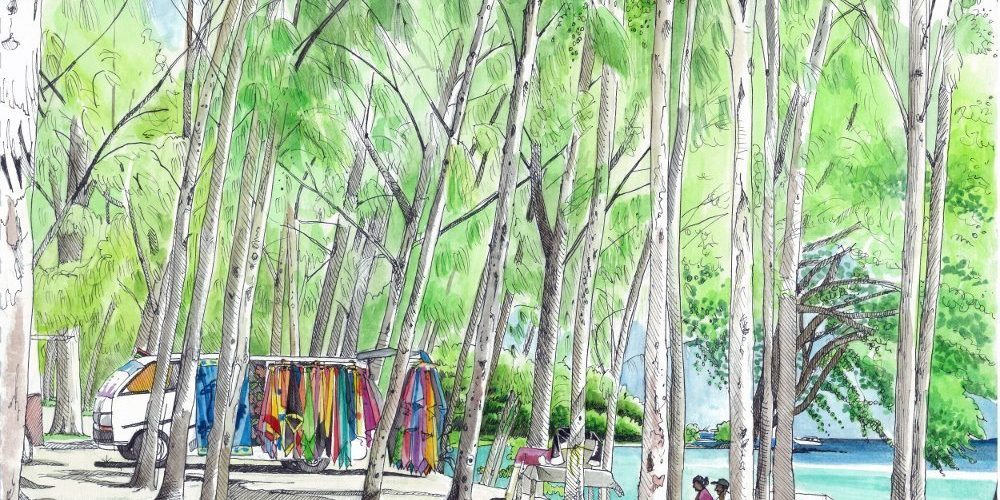 Mauritius is a tiny dot of land on the vast expanse of blue that is the Indian Ocean. Travel south, and you hit Antarctica: east, and it’s Perth; west, and you’ll hit Madagascar; north it’s Oman. But each of these places is a very long way away, and you really do feel isolated from the world in Mauritius. I don’t know if it’s because of this, but there is a magical, Dr. Seuss feeling to the island: the people don’t exactly look like characters in his books, not being particularly fluffy, but they are multi-coloured, with origins in China, India, Europe and Africa; and the landscape most definitely looks like a Dr. Seussian one, with bobbles teetering on top of mountains, and adorable bottle palms and the like that are straight from the pages of his books. And to me, from the very start, Mauritius was most definitely Sola-Sollew. To me, it’s paradise.

There’s a small sandy beach in Mauritius on the north coast in a village called Trou-aux-Biches. I had the great fortune to spend six months living there. Early one morning, I took my cup of tea and my drawing kit to the beach and painted what I saw. The coconut trees behind me threw shadows onto the white sand and boats bobbed in the turquoise water, waiting for young Mauritian guys in mirrored sunglasses to take the helm and churn up the tranquility of the lagoon, tourists on board, or venture past the reef and chase dolphins messing about in deeper water. In my drawing, a man walks purposefully from left to right: he has just greeted the man walking in the opposite direction, with the tiny child beside him. She was an adorable girl of about six, who was skipping happily through the shallows, her perfectly-coiffed, jet-black plaits bouncing behind her. As the two men met, they greeted each other warmly; two native Mauritians, with the beach still to themselves before the hordes descended, apart from the tourist with the paints.

This sketch is what I see when I turn through 180 degrees: these are the coconut palms throwing the shadows onto the sand that you see above. When my husband first visited Mauritius, he was just seven years old, and the trees were tiny. Everything grows fast here: cyclones periodically raze most vegetation to the ground, but it never stops creeping back. For over fifty years, my husband’s aunt and her family lived in the house on the right, and my family and I stayed in the apartment on the left. The white picket fence is ten yards from the orange awning; hop over it and you’re on the sand, literally a stone’s throw from the lagoon. All day long people walk up and down the beach – samosa sellers, hawkers, tourists, and there’s never a dull moment – not until the sun starts to set and peace descends. This is what my auntie-in-law looked out upon. Every day. For fifty years. My auntie-in-law and her daughter told me of the time they endured a cyclone, and the sea was trying to carry off their house. “You remember Bou bou, the dog,” they said. “Yes!” said my husband. “Of course I remember him! We named our first dog after him – I loved Bou Bou! I used to make him dive for stones.” “Well, said, my auntie-in-law, “he was in danger of being washed away by the storm. He was in the doorway – here – with all four paws clinging for dear life to the frame of the door, barely visible through the surf. We were clutching his fur, trying not to lose our grip…” Happily, Bou Bou lived to see another day.

This was drawn a little later in the day, with my back to the two houses, after people had had lunch and were generally lazing about. It was mid-winter, which in Mauritius means you will probably get sunburned, but you may also be rained upon for a minute or two. I enjoyed drawing the tourists as they alternately frolicked in the lagoon and frantically packed up their towels. You can see the cloud threatening overhead, but I’m Irish, and I know what clouds are going to do next, so I bided my time. You can see a bright yellow craft full of day-trippers. These boats drag along huge inflatable rings they call “bouées”. I’m sure I haven’t spelled that right. The driver of the craft straps tiny kiddies onto these “buoys” and off they go…tearing up the reef. The kids love it, but the boats make an almighty racket and disturb the peace something terrible. I would wish them all well, but every year there is less sea-life to be seen in the water of the lagoon; soon it will be the sterile basin that you can see in other parts of the island. On my honeymoon fifteen years ago, there was so much life under the water just next to the shore that I was terrified and kept having to catch my breath. Two years ago, it was still scary: I finally solved this problem by sending my husband ahead of me, so that he would meet the shark first (there aren’t any in the lagoon, but you never know). Last year, it just wasn’t scary. Actually, it was worse, but in a ghost-town sort of way. Very sad.

I always thought living on the beach would be nice, but I had no idea just how blissful it would be. One has one’s dreams: someday we hope to live there, but I don’t think we’ll get fifty years out of it. We’d make do with whatever we get.