Music for Everyone with St Agnes Orchestra Crumlin 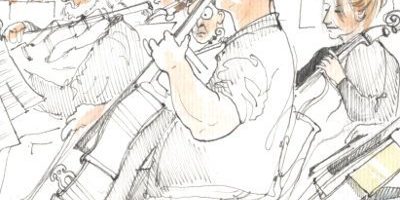 The St Agnes Orchestra, or the St Agnes’ School Violin & Orchestra Project is a full orchestra…with a difference. It’s for everyone, regardless of means or opportunity. It’s based in St Agnes Primary School Crumlin, in Dublin. All pupils learn to play a stringed instrument and classes take place during the normal school day, so parents don’t have to take children to out-of-school lessons; there is no charge for use of instruments and tuition is free, making the music truly available to all. I was lucky enough to bump into someone in Kinvara last Saturday – American Independence Day – who told me the orchestra were coming to Kinvara, a few miles down the road from my home in Galway, and I went along with my friend Ailve to hear them play. You can access the post by topping up your web wallet with 20 stellar lumen tokens (the price of a stellar lumen is currently [price id=”stellar” fiat=”usd”] ) if you haven’t already done so and then making a micropayment of 2 lumens to continue reading this post   Remember: NO subscription required, NO monthly fees, NO personal information, just a new secure micropayment mechanism for content you want to see. I grew up surrounded by classical music. My father drove a white Citroen DS with seats in the back that you could fold so the car could be used as an ambulance. That was quite cool except that the passenger door had to be replaced, and my father, in his wisdom, chose a blue one. This gave rise to great merriment at the school gates. Despite this two-tone mortification, I remember the car fondly. It was the first time I heard classical music outside my home. There was a loony old-fashioned tape deck in the car which took enormous tapes, the size and depth of large paperbacks. Dad’s choice of music fell into two categories: classical and stuff for us, ie. a single Abba album. Of the classical tapes the ones that made the biggest impression were Beethoven and Mozart – and Tchaikovsky’s 1812 Overture, which made a lasting impression, perhaps due to the cannonfire that punctuated it. My father’s mother had played violin in an orchestra all her life and continued to play into old age, even as Alzheimer’s slowly claimed her mind. I have her beautiful violin now and my children play it. My younger daughter’s wonderful music teacher, Tommy Keane, loves to have a whirl on it before class starts and always comments on its beautiful sound.

My older daughter played it too before she lost interest in any music that didn’t come out of a phone. For that reason I’m so grateful for this sketch I made a couple of years ago. I can see her practicing in the background, but even then I think there was duress and a bribe involved.

Last week I joined a Samba drumming group in Kinvara. It was terrific fun, and I shall bring you drawings of the group in action at the first opportunity. Afterwards, I was enjoying a nice cup of tea in Kinvara with the lovely people from the group, and that’s how I heard about the concert that would take place that evening. Ailve and I went along to the Community Centre just before eight o’clock and made our way to the front row. The St Agnes School Violin & Orchestra Project contains many smaller groups, covering an age range of 70 years, all of whom were represented on Saturday night. Here they are in action:

Being the Fourth of July, the orchestra started with the Star-Spangled Banner. This was followed by pieces from all over the wolrd. My favourite was a lullaby from Japan called Forest Owl by Keiko Yamada. The conductor, Dr Sandra Dackow, was a special guest from the USA. She is a passionate advocate of making music available to everyone. She was a most vigourous and enthusiastic conductor, bring her musicians with her every step of the way. I hope my rapid sketch conveys that.

The members of the orchestra spent a couple of days enjoying the countryside of Galway, including a trip to Inisheer in the Aran Islands. Many of the younger members had never visited the West before, and Joanna Crooks, the director of the orchestra, says that everyone had such a lovely time she hopes to repeat the visit next year. If you’re a music lover you should try and see this inspirational group…and remember – it’s never too late to join in. [crypto-donation-box]
Category: Feature ArticlesBy Roisín CuréJuly 9, 2015Leave a comment
Tags: music