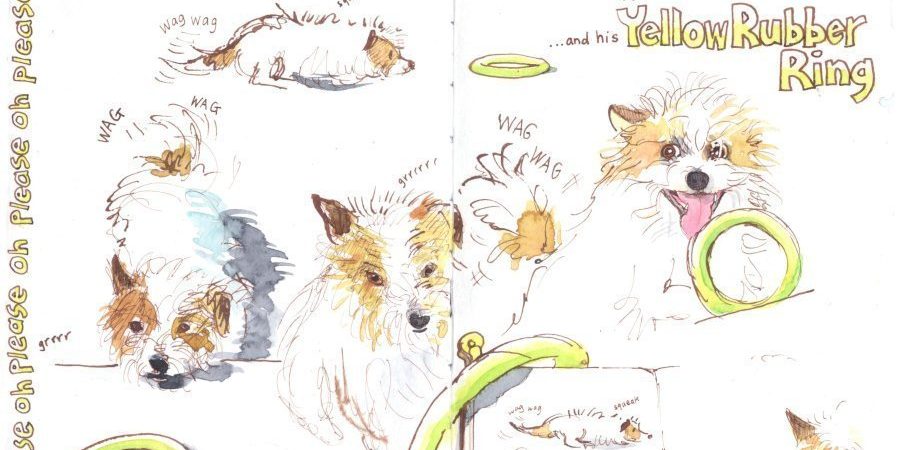 We all sit outside and have elevenses (time is meaningless these days). My husband Marcel and I and our son Paddy (18) have coffee, and Liv (15) has tea. Honor (20) hasn’t yet made an appearance. Coffee break is sacred in our house. The coffee has frothy milk in it, it is made of freshly ground beans and it often comes with something nice to nibble on the side. No one (me, basically) is allowed talk about politics or jobs that need to be done around the house during coffee break, although this rule isn’t always adhered to. Today we sit on flagstones outside the front door because it’s sunny. Reuben the terrier wants us to throw his yellow rubber ring. To say “Rueben the terrier wants us to throw his yellow rubber ring” is like saying “Peter the human being wants to breathe air”. Reuben is obsessed with his yellow ring. He was given it on Christmas Day, opened the wrapping paper with his teeth, and ever since that day has been in love with it.

Today he presents it for throwing in as many ways as he can think of, which mostly involve putting it at our feet and wagging his tail, although he does at one stage hang it on the yellow bulldog clip at the edge of my sketchbook. The he asks as nicely as he can to have it thrown. He makes tiny yips and some growls that could sound a teeny bit threatening if you didn’t know Reuben, and the fact that he cannot speak but only growl.

Paddy and his friend come back from a fishing expedition. They are wearing matching sun hats belonging to Paddy’s friend, which he bought in Spain. Each is white with neon orange hibiscus flowers on them. We are just coming to the end of dinner, and we have given up giving up wine again. “Well, boys?” says Marcel. “I assume you are both groaning under the weight of your catch.” “No,” say the boys, “we didn’t catch anything.” “Was it the hats?” says Marcel, and I laugh very loudly and a lot, vaguely conscious my extreme mirth may be connected to the glorious wine we’ve had. Soon, Paddy’s pal’s dad, a good friend of ours, comes to collect him. We have a socially-distant chat on the doorstep. We discuss the number of people who lost their lives to covid today in Galway (44). We talk about how life has changed. Our friend tells us he and his wife enjoy an online group quiz with a group of friends on Friday evenings. It sounds like fun. Reuben sits at our friend’s feet and makes it very clear he is happy to see someone other than us.

I would say I’ll remember that next time I see a yellow rubber ring hanging on the edge of my sketchbook…but I don’t really blame him.