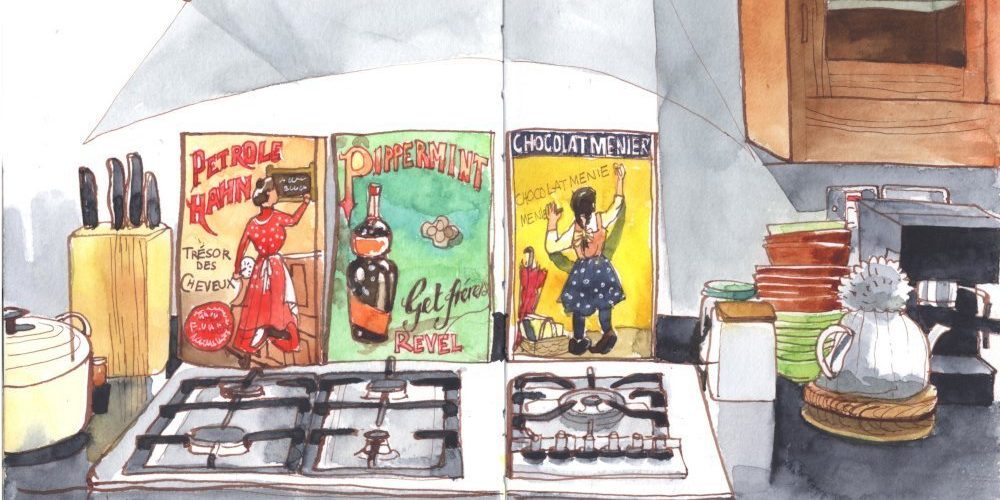 This is Drumacoo Abbey, about a mile from my house. To get there you walk along a country road, past the glowering ruins of Tyrone House, the road twisting and turning like a river, with grassy fields on either side, each a cascade of dandelions and daisies. The colours are bright, fresh green of the grass, intense yellow of dandelions, white of daisies and grey of the dry stone walls of limestone – with more bright white of their lichens. All the colours are saturated. The old part of Drumacoo Abbey dates back to 1250: that’s the bit on the right in the above sketch, with no roof. The newer part is a mausoleum, built in 1830 as a final resting place for the St. Georges, the inhabitants of Tyrone House from 1789 until 1905.

It’s a gorgeous day and the wind has dropped, so I invite Paddy (18) and Liv (15) to come for a walk to Drumacoo Abbey. They agree, but Paddy acts the maggot to Liv in many ways just before we set out (spraying water on her, being a basic pain in the ass in a brother sort of way) so that she decides she’s not going anywhere with HIM, and it takes a wearying amount of time to get him to apologise to her in a way that sounds credible…you know the sort of thing. Eventually we set out, three abreast. Four abreast, as Reuben the small white terrier is part of the troupe. It’s warm and sunny. The teenagers have each brought a flask of tea, and Liv has made one for me. At the abbey, we nip over a gate and cut through a field to make a short cut to the abbey. The first thing we come to is St. Sorney’s Well outside the grounds of the church. The kids are clearly enchanted. We walk around the old graveyard. You can’t imagine a nicer place to be buried. I settle down to draw a stone plaque at the entrance to the mausoleum, entry to which is barred by two large red iron doors. There’s an extract of a poem on it by Sir John Betjeman about Ireland and the St. Georges, referring to the fact that the family died out through its own mismanagement, excesses and louche behaviour.

Graves of spinster, rake and lover

Sings its own seablown Te Deum.”

I explain to Paddy and Liv that the St. Georges were known for impregnating local girls and then failing in their responsibilities; for producing unmarriageable women; for wanton behaviour between locals and landowners, without wedlock, and general chaos. The teens and Reuben head off to look for the grave of a family friend, and I get on with my sketch. They return, having found our friend’s grave, and we set off home. On the way back, they test Reuben’s loyalty to me: they make me hang back from the group to see if he will stop dead and refuse to go on. Sure enough, he won’t go on without me. They do the test with Paddy, and not alone does Reuben trot merrily on, he barely looks back. I feel terrible for Paddy, but Liv decides to do the test too. I dread what will happen – Reuben adores her – but to my relief again the dog barely acknowledges that she’s dropped behind and left the pack. Paddy and Liv are disgusted, and agree that they are going to take a hit out on Reuben.

I remark to my husband Marcel that there is no one in the world, no matter how rich, or famous, or accomplished, who was having a better experience than I was with the kids. It cost nothing at all, and was the simplest of pleasures, but it was a high point for me, for all of us I think (until the bit where Reuben told them he didn’t care about them).

For some stupid reason I decide to finish the sketch of the kitchen I started earlier. Even though I am exhausted – not being a night owl – I fear an unfinished sketch making an ugly stain in my sketchbook. Actually, I want to test a theory I teach: to start with the bit you like so that at least you’ll have that part of the scene in your sketch, even if you don’t fit in much else. I remember something else: draw the bit you like big enough to fit lots of detail in, or you won’t have the fun you thought you might. The bits I like are the three colourful metal signs Marcel bought me in France many years ago. They’re sort of stained now from splashes and grease from the hob, but they were never meant to be propped up there for so long. Lots of things in my house weren’t meant to be like that for so long. I won’t even start because I won’t stop. Although I may yet draw the stairs, which were thrown together in an afternoon by Marcel as a temporary measure…eleven years ago. No one is allowed to talk in the house if someone is going up or down the stairs, as the wooden slats are so loud when you step on them that you won’t be heard. Oh well. It’s nothing in the grand scheme of things…

Then again, for your viewing pleasure, perhaps I will stick to the more picturesque angles of the house. Tomorrow: some potted plants…