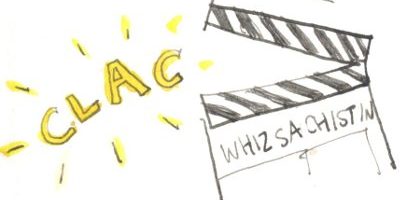 My daughter Liv attends an Irish-speaking school called Gaelscoil de hÍde. This has been a great gift we have unwittingly given our children: they had an absolute ball in the school. One of the many lovely things they’ve done is to be asked to take part in a new game show for the Irish language TV channel, TG4. It’s called Whiz sa Chistin and is the Irish language version of Kitchen Whiz, an Australian cooking game show for kids.

Liv’s class had made the trip out to the studio with her classmates the previous week to take part in the game show, but Liv had bottled out.
“I HOPE no one is sick today Mum,” she’d said to me in the morning. “I’ll DIE of nerves if I’m asked to do it!”
Then, when I collected her later on that day, it was a different story.
“I was asked to do it,” she said. “I had my chance! And I turned it down! Now I really regret not doing it.”
So when she was given a second chance, she jumped at it. That’s how I found myself at a most unglamorous studio in Galway yesterday.
“It’s not that nice outside,” said the girls as we drove into the grounds of a neglected property where the game show was to be filmed. “But the studio is lovely. It’s like the only money they spent was on the studio itself.”
Our destination looked like a factory from some Iron Curtain dystopia, whose bleak exterior was at odds with the warm welcome we would find inside. A friendly young woman sat us down in a cavernous, deserted recreation room, asked the girls about their pastimes and took a few notes. As usual I was very impressed at how the girls understood every word of her rapidly-spoken Irish.
“I’m going to be sketching the proceedings,” I told her in my imperfect Irish as we made our way towards the studio. I don’t ask permission, if I mention it at all.

The studio was as lovely as the girls had promised, a riot of colour and bouncing with energetic people. I was immediately drawn to the silhouetted shapes of the camera men, in contrast to the bright, jolly colours of the set. The two young ladies in yellow aprons in the top sketch are the girls who came before our two, and soon our two ladies had donned their aprons, having decided yellow was their lucky colour. Foireann Buí! Team Yellow! The presenters, a beautiful young woman called Muireann and a lively young lad in a knitted bobble hat and a Connemara accent – the Kitchen Ninja – made sure they were as relaxed as possible. The countdown was made…

…and recording began. The first game was “Fíor nó Bréagach” (True or False) and my girl was against a girl with brown plaits and an orange apron. If they knew the answer, they had to whack a silver bowl on top of a pink cathode tube that lit up neon blue. My girl just wasn’t up to the mettle of the other young lady, and after the first round Team Yellow had fallen behind.

For the next game, the girls were asked to make the face of a pussy cat made out of rice and ham. They were to copy the Kitchen Ninja’s version. The clock started ticking…then –
“Lámha san aer!” came the shout. Hands in the air! Our girls won that round. I could feel my competitive streak, never far away, coming to the fore.

Next was another challenge: this time the girls had to make canapés. I watched the proceedings on the closed-circuit TV camera beside me. Hey, they were far away and I was sitting in almost total darkness!

Our girls made very neat canapés and the other team made less neat ones. The teams were given equal points. Hmmm.

Next was another round of Fíor nó Bréagach. Kate, Liv’s friend, was opposite the second girl from the orange team. More whacking of the silver bowls when you figured you knew whether the statement was true or false. But what’s this? Kate’s cathode tube wouldn’t light up! “Whack harder Kate!” was my silent shout. But – she can’t! She has a bandaged hand! And the cathode tube thingy isn’t working properly! It’s not fair! Stop! STOP!

I told myself it’s only a kids’ game. I forced myself to calm down. Team Yellow lost that round, but our girls were clearly having a whale of a time. But we weren’t out yet. Ten points separated us and there was one more round.
The producer approached the presenters for a brief conference. The counter was a long way off and I couldn’t hear anything. Here’s what the producer didn’t say to the presenters:
“Now lads, that last round wasn’t fair. The cathode yoke wasn’t working that well. Let’s give the entire game to Team Yellow.”

When all was checked, the last challenge got underway.
“You have to stuff this bowl of olives with these red peppers and things,” said the presenters, or something to that effect. The Kitchen Ninja showed them how.

The clock started. Team Orange had four olives left unstuffed when the bell went. Team Yellow had six. But it’s not fair! How can a girl with a bandaged hand stuff olives? Swizz sa Chistin, more like! Just as well no one had asked me to take part. Just as well I would not have been confident enough to shout at anyone in Irish.
Afterwards the girls were disappointed but resigned.
“I can’t believe I forgot that sardines were a type of fish,” said Kate.
“Win or no win, you did great,” I said. “Did you enjoy it?”
“Yeah, it was great,” they said. “But being made to dance at the end was SO embarrassing.”
The winners were fêted. The losers were given a bag of gewgaws to take home.

It was an enlightening morning. Lots of downtime while people faffed about – ideal for an urban sketcher. And an atmosphere I have come to associate with the Irish-language speaking world, a combination of relaxed calm and quiet efficiency. But I wasn’t sorry to leave, as it was so cold in the studio that my hands had turned to claws.