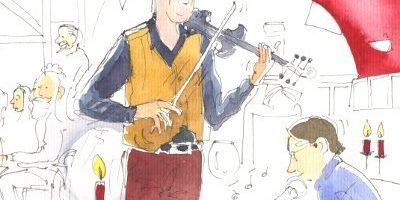 [twitter-follow username=”roisincure” scheme=”dark” count=”yes”] If you like this please +1 it! Culture Night is an Irish event which takes place in autumn every year, and this year it took place last Friday. It’s one night of cultural events in all the cities and all the counties of Ireland – and everything is free. You can enjoy all kinds of everything in the fields of art, dance, music, theatre and literature: Friday was a lovely, balmy evening, without a drop of rain, and with dozens of great spectacles on offer, the streets of Galway were thronged. For the last two years I have played my part, with presentations on urban sketching. When you give a presentation as part of Culture Night, you’re asked to involve some kind of practical aspect that the public can take part in, so I’ve encouraged people to try urban sketching for themselves, and shown them my own work. This year I gave myself a break, and decided to enjoy Culture Night as a punter. My husband Marcel and I perused the myriad events on offer and settled on a nice itinerary for the evening. This is a PREMIUM access article. We use a simple to use web wallet that can be filled up using a credit card, PayPal or with XLM using a secure payment system. Once you have paid, you will have ongoing access to the article from the device (tablet, phone, PC) that you used to pay for it. You can access the post by topping up your web wallet with 20 stellar lumen tokens (the price of a stellar lumen is currently [price id=”stellar” fiat=”usd”] ) if you haven’t already done so and then making a micropayment of 2 lumens to continue reading this post   Remember: NO subscription required, NO monthly fees, NO personal information, just a new secure micropayment mechanism for content you want to see. Our first Culture Night event: a blacksmithing demonstration given by Cumann na bhFear (Men’s Group). There’s a thing in Ireland called Men’s Sheds where men who might like a bit of company can go to sheds or industrial spaces and do manly things like welding and mechanics, whittle wood or whatever. For Culture Night, a Men’s Shed in Sandy Road, just off Prospect Hill in Galway City, showed the public how you forge and shape iron. A warm fire crackled away and metal glowed red as it was heated for hammering. Wondering if they shod horses there, I asked a bit about that, as I loved to watch the local blacksmith at work as a child. “How long would you get out of a horseshoe?” I asked Micheál Ó Toibín, on the left in the sketch. “Depends on the surface the horse is travelling on,” he said. “I know a farrier who goes out to the Aran Islands once a month – their horses’ shoes are worn down in no time. He has them all lined up in order of wear and does them over a couple of days.” This was mostly said in Irish, which was a treat for me, as I don’t get to use it much outside my kids’ school. But I was conscious that Marcel is a Sasanach (Englishman) and doesn’t understand Irish so I was partly relieved when I realised I probably wouldn’t be able to keep up with Micheál’s Irish, and switched back to English. It was fun to draw the men at work. You can see the brazier behind the men; it’s a converted back boiler. The men are, respectively, renovating discarded masonry chisels (left) and making a decorative poker for the fire (right).

Time flew over tea and Swiss Roll and soon it was time to go to the next Culture Night event. Jennifer Cunningham was giving a talk on printmaking and a demonstration on how the process works in Galway City Library on Augustine Street. She showed us a short film on her work, made by the filmmaker Des Kilbane. In the film and in person she spoke about her printing methods. As well as painting, Jennifer etches zinc and copper plates, and she told us how she likes to depict derelict, abandoned spaces. I found this focus on the melancholy to be quintessentially Irish, and it’s not something I can identify with (why seek out sad things?) although Jennifer did point out that the miserable wastelands and derelict hotels, abandoned beaches and decaying nightclubs in her paintings and prints are the very places she grew up in on the outskirts of Galway City. Jennifer told us about being careful to use non-toxic inks now that she has a two-year-old running amok. I wondered if many fathers of toddlers switch to non-toxic inks until their children are at school. I shared this thought with Marcel. “Oh God, so boring,” was his predictable reply, which is what he usually says when he has no other answer. It wouldn’t be the first time this sort of thing has come up. After a while Jennifer asked a young girl in the audience to draw a picture, which was then made into a print using a sheet of zinc. The girl drew a tree with no leaves, and a strong and simple shape it was too, lending itself nicely to an aquatint. Here is Jennifer telling us about her method. I wanted to be discreet – urban sketching tends to attract a lot of interest – so I just made a line drawing, painting it later. Jennifer had very kindly made some cakes for everyone and Marcel was helping himself to some banana bread, but I figured it was time to get to the next Culture Night event.

We had planned to see the amazing Andreas de Staic in a play called The Mackralaytors, about a group of artists living in Galway in a flat made of cardboard, who dream of getting their big break. We joined a long line of queuers snaking up three flights of stairs, hoping to get in. We inched our way forward, but when there were just two people ahead of us the line stopped. “Sorry folks, I think we’re full,” said a young man, and called up to a girl peering down from the top flight of stairs. “Niamh, can you fit any more in?” “No,” said Niamh, “I have them three and four deep. They’re crammed in as it is.” If we’d arrive two minutes earlier, rather than dawdling at the library, we would have got in, but Marcel and I decided we didn’t want to be packed like sardines, so we weren’t too disappointed. Our next stop was across the street from Galway Arts Centre. Rouge Restaurant is our favourite haunt in Galway – it’s everything I want in a night out, with great food, friendly service and brilliant live music. It’s French in theme, in flavour and in fact: the serving staff are all French and many haven’t learnt a lot of English, which gives them an inimitable Gallic charm. For example, I chose a cassoulet with goat’s cheese and a “chutney fig” on top, and I had a “salad French.” I worked as a waitress in Paris many years ago. At its very heart, service in France is exactly that: service. The boss in one place I worked made it clear that “serveurs” should treat the diners as guests in our own homes: nothing would ever be too much trouble. That’s what you get in Rouge, and always with typical French confidence and good humour. The menu is very small. As well as the “amuse-bouche”, there’s just one meat, one fish and one vegetarian offering on the menu. I spoke with the proprietor some time ago and told him how I appreciated that. “There’s so much waste involved in running a restaurant,” he said. “I cannot abide that. By sticking to three items I have very little waste, and that way I can keep the prices low.” That’s an ethos I can really support. Rouge were offering an après-Culture Night glass of kir and live French gypsy music, beginning at 11pm. Marcel and I were hungry, so we decided to have dinner there first, and enjoy the music later. We had a super meal and then the band struck up…two gentleman on electric violin and acoustic guitar played Django Reinhardt and Stephane Grappelli type music which gave a great atmosphere. Their playing was lively, buzzing, pure magic. Soon, Culture Night festival-goers started to file in for their free kir, and with the place filling up fast, Marcel and I were joined at our table by two musicians who had just finished a gig at another restaurant. They were lovely guys and while I had a deep and meaningful conversation with them about the nature of art and finding one’s mojo, poor Marcel was having his ear bent about the joys of leaving the European Union by a fellow Brit. Marcel sees both sides of the argument but this gent was firmly pro-Brexit, and very free with his opinions. Then the staff brought us each a very welcome glass of kir, the pale pink-gold drink glowing softly in the candlelight.

I have wonderful, dreamy memories of holidays in France as a child: freshly-baked croissants brought to the campsite by a guy in a Citroen Dyane; my dad insisting we had to have a swim before breakfast; glow-worms on the wall at night and cicadas singing in the still afternoon… I lived there for a year once (where I learned French and made an atrocious but well-meaning waitress). I miss that wonderful country, but Rouge brings me back. Our meal and the music was a great way to end the night, and after a long and culture-filled evening, Marcel and I made our way home. I think Culture Night is a fantastic idea and it’s a great way to get to do things you might not have tried before. Maybe next year I’ll do an early-evening Urban Sketching presentation, then do the whole cultural thing all over again. Forging iron, printing with zinc, listening to musical gold…sure what’s not to love about Culture Night? [crypto-donation-box]
Categories: Daily Life, Painting in Ireland, UncategorizedBy Roisín CuréSeptember 19, 20162 Comments
Tags: Culture NightGalway City