How Sketching Saved Me 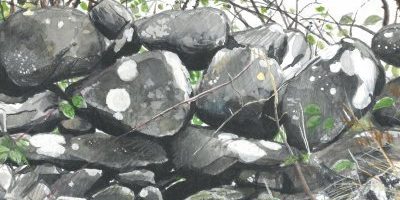 You know what they say – if just one person feels better after hearing my story, then it’s worth the effort.

I was a frustrated artist. I was at home with kids (on a building site, but that’s another story), bags of ambition and nothing but rejections from literary and illustrators’ agents and publishers, who had every reason to send me rejections since I never sent them anything that was anywhere close to publishable.

Time passed, and I was ready to give up the whole shebang. The rejections and the fact that I was getting nowhere (notwithstanding a steady stream of art commissions) eventually wore me down. My brain was beginning to mess me around. I was ready to give it all up, and try to work with dogs, which are great because they don’t let you focus on self-pity – you’re usually too busy running after them as they try to bring down a pensioner (in the case of Boubou the boxer), chase sheep (Pip the Jack Russell) or pregnant cattle (Ruby the second boxer) or even attack your child (Cato the last boxer)… anyway I liked being with dogs a lot and I figured I could do something with them. Then one day my friend Emma asked me to design her wedding invitations. That was a lot of fun, and they went down really well with her guests. I figured there was a market for custom-illustrated invitations and turned it into a business. It grew, and I found that I loved working with brides – in spite of the old cliché of brides being, well, bridezillas – I always found them wonderful to work with. One day last year one of the country’s “celebrity” wedding planners rang me out of the blue and asked me to become a supplier. So now I don’t have to look for business anymore, it comes to me. (Note for anyone interested in doing this: wedding illustration is a great business, lots of fun and more to the point you get paid for illustrating, which isn’t always so easy.)

So far, so good. I swore I would never want to do anything else. But I was still frustrated. I had a powerful urge to be creative, and I know that’s vague, but it was a vague kind of feeling. An urge to paint? Not sure. To draw? Don’t know. It was non-specific. But I knew it involved more than drawing churches and hotels (and other more fun things too, it has to be said) on wedding invitations, fun though it was. And I still dreamed of fame and fortune, in a somewhat non-specific and pretty child-like way.

Then a series of chance events intervened to turn my life around.

The first thing was that my family and I went to live in Mauritius for half a year. The second thing was that just after I arrived, I received a copy of Everyday Matters, by Danny Gregory. It’s about drawing what’s in front of you just for the sake of it. I hadn’t really done that for years. Couldn’t see the proverbial wood for the proverbial trees. But Danny was compelling – he’s a bit charismatic, is our Danny, and he writes incredibly well. So I drew a bottle of ink…and then I drew my glasses…and then one day after that I drew the sea. Now that last bit is significant: it was the first day of the rest of my life, really, because it marked the first time I practiced what was to become my passion, my raison-d’etre. I was scared to go and draw in public, but I was under Danny’s spell at the time, and full of fervour, and so I just did it. I wondered if Mauritian people were the attack-on-sight types, and I wondered if I’d ever return. A Mauritian person did talk to me as I sketched the sea: she was tall, and sweeping the path, and she said, “You’re drawing the sea. The sea is very beautiful,” smiled and went on her way.

In the ensuing months, I drew all over Mauritius: in the mountains, in the market, in Hindu temples, in the mosque, on the beach, under a mango tree, in restaurants, in the airport. I drew in the company of a Tamil guide, of dozens of boisterous small boys, of one silent German boy, of talkative working men, of a plump man with a bandana and a shark tooth necklace who looked like Billy Bunter, of French tourists, of two lady doctors, of a pair of newlyweds, of a samosa seller, and of religious devotees of all faiths visiting their places of worship. I drew in the sun, at night, indoors, in the shade, in the rain. My drawing went from stiff and formal to loose and sketchy. I didn’t think about finding fame and fortune anymore, but how to find an hour or two between family commitments to get away to draw. Above all, I found peace.

Take this drawing, for example. It’s a mile or so up the road from me, where I meet my daughter off the bus stop. I often wait for her for a few minutes, which gives me time to sketch over a day or two. That day, instead of fretting about stuff, I drew. The subject matter is of no great importance – it’s only the silos that they use to store feed for the horses at the stable there. And the white van isn’t even finished – the driver took off in it before I got a chance to finish it. But the picture sums up everything I love about sketching. It’s like Being, only with a pen.

The third thing that happened was that I was given The Art of Urban Sketching by Gabi Campanario…and a whole new chapter opened up for me.