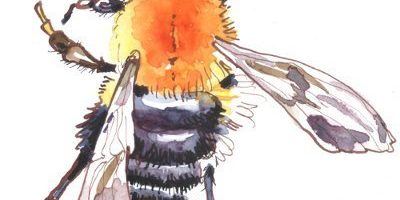 The other day, my husband Marcel and I were driving into town. There was a buzzing coming from somewhere in the car.
“There’s a bee in the car,” said Marcel, who dreads getting stung.
“It’s a bluebottle,” I said.
“It’s a bee,” said Marcel.
“Oh yeah, there it is,” I said, having spotted a fat, orange furry lad buzzing around the boot of the car. “I’ll let it out.”
“No, don’t do that,” said Marcel. “It’ll get separated from its colony.”
We have all heard about the terrible plight of bees.
“Of course!” I said. “You’re dead right. We’ll let it out back home.”
After a while and a bit more enthusiastic buzzing, Marcel changed his mind.
“Actually, you know what,” he said, “just let it out.”
“No, I can’t now that you said that bit about getting separated,” I said.
“It can be an explorer bee,” said Marcel. “And it will suffocate in the car when we park.”
“Don’t worry,” I said, “I’ll leave the window open a crack.”
It didn’t occur to either of us that there was enough air in the car for fifty bees to breathe for about a year and a half with the windows shut tight. When we parked in the multistorey, we left the window open just enough for what we imagined the bee would need to breathe comfortably, but not so much as to invite a burglar (or at least one who wasn’t afraid of bees).
Off we went into town, did some dull bank stuff, had lunch and set off for home.
We were in heavy, slow traffic when Marcel suddenly started freaking the lid, flapping the air around him…forgetting in his alarm that you’re only supposed to proceed in a car if you’re watching the road. The bee had clearly decided to explore the front of the car.
“Marcel! MARCEL!” I shouted, but it was too late.
CRASH!
We hit the car in front. We both pulled into the verge. Marcel leapt out and so did the occupants of the other car, a fit-looking, blonde and attractive middle-aged couple. The woman had been behind the wheel. Marcel apologised profusely and I could see him gesticulating dramatically about terrible bee attacks, explaining that the fright he had received had caused him to crash into their car.
The couple didn’t care what had made him hit their rear bumper. They were on holiday from Germany and the car was a hire car. Neither Marcel nor the couple could find any damage at all, but the Germans (understandably) were reluctant to let the situation go. They were there for ages, looking and looking at each other’s bumpers. For my part I couldn’t believe that such a loud noise had left no damage but there wasn’t any. Marcel said the couple didn’t see the funny side – but I wouldn’t have been laughing at the thought of the hire car company hitting me with a stiff bill for a damaged bumper. In the circumstances, I thought they were more than reasonable.
Eventually we each got back into our respective cars and went about our journeys. At home, there was no sign of the bee – I guess it had nipped out in its attempts to become an explorer bee after all.
Next morning I asked Marcel what he’d learned about the incident; the correct answer was not to panic when a bee approaches.
“To never go to Germany,” he said, in a spectacular example of not learning from your mistakes.
(Caveat: Marcel has asked me to point out that his mother is Austrian, his brothers were born in Germany and he doesn’t have any problems with Germans. It’s just that he wanted to deflect the blame. He didn’t ask to add that last bit.)

A few days ago, I was driving home from a party. Sixteen-year-old Paddy was beside me in the front and Marcel and Olivia, our youngest, were in the back. It was about half eleven at night but the sky still had stripes of orange, yellow, pink and gold near the horizon. As we neared our house we passed a field with a few horses in it, one of whose ears could be seen, black and pointy against the sunset.
“Look at the silhouette of the horse,” Marcel and I said in unison, I in my normal accent, Marcel in his public-school British accent (that bit is important).
“I said it first,” said Marcel.
“I did,” I said, even though we’d said it at exactly the same time.
“I said it first,” said Marcel.
“I said it first because I am in the front and so I saw the horse first,” I said.
“Mum said it first because it takes longer to say haawse than horse,” said Paddy.