No Time to Sketch? So Draw in the Cracks

You are here:
Painting tips and techniques 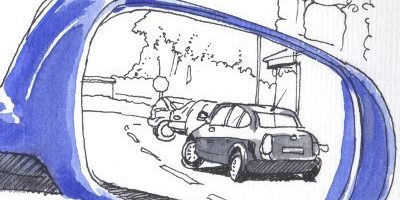 or in the UK and EU :- Jackson’s Art Supplies

There are three pens I always use. The first is the Platinum Carbon pen, which can be used with cartridges or a converter. A converter is useful when you are choosing your own ink. The Platinum has never let me down: they tell you to use it every couple of days to avoid clogging, but I have left it longer than that and I have never had a problem in many years of use. It is also very reasonably priced and is available to buy from Amazon :- The second pen I am never without is the Kuretake Brush Pen. I always use waterproof Platinum Carbon ink cartridges in my brush pen. This is available to buy here from Dick Blick in the US :- Kuretake Brush Pen

The third pen I really enjoy using is more expensive, but I chose it for its flexible steel nib, which gives a lovely variable line thickness. It’s the Namiki Falcon and is available here from Amazon :- I find that grey ink gives a softer line than black – it’s more like a pencil line – and I always make sure at least one of my fountain pens contains grey ink. I use Lexington Gray by Noodler’s, which is waterproof when dry, also from Amazon :- I use various types of watercolour paper, but one I come back to a lot is by Langton, available here from Dick Blick :- Daler-Rowney Langton Prestige Watercolor Blocks