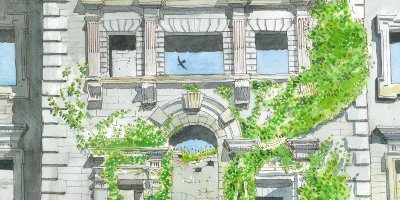 Tyrone House and the Fall of the St. Georges


The road where I live, in Kilcolgan, south Co. Galway, is like something out of Little House on the Prairie. There aren’t many trees, the wind has an unfair advantage and makes the most of it, making its presence felt all the time. People are always arriving at our house and saying, “It’s really windy here! It’s not windy anywhere else!” Yes, thanks, we know.


There’s a field between our house and the Kilcolgan River. It’s an estuary, and rises and falls with the tide. It is full of oysters and trout, the former of which I have partaken regularly, and the latter of which I have seen leaping but have never eaten.


In winter, the wind tears all the heat from your hands. The landscape loses most of its colour, and everything sinks back into muted shades of purple, olive green and blue greys. There are days when just getting to the car leaves you traumatised, not to mention soaked. Trees have given up trying to grow straight, and storms make you fear for your home when you are lying in bed at night.


Then comes May, and you remember why it’s the most beautiful place in Ireland. The sky is a vast canvas of blue and white, the fields are the brightest green and everywhere you look there are carpets of dandelions (nodding in the wind). By June, the hedgerows are bursting with wildflowers of every description, the grass is four foot high and it’s heaven, even when the drizzle returns.

You don’t have to walk far from my home to get to Tyrone House. It’s a ruin now, having been burnt out during the War of Independence in 1921 by the local chapter of the IRA. They had heard that the hated Black and Tans were going to use it as an infirmary, and they decided to put the house beyond use. It had been abandoned some years earlier, and the only remaining resident was an elderly caretaker. He was the great-grandfather of my neighbour James Martin. “They had to carry him out, Róisín,” James told me. “It broke his heart to see the house that he’d looked after up in flames.” The IRA carried him, bed and all, into an outhouse before destroying the house.

This is a PREMIUM access article. We use a simple to use web wallet that can be filled up using a credit card, PayPal or with XLM using a secure payment system. Once you have paid, you will have ongoing access to the article from the device (tablet, phone, PC) that you used to pay for it. You can access the post by topping up your web wallet with 20 stellar lumen tokens (the price of a stellar lumen is currently [price id=”stellar” fiat=”usd”] ) if you haven’t already done so and then making a micropayment of 2 lumens to continue reading this post   Remember: NO subscription required, NO monthly fees, NO personal information, just a new secure micropayment mechanism for content you want to see.
Until a few years ago, anyone could roam the empty ruin. But James told me that the County Council insisted that the house was fenced off for health and safety reasons. Now you have to have permission to wander through the building. I sat and painted the façade one day a couple of weeks ago. It was one of those amazing hot and sunny spells we very occasionally get in Ireland. The man who claims ownership of the house and its grounds was very pleased to see me sketching, and told me I could come and go as I pleased.


It was heavenly to sit in the sunshine and paint the façade of the house, with the vandalised architraves, the wall softened by ivy and the squares of blue sky visible through the gaping windows.

The house was built in the Palladian style in 1779 by a chap called Christopher French St. George, by the Waterford architect John Roberts. His people had made a load of cash and I guess he wanted something to show for it. Apparently the house was full of the finest furniture and paintings, and no expense was spared in the detail. You can still see the ghosts of Italian-looking plasterwork in the foyer and grand fireplaces throughout the empty rooms. One room at the back of the house has the remains of the biggest fireplace I’ve ever seen. You could roast an entire cow in it, never mind a pig. Over the next hundred years, the St. George family made quite an impression on the area: one of them helped to found the Galway Blazers, a group of people who like to cause terror to foxes on horseback. He also established oyster beds in the river behind the house, and some of the finest oysters in the world, if not the finest, are harvested here still. The house is close to the river, and the view from the rear windows is beautiful.

I’m so lucky to see the house from my bathroom window. The sunsets are fabulous – in fact, those same sunsets, two hundred and thirty years ago, were one of the reasons the site was chosen: they were regarded as being the best in Europe.

I get the impression that the locals weren’t too fond of the St. George family. Someone told me that if you passed one of them on the drive up to the house, you had to turn away so as not to look at them. What nonsense. Another time, I visited the ruin with my mother. There are stone steps leading from an apparent hole in the grass down to the scullery. As we went down them, my mother remarked that it was sad that no one uses them anymore. I mentioned this to a local whose people have lived in the area since 1690. “Ha!” she snorted. “Sad! Good riddance, more like!” The drive from the house used to pass though woods full of deer. Now when you look through the arched window of the front entrance, you look over fields owned by the locals, where they rear cattle. A walk along the roads reveals the occasional cottage adorned with surprisingly ornate cut limestone.

The main house is three stories high, with four huge rooms on the ground floor, a foyer and a stairwell. The stairs have long since collapsed – it was probably the fire that did for them – and now there’s a vertigo-inducing hole where they used to be. A friend of my husband’s took a little wander around Tyrone House one night. Alcohol had been consumed. He fell down the stairwell and broke his leg. The upper floors have all disappeared, leaving the building open to the sky. Down the stone steps alongside the house is the scullery. It is exactly the sort of place a child would love to discover: room after room, all with tall windows opening onto the ditch surrounding the house, which looks for all the world like a moat. The light that filters in has a greenish hue, and is pleasant on a warm summer’s day. Behind the main house there is a grassy path, which leads to outhouses and all kinds of structures. There is a walled garden, where the residents once grew grapes, peaches and pears. Just after that you come to a large castellated building, which leads directly to a pier, and it is my intention to use it as a place to enjoy a dip on a hot day. There is a turf store near the pier (turf was delivered by sea in Galway hookers from Connemara), and a castellated building the purpose of which I don’t know.


When I had my first child, the public health nurse who visited us knew the old ladies who lived in Tyrone House. “One of the old ladies was 104 when she died,” she told me. “Neither of them ever married.” I noticed in a peer’s list that some of the St. Georges married other St. Georges. I have a funny feeling they might have found it difficult to find suitable matches as the years went by.


The end of the St. Georges came a mere one hundred and forty years after it began. The last St. George left the in 1905 and so the house was unoccupied, other than by the caretaker, when it was burnt by the IRA. It’s not so nice within the ruin walls when there’s no sunshine. It’s spooky, and the caw-caw of the rooks is suddenly not so much charming as scary. There are empty packets of cigarettes scattered on the ground. The basement under the house is littered with the remains of teenage drinking sessions. Perhaps it’s as well that it’s all fenced and barricaded off now.


Check back again for more sketches of the grounds of Tyrone House – it’s a treasure trove of stunning vistas for the watercolour artist. Some winter storm will probably bring it down one day. I’ll be sure to capture it in watercolour again before it does.