Blowing Their Own Trumpets: Sketching a Brass Band 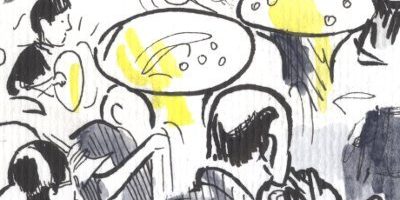 There’s a new picture house opening up in Galway City. A picture house is an old-ish Irish term for a movie theatre. It will be called the Picture Palace and it will show independent and art house movies, and it will have a bar. I am very excited about it because the only time you get to see any non-mainstream movies in Galway is when there’s a film festival on, and while we have a lot of those, I usually don’t hear about them until they’re over – if at all.

A neighbour of mine, Lelia Doolin, has been very active in getting the Picture Palace off the ground. Lelia is of my father’s generation (he was in university with her brother) and her energy, zest and joie-de-vivre are indescribable. She is also in my art class and that’s how I heard about a fundraising event for the new movie theatre that took place last Saturday night.
“There’ll be a brass band playing soundtracks to the movies,” she said, ” and there’ll be a big screen with clips from the films playing above the band.”
“I adore brass bands,” I said, “I’ll be there.”
Once I told a friend that if I ever got rich, I would hire a brass band to play for me. I said that in the meantime I might even learn to play the trumpet myself.
“No, you can’t do that,” she said firmly.
“Why not?” I asked.
“You mustn’t blow your own trumpet,” she answered.

On Saturday I left the family at home and drove to the Galway Bay Hotel in Salthill. Between feeding the troops and looking for parking I was very late, and I didn’t start drawing until four songs from the end – but I was grateful for the quick sketch I did get done. The band was Galway’s St. Patrick’s Brass Band, and they were magnificent – the sound was lively and rich with that deep warmth that only brass can provide. There was a young lad of about ten on cymbals – which he clashed with perfect timing – and during the theme tune of Star Wars he wore a Darth Vader mask, which suited the band’s all-black dress code very well. Other numbers included Dances With Wolves, Pirates of the Caribbean and The A-Team, so you can imagine it was a very animated affair. When it was over, the band’s PRO, David Kelly, approached me.
“Would you like to come and draw us while we rehearse?” he asked. “We’ve been going over one hundred years, you know.”
I said I’d be delighted.

The movie theme was fun: at the door you were offered popcorn and sweets, and one of the ideas of the evening was to dress up in clothes from one of your favourite movies. A few people had made a big effort, including a group of girls with the words “Pink Ladies” emblazoned across the backs of their pale pink satin bomber jackets. This gorgeous creature (she was a lot more gorgeous than this sketch suggests) had a full black skirt with yellow netting underneath, Lolita sunglasses on her head and I think she even had a lollipop, but I might have imagined that bit. As usual, the sketchers always play second fiddle to the photographer, and I was politely asked to move to make way for a big guy with a camera, who needed to get a certain distance from the girls…so I lost my chance to draw my girl properly – unless I wanted to put a big guy in black with a camera in the foreground. Personally, I’d far rather have a cool sketch of myself in my gear than your typical girls-in-a-row posed photo but that’s probably just me.

Eventually people started to register that there was a woman with a paintbox and a sketchbook at one of the tables. That’s when the band leader approached me, and the ladies in the sketch below asked me to draw them. Well, Lelia did. That’s her on the right. She looked splendid in a red Chinese silk kimono with white chrysanthemums on it. I had a lot of fun sketching a brass band. When I put this sketch on Facebook, I got lots of laughing comments (literally “Hahahaha”) – but I didn’t mean it to be funny. That’s just how I draw. I think the ladies were a little nonplussed too. But then the big photographer started taking pictures of me drawing, and of my sketch. I asked him if he wouldn’t mind sending me a lo-res copy of one of the photos, and I gave him my card, but it occurred to me (not for the first time) that he may have been affronted at being asked for a photo for free – whereas no one bats an eyelid asking for a scan of a sketch for free (which I am always very happy to do, but I’m thinking of revising that slightly). So far, the photographer hasn’t sent me anything.

Then I stared sketching the dancers in a desultory way. I knew I’d be driving home before too long and so I wasn’t drinking, and you know how it’s a bit different if everyone on the dancefloor evidently has enjoyed a glass. But the 70s disco music was terrific and soon I was jigging about, making my sketchbook bounce a bit. I admired one or two dancers – particularly the lady in black on the right, who had a very fashionable super-chopped fringe and a beautiful figure. She was evidently in the “cinema” community and smiled a lot. Then there was a tall red-headed guy in nerdy glasses dancing some great moves. That’s him on the bottom. He’s doing a kind of elephant-trunk dance there, or maybe an Egyptian type of thing. Teapot. I don’t know. But he was very inspiring and the tunes were great – Boogie Wonderland nearly had me up on the floor – and then the DJ put on Mory Kanté’s Yeke yeke, and I’m a pure divil for African / electronic dance music, so up I got and joined the redhead on the floor. So then there were two redheads in nerdy glasses giving it socks on the dancefloor. The other ladies stared a bit but I never mind that. The song, an extended dance remix, ended and was followed by a boring one, so I sat down, but I am a lot less fit than I thought and I worried for my health: I went home shortly afterwards and I kept the phone on my lap in case I had to phone a cardiac ambulance in a hurry. Melodramatic? Possibly, but I felt most over-exerted. I’ll have to up my fitness regime a bit (from nothing at all to something).

There’ll be another night like this one – it was a roaring success – and I can’t wait to draw the band rehearse.

Trumpets, music, paints and my pens…my kind of showtime.

I use various types of watercolour paper, but one I come back to a lot is by Langton, available here from Dick Blick :-