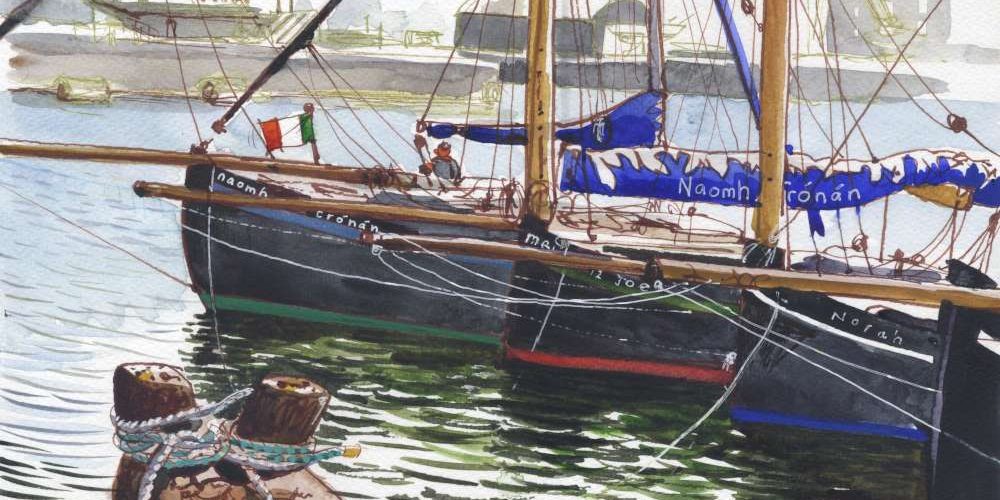 Last January I announced two urban sketching workshops for the month of August. Each would last two and a half days and would take place in Galway City. The last one I had run was late in 2019, which is a big gap – this one would be just short of three years later. Since 2015 I have conducted many urban sketching workshops in Galway City, from private one-on-one sessions, to larger workshops, including one in which two other sketching instructors and I had 45 sketchers between us. I have changed the student numbers per class since then, and this time I tried something new – just six in a group, but run over two consecutive weekends to make it worth all the planning. The only issue would be stamina, but as it turned out, I felt full of energy from start to finish…in fact I found the groups energising, as they are, like me, passionate about urban sketching and no detail was too trivial or boring for them. Add bright, sparkly personalities and it makes for a very fun time together. Kind of like when you were a student and you went on a field trip together – except better because someone else is cooking your breakfast and putting fresh linen on your bed while you’re out (I must go on a sketching workshop myself soon!)

I meet the sketchers for a meal in a charming Spanish restaurant on Middle Street. The food is delicious and I wear my special urban sketching skirt. Let me tell you what makes it my special urban sketching skirt. Over the years, from the time he was about 13, I have taken my son Paddy to the barbershop to have his hair cut. In order to stave off boredom as we waited in line, and then after that as he was coiffed, I would sketch in ink and watercolour. It started out in Professional Barbers and Fat Tony’s, and when Ali, one of the barbers in Professional Barbers, opened up his own premises, it continued there. Then the time came that Paddy felt he was a bit old to have his mum sitting behind him, and I didn’t have any more occasion to sketch barbers at work. But I had amassed so many sketches of barbershops by then that I was able to pick out about eight or ten that harmonised with each other, and only contained Payne’s grey for the blacks and greys, yellows for the lighting and reds for the pops of colour that most barbers have by way of decoration. There were also shades of skin from Irish pasty white and pale pink to Mediterranean and Middle Eastern olive and gold. They all looked wonderful together and I thought they’d make lovely fabric. In my mind’s eye I could see a skirt, a pair of men’s swimming trunks and many little pencil-pen pouches taking shape under my sewing machine. As usual, I was heartily sick of sewing by the time I got through all these ambitious projects, and my house was an utter mess of threads and scraps with bits of Ali’s face on them, but I have the skirt to show for it, Paddy has the swimming trunks and all the contributors to my second book (Drawing Expressive People) have the pouches. I wear the skirt proudly whenever I am somewhere warm, that’s full of sketchers. I very much like Ali, he’s a lively and enthusiastic guy, and it was fun to waltz into his barber shop one day wearing the skirt.

I had the great pleasure of choosing places to meet in the morning before the day’s sketching began. It was easy to choose – the tearooms at Corrib House on the river at Woodquay is just the nicest place, beautifully restored to its Georgian grandeur. Polished pitch-pine floors, comfy seating, large windows overlooking the river and wonderful staff make it special to be there, but the food is excellent. From the banana pancakes and eggs benedict to the poached eggs on mashed avocado with smoked salmon, it’s all mouth-watering – I have been there mostly for brunch, but I have memories of lovely lunches too.

I arrived a little early and did a quick sketch of Corrib House. I have discussed the technique I used in an article on Substack: that’s my new go-to place for writing, as writers can boost their income by posting articles for paying subscribers there. There are always free articles, but I like to reward the people who support me with detailed descriptions of my technique. So if you’re keen to look under the hood, that’s where you’ll find all my sketching secrets.

I went back to finish the sketch the next morning before class. Just as I was finishing up, one of the very lovely staff came out to see what I was up to. She was enchanted and invited me in for a coffee…this is typical of the experience of an urban sketcher. When you’re out sketching, there is very often a kind person who wants to say thank you with food or drink – a simple, generous gesture that always means so much. It’s not about the artist making something spectacular or skillful – every sketcher experiences this, regardless of where they are on their journey. It’s something to do with the joy of watching one’s fellow man performing a creative task. At least that’s what I think it’s about.

Friday morning was a little wet, so after being shown warm hospitality in Corrib House, our first stop was to Galway City Museum, which is always rich with tidbits of local history. I sent the students off to complete their first task, which was to create vignettes of Galway’s past, in as creative way as they could think of. I’m not sure I was hugely creative with my sketch of the harp, and I am sure that I stuck on the postcard of Old Galway crooked, but I like the result anyway. Next rainy day I will return, move the postcard out a little and make some white space, upon which I will do something absolutely show-stopping. One of the wonderful things about sketching is that the next sketch is always going to be amazing.

When one of my students, Geri, had come in from the US two days earlier, we took a stroll down to Galway Docks. The sun was strong and there wasn’t a breath of wind. Lined up against the quay were Galway Hookers, the traditional wooden boats that were used for centuries to bring turf for fuel from Connemara to my side of Galway Bay, where it was traded for produce. Dramatically beautiful though it may be, the land isn’t very fertile in Connemara. (There’s a saying in Ireland: “You can’t eat scenery”. Turns out some of us can, though, if we’re also able to explain how to capture it in art.) As Geri and I walked along the quay we met a tanned, weathered man with a gorgeous head of silver-grey hair. He was called Peter and he was chatty and forthcoming. Peter assured me that the hookers would still be in the harbour over the weekend, as it was looking like being too windy to sail across the bay for the annual race. That was great news for me and my sketchers, but I hoped the boats would get out sometime – I’ve seen them in action and there is nothing like the sight of these boats in full sail thundering across the bay like so many racehorses. At rest, we could see how perfectly maintained they were: immaculate paintwork, bright white lettering and sturdy, varnished masts and bow sprits.

And so we sat at the Docks in warm sunshine on Friday afternoon, the sketchers offering suncream to each other. The fact that I hate greasy suncream handprints on my paper might go some of the way to explaining my sun-damaged arms and face. I need to do better.

The market in Galway takes place on Saturdays all year round, and on Fridays, Saturdays and Sundays during the months of July and August. The atmosphere was incredible this Saturday, choc-a-bloc and so full of happy people who had come in partly for the gorgeous offerings of crafts, food and drink to be had but also for the sheer atmosphere of the place. I had a nice little plan for the sketchers and they took up positions in different corners of the market.

I decided to sketch in the same way that I had advised the students, so that I could see if the method was accessible to everyone. I “drew” the juice stall and it was a pleasure to listen to the care with which the young woman served the customers. She would ask them what they were in the mood for, a pick-me-up or something sweet, and she’d recommend the juice she thought they would best like. It was charming.

A little later I sat beside my student Geri. An elderly man stopped to look. He had large light bkue eyes peering over his light blue face mask. Geri told him I was the teacher. He looked from one sketch to the other, and back again, and then said “Sure ’tis soon the student will be teachng the teacher.” Geri wasn’t having her teacher shown even the hint of disrespect and immediately retorted, “Not in your lifetime!” at which we guffawed loudly (and probably disrespectfully). “Or in mine!” she added, to soften it somewhat. The old gentleman was nonplussed. “You’re a right pair,” he said, “I’d better go while I’m ahead.” I would say he was rather behind by that point, but it was all gentle fun. Unlike Geri, I can never think of anything witty to say…until a very long time afterwards.

It began to rain close to lunch time, and by the time we reconvened for the afternoon session the rain had become a downpour. We were welcomed into the warm and dry Galway City Distillery on Merchant’s Road. Inside there was a little ante-room, reminiscent of a very tasteful version of a school chemistry lab, except with shiny hammered copper vats and flasks rather than bunsen burners on the wooden benches. This was where the Distillery conducted their gin workshops. I have heard you get to pick your gin flavours from a range of herbs and botanicals…it sounds like a lot of fun. (In the market a week later I ran into the very smiley proprietor Martin, and asked him to tell me a little about the workshops, as I am trying to get my sister-in-law and her husband over from the UK to join one some weekend. “The first thing you need to know,” he said, “is that you won’t be driving anywhere that day…”)

We were back in the Distillery the next morning, where I did a demo for the class: I wanted to explain my approach in a direct, practical way. I thought the subject of reflections would interest them (and I knew it would be dramatic to watch taking shape) and it was fun to paint with the wonderful students standing behind my back in that funny little gin lab, enjoying the show.

The sun came out with a vengeance in the middle of the morning and we made our way to the River Corrib and the Long Walk. There we remained until the end of the workshop, sitting in the warm sun, in companionable silence. A few of us decided to stick around to sketch for the afternoon, and far in the distance, under the deep blue, cloudless sky we could just make out a line of Galway Hookers making their way across the bay…and, with almost no wind, they were not remotely like racehorses. Still beautiful though.

The following week I welcomed a second group of students to Galway – all from North America. Find out what we sketched in my next blog!